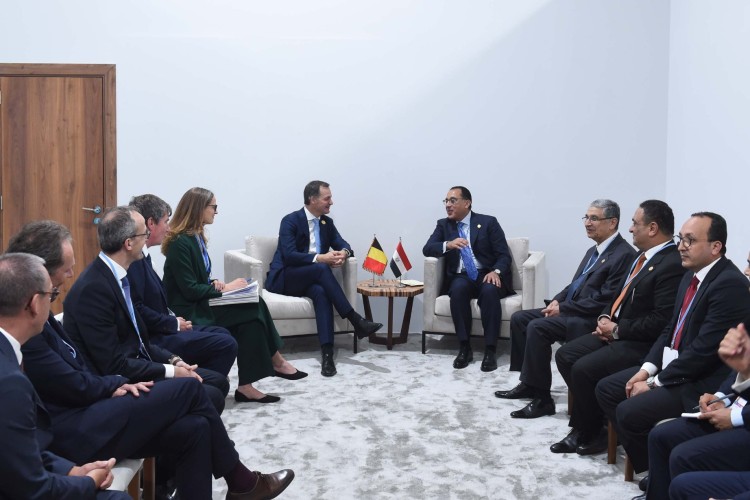 Egyptian Prime Minister Mostafa Madbouly and Belgian Prime Minister Alexander De Croo held a meeting with representatives from an alliance of Belgian companies specialized in the field of energy and green hydrogen, including DEME Group, Fluxys, and Port of Antwerp.

The meeting took place on the sidelines of the activities of the first day of the COP27 and was attended by Mohamed Shaker, Minister of Electricity and Renewable Energy.

Madbouly began the meeting by welcoming the Belgian alliance, noting that Egypt has promising opportunities in the fields of green hydrogen and renewable energy. He expressed Egypt’s aspiration to benefit from the expertise of Belgian companies specialized in this field, and that the government is ready to provide various means of support to increase investments in green hydrogen.

During the meeting, representatives of the Belgian companies affirmed their aspiration and interest in cooperating with the electricity and renewable energy sector in Egypt; especially in light of Europe’s great interest in expanding green hydrogen production, transporting and storing it as part of efforts to remove and reduce the proportion of carbon in the air, and their keenness to cooperate with Egypt in this field due to its ideal natural characteristics and resources for the success of this trend, in addition to the favorable investment and development climate that Egypt currently enjoys.

The Belgian representatives stated that they have a feasibility study to work on establishing a center for the production and storage of green hydrogen and its intermediates on the Mediterranean coast, in addition to electrolysis devices with a capacity of 500 megawatts, in an area located near the commercial port of Jarjoub in Matrouh Governorate, whose production will be allocated for export to Europe.

The renewable energy part of the project consists of both solar and wind energy. The first phase is planned to produce 700 MW of wind energy and 800 MW of solar energy.

The Belgian representatives explained that the project, in its first phase, will avoid 600,000 tons of carbon dioxide, or the equivalent of emissions from 150,000 cars, from the climate.

They pointed out that the project will provide more than 2,000 job opportunities during its establishment and more than 500 permanent jobs during its operation, along with many indirect jobs, and will enhance the economies of the entire region.

For his part, Shaker stated that work would be done to finalize the discussion of all the details of the project, in preparation for agreement on its various aspects as soon as possible.