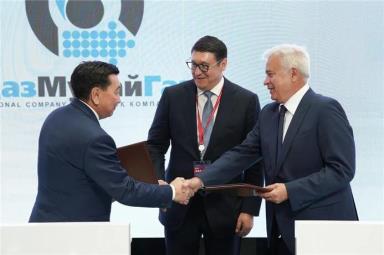 President of PJSC LUKOIL, Vagit Alekperov, and Chairman of the Management Board of JSC NC KazMunayGas, Alik Aidarbayev, signed a sale and purchase agreement for a 49.99% stake in the charter capital of Al-Farabi Operating LLP, at the St. Petersburg International Economic Forum (SPIEF), according to LUKOIL’s press release.

LUKOIL will join the exploration and production project on the Al-Farabi block (previously known as I-P-2 block) in the Kazakhstan Sector of the Caspian Sea. A Head of Agreement on the project was signed at the SPIEF in 2019.

The companies’ decision to collaborate on the development of the Al-Farabi block is another step forward in their long-term beneficial collaboration.

LUKOIL, the Ministry of Energy of the Republic of Kazakhstan, and KazMunayGas had previously signed a contract for hydrocarbon exploration and production on the Zhenis block.

Additionally, LUKOIL and KazMunayGas are strategic partners in the large-scale Karachaganak and Tengiz projects, in joint ventures that develop the Khvalynskoye and Tsentralnoye fields, as well as in the Caspian Pipeline Consortium oil transportation project.