Iran Could Become Conduit of Turkmenistan Gas Headed for EU 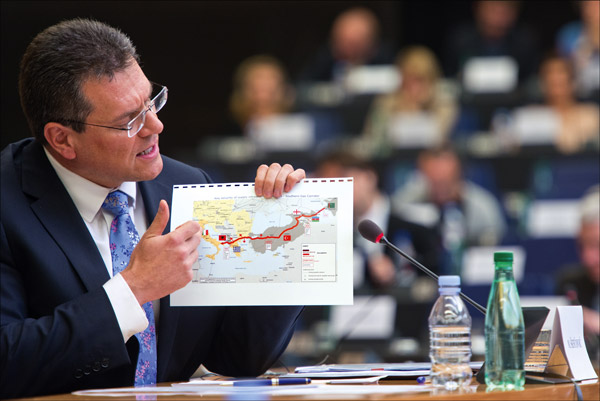 EU’s energy chief says he has discussed the possibility of transiting Turkmenistan’s gas via Iran with the Central Asian state’s leader.

The two discussed the idea of building a pipeline through Iran “since diplomatic relations with Iran are developing positively”.

Iran and the P3+3 group of countries are currently holding talks in New York on a final draft deal which would put their decades of differences over Tehran’s nuclear program to rest.

EU Energy Commissioner Miguel Arias Canete has also said Europe was keeping the possibility of importing gas from Iran open as it seeks to diversify sources of energy.

“It’s clear that if finally there is in the month of June a final agreement with Iran, it opens new possibilities in the future,” he said earlier this month.

The Europeans are currently promoting a trans-Caspian pipeline to ship Turkmenistan’s gas to Azerbaijan.

More importantly, the legal regime of the inland sea is a matter of dispute among its littoral states, namely Iran, Russia, Kazakhstan, Azerbaijan and Turkmenistan.

The Europeans are currently working on the “Southern Corridor” route to transfer Azerbaijan’s gas. However, the country does not have enough gas to make the pipeline viable and that is where other Caspian states come to the picture.

Sefcovic said, “The European Union expects natural gas supplies from the Caspian region to Europe to begin in 2019-2020.”

Iran has already an operational gas pipeline with Turkmenistan and another with Turkey.

Turkmenistan, which has a land border Iran, possesses the fourth largest reserves of natural gas in the world.

The Europeans are looking for alternative sources of energy as tensions rise with Russia which is their biggest supplier of gas.