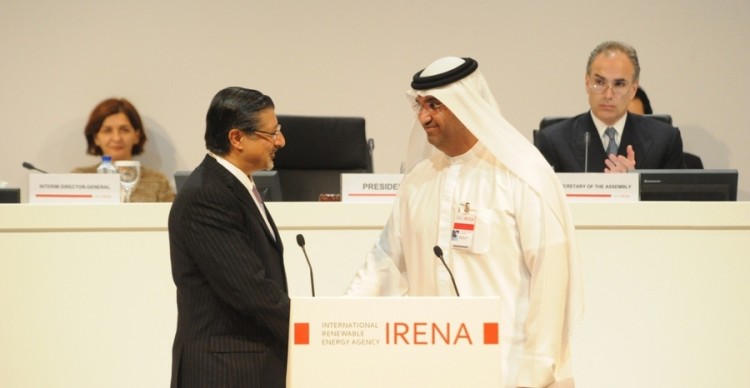 Realizing the renewable energy targets of the Gulf Cooperation Council region (GCC) will result in a 22% reduction in water consumption for power generation and associated fuel extraction, according to a new report by the International Renewable Energy Agency (Irena).

The water saving potential of renewable energy is among the major findings in the report titled “Renewable Energy in the Water, Energy and Food Nexus” released on Wednesday on the sidelines of the World Future Energy Summit and International Water Summit in Abu Dhabi. The report provides a detailed analysis of how renewable energy can help address some of the most pressing challenges across the water, energy and food sectors.
During the power generation stage, water needs for solar photovoltaics and wind are negligible compared to conventional thermoelectric generation where substantial quantities of water are needed for cooling. During this stage, solar PV or wind could withdraw up to 200 times less water than a coal power plant to produce the same amount of electricity. In a region where water is scarce and expensive, this would lead to substantial cost savings.
“Globally, an energy system with substantial shares of renewables, in particular solar photovoltaics and wind power, would save significant amounts of water, thereby reducing strains on limited water resources,” said Irena Director-General Adnan Z. Ameen.

“Until now, detailed knowledge on the role of renewable energy at the intersection of energy, food and water has been limited. But this first-of-its-kind report shows that in addition to enhancing energy security, improving air quality, reducing carbon emissions and creating jobs, greater deployment of existing renewable energy technology can also bolster water and food security.”