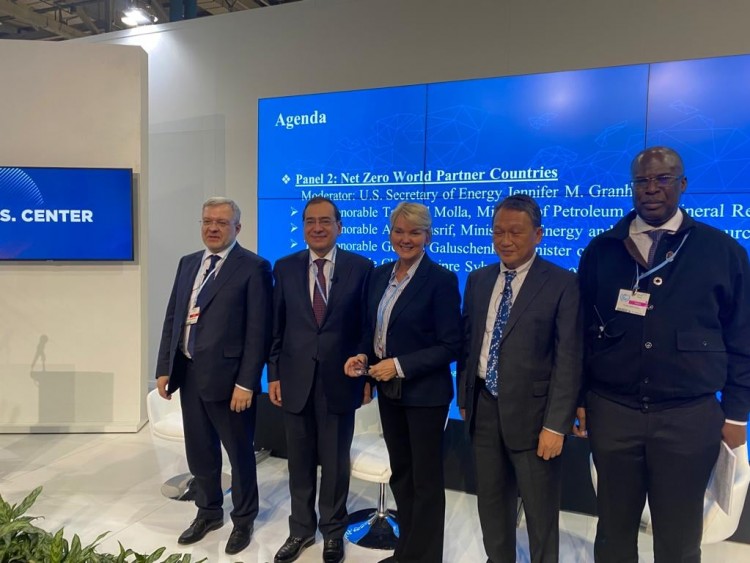 The Minister of Petroleum and Mineral Resources Tarek El Molla has participated in the launch of the Net Zero World Initiative, which was launched by the United States on the sidelines of the current COP26 summit held in Glasgow to accelerate the transition to net-zero energy resources, a press release announced.

During his participation in a discussion panel moderated by the American Energy Minister Jennifer M. Granholm, El Molla affirmed that Egypt follows an ambitious strategy in its transition to using clean energy and reducing carbon dioxide emissions, as a part of its sustainable development vision Egypt 2030.

He added that this strategy adopts three pillars, including the promotion of natural gas as fuel, preparing a national plan to expand the use of hydrogen as an alternative, and maximizing the usage of renewable energy resources (solar/wind energy).

The minister explained that Egypt started to push the widespread use of natural gas since 2016, which is reflected in the amount of its consumption that doubled three times since 2000 to represent 65% of hydrocarbon consumption compared to 40% in 2000.

El Molla has also highlighted the initiative to expand natural gas connections to houses to replace butane. This succeeded in connecting natural gas to 12.5 million housing units and converting 400,000 cars to run on compressed natural gas (CNG), in addition to using natural gas in 90% of electricity stations.

Additionally, El Molla said that Egypt is preparing a strategy to produce blue hydrogen in the medium and short-term and will eventually produce green hydrogen in the end.  He also highlighted that the country adopted an ambitious program to generate 42% of its electricity from new and renewable energy by 2030.

El Molla confirmed Egypt’s commitment to the principles of the COP26 summit, expressing its desire to host next COP27 on behalf of Africa.