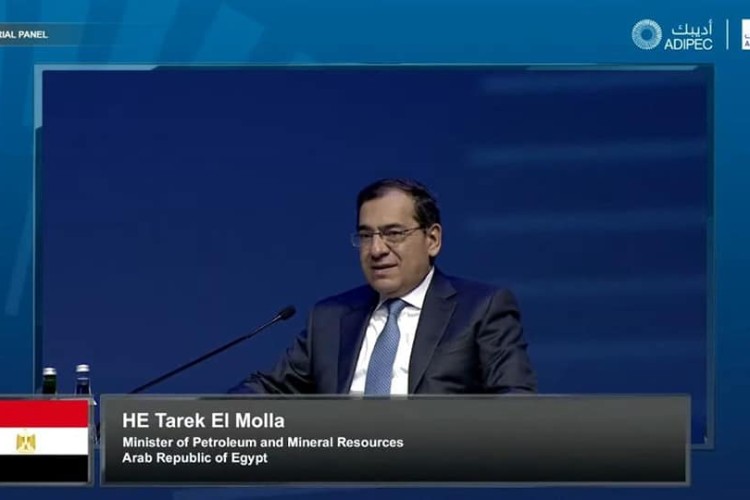 Minister of Petroleum and Mineral Resources, Tarek El Molla, participated in the opening of the Abu Dhabi International Petroleum Exhibition & Conference (ADIPEC 2022) on October 31st, in the UAE capital, the ministry said in a statement.
ADIPEC 2022 was inaugurated by Sultan Al Jaber, Minister of Industry and Advanced Technology in the UAE, in the presence of a large group of energy ministers in the world, heads of major international energy companies, and experts.
The opening of the conference witnessed a ministerial session entitled ‘A Secure and Sustainable Energy Transition’ in which El Molla participated along with Suhail Al Mazrouei, Minister of Energy and Infrastructure of the UAE, Shri Hardeep Singh Puri, Minister of Petroleum and Gas of India, and Amos Hochstein, the US presidential envoy for energy.
In his speech during the session, El Molla reviewed Egypt’s strategy to secure energy supplies and how to link it to achieving the energy transition towards sources with less carbon emissions, explaining that Egypt is working in parallel in all paths of developing energy sources of various types, whether traditional, especially natural gas, or renewable sources of solar and wind energy.

In this context, El Molla referred to securing additional quantities of natural gas and benefiting from them in increasing Egypt’s exports, in addition to maximizing cooperation with the countries of the Eastern Mediterranean Gas Forum (EMGF) to benefit from gas resources, and that Egypt has an ambitious plan to raise the contribution of renewable energy in electricity generation to 40% by 2030.
For his part, Al Mazrouei stated that talking about energy is not limited to oil, but the challenges facing the world now call for looking at gas and other energy sources, especially renewable energy sources such as hydrogen and wind, noting that his country and the OPEC countries are keen to meet the needs of the world in the energy transition efforts, but he stressed the importance of the rest of the producing countries playing their role in encouraging investment in renewable energy sources and noted that the UAE is currently focusing on diversifying its energy sources, reducing emissions and rationalizing consumption.