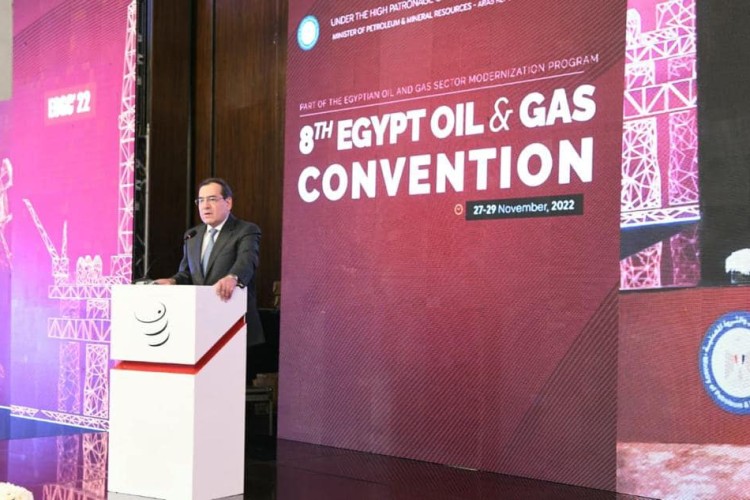 Minister of Petroleum and Mineral Resources Tarek El Molla stated that the petroleum sector’s successes came from cooperation, interdependence, and teamwork on an integrated program in partnership between the sector’s entities with the state, the private sector and international companies, with the full support of President Abdel Fattah El Sisi, the government and everyone’s belief in the message, vision and cooperation together, then we succeeded in expressing ourselves and our industry.

El Molla’s statement came during his opening speech of the 8th Egypt Oil & Gas Convention held in Cairo, to discuss efforts to achieve a balance between the sustainability of securing energy supplies and work to reduce emissions.

The sector should work as one team and aim to achieve more success, El Molla noted. El Molla explained that achieving this goal requires the concerted efforts of everyone to accelerate its achievement and translate all ideas into executive steps at a rapid pace to exploit the country’s natural resources and move towards carbon removal in connection with the important participation of the oil and gas sector in the successful COP27 that Egypt recently hosted.

The oil and gas sector has talented and experienced human capital that enables it to achieve its targets, El Molla stated, adding that there is belief and confidence in their abilities and working on benefiting from them.
El Molla pointed out the sector’s keenness to find working mechanisms and cooperation platforms to maximize work with its global partners, with the aim of making optimal use of its natural resources, capabilities and cadres.

During a live interview, with questions from the audience, El Molla referred to the idea of ​​establishing an Eastern Mediterranean Gas Forum (EMGF), which came from the vision adopted by the ministry in 2016 to transform Egypt into a regional energy hub. Among the goals is to benefit from Egypt’s location, gas resources, and infrastructure, including liquefaction plants and exporting natural gas, which was only achieved by the return of stability and investment in the petroleum sector and finding solutions to all arbitration cases.

The minister stated that all these efforts made Egypt one of the ready solutions to meet part of the demand for natural gas for European markets, as it exported about 7 million tons of liquefied natural gas (LNG) last year, 80% of which was for the European Union (EU) markets. This year it will increase to about 8 million tons, 90% of them for the EU markets as well.

The convention witnessed the handing out of awards in the fields of operations efficiency in brownfields, where WEPCO won first place for its efforts to double the production of the Badr 1 fields, and Kuwait Energy won second place for its integrated strategy to develop the brownfields in Ras Ghareb. Meanwhile, for the Emissions Reduction Award, Apache Company won first place for its achievement of reducing emissions by 40% of the flare gases in all its operations in Egypt, and Agiba Company won second place for its project in Mleiha. Additionally, the Excellence Award in Community Development Projects was won by the Ministry and EGAS and IEOC, a subsidiary of the Italian company ENI, for the Technological School of Zohr field. Kuwait Energy won second place for the Mother and Child Care Unit Clinics project in Ras Ghareb.