Schlumberger officials have updated the government about the recent developments regarding the company’s seismic surveys in the Red Sea and Gulf of Suez, Egypt Oil & Gas reports.

The company representatives told Minister of Petroleum Tarek El Molla that these surveys will open the door for the ministry to offer more exploration and production (E&P) bid rounds.

During the meeting they also discussed the developments in the new electronic portal the ministry is developing to help market and facilitate its bid rounds. Schlumberger is one of the companies collaborating with the government on this project.

El Molla invited Schlumberger to attend the ministry’s international conference which will take place in November in Hurghada.

He raised the possibility of using Schlumberger’s technical expertise to benefit the ministry’s Modernization Program, particularly in tthe training and development of workers.

Schlumberger’s president for Northern Middle East, Maen Razouqi, stressed that investment in Egypt is one of the company’s priorities in the regions.

The meeting was attended by the company’s Managing Director in Egypt and East Mediterranean Karim Badawi along with the oil minister deputy for agreements and explorations Ashraf Farag. 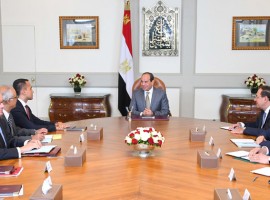