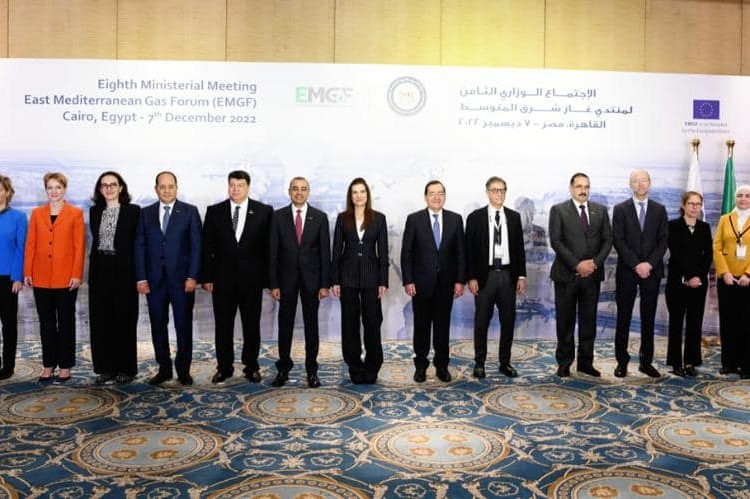 Egypt hosted the Eastern Mediterranean Gas Forum’s (EMGF) Eighth Ministerial Meeting in Cairo on December 7th, where Tarek El Molla, Minister of Petroleum and Mineral Resources, received the presidency of the next session of the forum during the year 2023 from the current president of the forum in 2022, Natasa Pilides, the Cypriot Minister of Energy and Industry, the Egyptian ministry said in a statement.

The meeting was attended by Osama Mobarez, Secretary-General of the Forum, and heads of delegations from Greece, Italy, Jordan, Israel and France, and among the observer members are the delegations of United States, the European Union (EU) Energy Commission, and the World Bank (WB).

In his opening speech, El Molla stated that the current events and the global energy situation demonstrated the importance of the proactive step taken by establishing the EMGF. The forum presented an important initiative and study in the field of reducing emissions and gas industry’s decarbonization for the first time during the COP27 climate summit. It also provided an important aspect of the global energy supply during the current period, which is witnessing many challenges.

Pilides also reviewed the achievements of the forum and its influential activities during the year 2022, and the presentation of important studies, especially with regard to energy transition and carbon removal.

Mobarez stated that the forum focused during the year 2022 on achieving two main goals, which are energy security and the energy transition, and that the challenges that arose during this year pushed the forum for more cooperation and dialogue with all parties to achieve common interests for all.

Meanwhile, Zafer Milhem, Chairman of the Palestinian Energy and Natural Resources Authority, expressed the appreciation of the Palestinian president and government for Egyptian President Abdel Fattah El Sisi for the great support and efforts made regarding the Gaza Marine gas field and the progress made regarding its development in cooperation with the Egyptian Natural Gas Holding Company (EGAS) and the important agreements signed between the parties, highlighting the importance of ensuring Palestine’s right to manage and develop its resources like other countries, which was the goal of Palestine to join the forum.

Commenting on the speech, El Molla pointed out that the start of work in developing the Gaza Marine gas field through the signing of an Egyptian-Palestinian memorandum of understanding (MoU) is one of the impressive results of the EMGF, as this step took place under the auspices of the forum, which highlights its extreme importance.

The heads of the participating delegations emphasized in their speeches the vital role of the forum and its adoption of fair goals, including support for the rights of countries to exploit their resources, the role of the forum in securing part of the global energy supply, its openness to exploiting new and renewable energies, increasing its contribution to the global energy mix, and presenting important initiatives and studies in the field of reducing emissions.