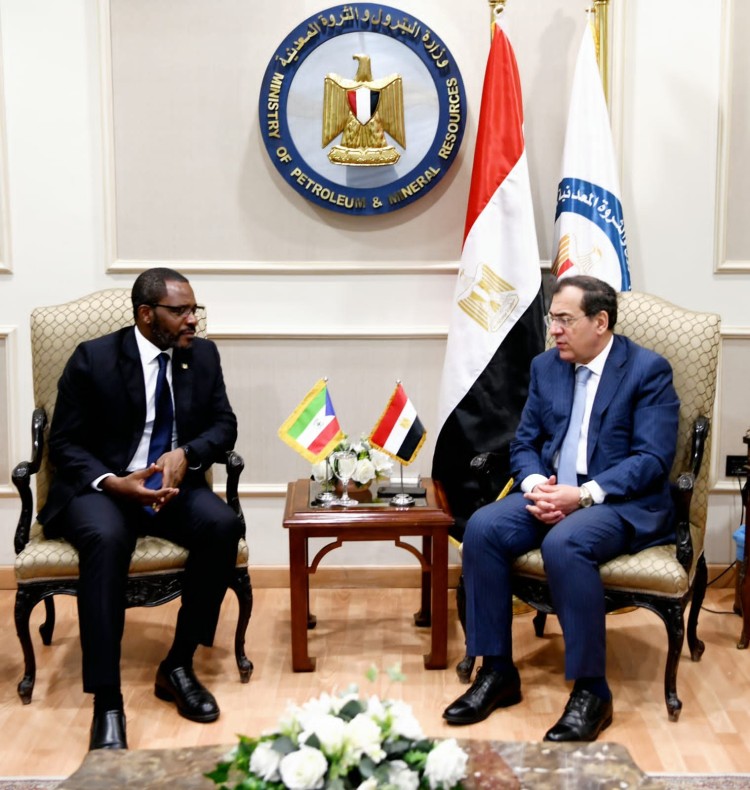 Minister of Petroleum and Mineral Resources Tarek El Molla met with Gabriel Obiang Lima, Minister of Minerals and Hydrocarbons of Equatorial Guinea, to discuss ways to support cooperation between the two countries within the framework of Egypt’s desire to increase and strengthen cooperation with African countries.

During the talks, El Molla pointed out the importance of supporting and strengthening Egyptian cooperation with African countries, stating that the petroleum sector is ready to transfer the expertise gained by Egyptian companies in various fields of oil and gas. This is especially in technologies for converting cars to be fueled with compressed natural gas (CNG) as well as training technicians in this field, in addition to providing all aspects of support for the development of gas infrastructure projects in Equatorial Guinea.

The meeting tackled procedures for activating the memorandum of understanding (MoU) that was signed with Petrojet to implement new petroleum projects in Equatorial Guinea, foremost of which is the project to establish a new refinery. El Molla stated that an economic feasibility study for the project is currently being prepared and all data and information required to be included in the final agreement between the two sides.

Meanwhile, Lima expressed his country’s strong desire to benefit from Egyptian expertise, especially in the field of transporting liquefied natural gas (LNG) from its production sites in the capital of Equatorial Guinea through specialized marine tankers. This is in addition to studying the possibility of converting a cement factory in Guinea to work on natural gas, which requires the recruitment of experts and technicians from Egypt to operate and manage the factory during the coming period.

Lima stated that during his visit to Egypt, he expects to complete all agreements and memoranda of understanding (MoUs) with Petrojet to reach a final agreement to implement the refinery.

Moreover, Lima affirmed his country’s desire to seek the assistance of Egyptian petroleum services companies due to its great experience in managing and operating projects.

During the meeting, the two ministers discussed the situation of the global oil and gas markets, the current changes they are witnessing, and the challenges facing the producing countries. They also discussed preparations for COP27, which will be hosted by Egypt next November, concerning climate change, energy transition efforts, and environmental preservation. The meeting highlighted the continuation of efforts to prepare for the Egyptian initiative to develop the energy transition in Africa, in cooperation with African ministries and institutions, to be launched during the summit.

Lima stated that African countries need to attract investments in the field of oil and gas during the transitional period, pointing out the importance of benefiting from Africa’s rich resources before moving forward with the energy transition that developed countries are pushing for.