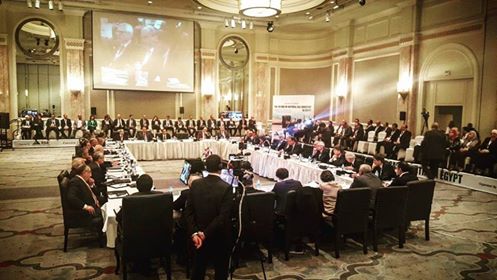 On the 23rd of February, the Egyptian Gas Association (EGA) held it’s first executive roundtable, titled “The Future of Natural Gas Industry in Egypt.”  The purpose of the roundtable was to bring together industry leaders from both the private and public sectors, allowing them to connect and collaborate on the different issues affecting the natural gas industry in Egypt.

During the discussion El Molla commented that EGPC is preparing for a new international bidround to be launched in the coming weeks, noting that the discovery of such a significant find as Zohr has encouraged international oil companies to boost their exploration and production activities.

The topics addressed at the roundtable centered around the prospects and challenges of exploration and production activities, different practices that would develop Egypt’s role as a regional natural gas hub, liberalizing the natural gas market, reform policies, and strategy to encourage investment in the sector.

The EGA’s scope focuses on working towards connecting and coordinating the positions of member companies on industry issues, fostering opportunities for personal interaction between member companies to facilitate information exchange, and most importantly, the association will take an active role in representing the unified voice of the industry to policy and decision makers.