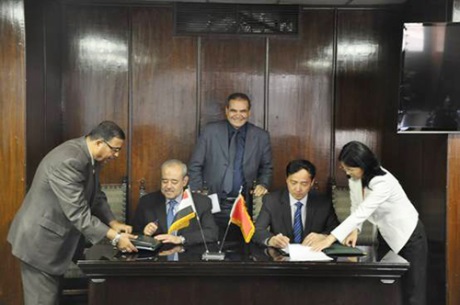 A memorandum of understanding (MOU) to cooperate in the construction of power reactors has been signed between China National Nuclear Corporation (CNNC) and the Egyptian Nuclear Power Plant Authority (NPPA).

The MOU was signed during a CNNC delegation’s visit to Egypt between 21 and 23 May. The signing was witnessed by Egypt’s first undersecretary of the ministry of electricity and renewable energy Hassan Mahmoud Hassanein.

In a statement CNNC said the signing of the MOU marks a new phase in work to develop nuclear energy in Egypt and that the company has now become “one of the official partners for Egypt’s nuclear power projects”.

In February, Egypt and Russia signed an MOU on the construction of a nuclear power plant in the North African country. Russian state nuclear corporation Rosatom and the Egyptian ministry of electricity and renewable energy “agreed to launch detailed discussions on the prospective project,” Rosatom said in a statement.

Rosatom subsidiary Rusatom Overseas and the NPPA signed a project development agreement for a nuclear power plant with a desalination facility.

The El-Dabaa site on Egypt’s Mediterranean coast was selected for a nuclear plant in 1983, but this scheme was scrapped after the Chernobyl accident in Ukraine. However, in 2006, the same site was named in plans to build a 1000 MWe reactor for electricity generation and water desalination by 2015, in a $1.5-$2 billion project that would be open to foreign participation.

Early in 2010 the proposal had expanded to four plants by 2025, the first costing about $4 billion and being on line in 2019 or 2020. Plans were put on hold in 2011 until the political situation stabilized following the ousting of former president Hosni Mubarak.