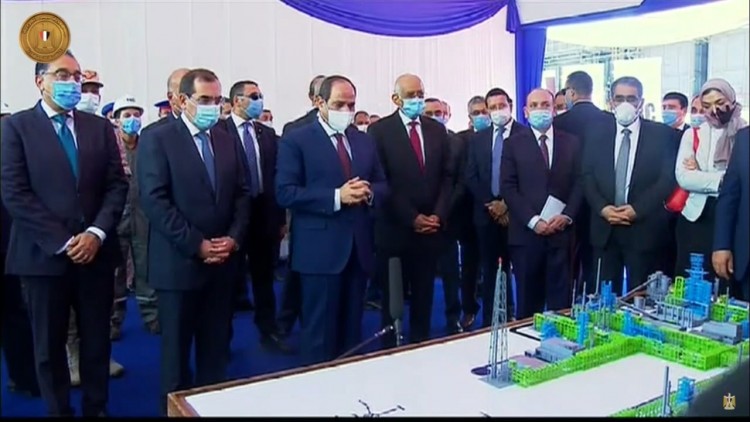 The Egyptian President Abdel Fattah Al-Sisi has inaugurated the Egyptian Refinery Company’s (ERC) project in Mostorod with investments of $4.3 billion, equivalent to EGP 70 billion, as it is one of the most important petroleum refineries in Egypt and Africa, producing 4.7 million tons of petroleum products per year, a press release issued by the Ministry of Petroleum and Mineral Resources reported.

This giant project comes in the framework of the ministry’s plan to increase production and reach self-sufficiency of petroleum products through establishing more updated refineries.

The Minister of Petroleum and Mineral Resources, Tarek El Molla, presented the strategy for infrastructure development in Egypt’s refineries, confirming the importance of the president’s support. According to El Molla, the ministry is updating the infrastructure for transporting, storing and shipping petroleum products at a cost of $3 billion equivalent to EGP 48 billion.

The minister elaborated that the Mostorod region is providing 22% of the refining capacity in Egypt, pointing out that Mostorod now includes two refining complexes, namely Cairo Oil Refinery and the Egyptian Refinery, and that the former provides the feedstock to the Egyptian complex.

Additionally, El Molla showcased the ongoing projects including complexes of octane and diesel project in Assiut at a cost of $5.7 billion equivalent to EGP 91 billion, and Midor refinery expansion which will add 4.9 million tons of petroleum products per year.

In parallel, El Molla laid 0ut the petroleum sector’s achievements in the past six years, elaborating that refineries used to provide 13.5 million tons of the products during the fiscal year (FY) 2013/2014 while the consumption was reaching about 21 million tons yearly. This led to the need for increasing production and the number of projects, including the expansion of Alexandria refining capacity and ERC’s capacity which added 4.3 million tons of main products at a cost of EGP 74 billion.

The minister pointed out that the most important projects during the period between 2016 to 2023 are five projects worth $10.2 billion equivalent to EGP 165 billion with production capacity of 9.2 million tons per year of products. He also noted that new projects will be implemented to cover the increase in consumption, on top of them are the project of National Red Sea Refining Company in addition to other expansions for established refineries.

El Molla mentioned that the ministry has been working on fulfilling self-sufficiency of petroleum products since 2016, where imports reached 10 million tons per year at a cost of $4.5 billion, noting that these rates declined during 2020 reaching 3.5 million tons with $1.5 billion.