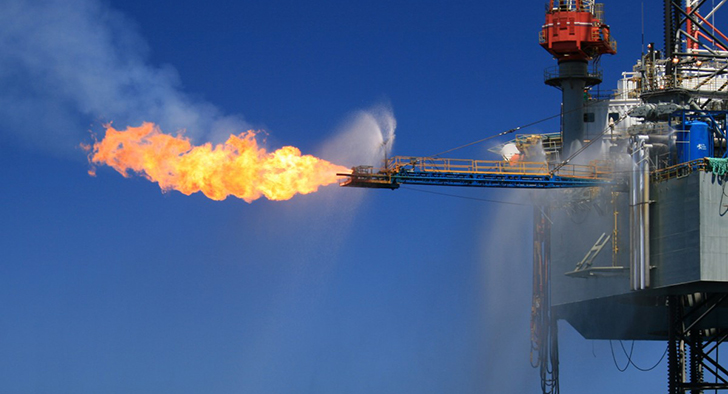 When environmental improvement promises economic prospect, the hesitation is hardly in place. An assumption that environmental responsibility is unattractive as it comes with higher investments has already been shattered. This is particularly visible in the practices of associated petroleum gas (APG) flaring, which is truly a global conundrum.

With some 143bcm of gas being flared annually, the world suffers from 350m tons of CO2 being emitted to the atmosphere, which significantly contributes to black carbon, while the burned gas could instead be utilized to generate 750 billion kW/h of electricity. On a global gas flaring map the Middle East and North Africa region accounts for the second highest regional concentration of gas flaring, after Russia and the Caspian Sea, with about 30bcm of gas wasted annually to burning.

In the region, Egypt contributes to total gas flaring with almost 2bcm every year, out of which 1.7bcm come from oil fields. The country ranks among the top twenty gas-flaring nations in the world. If we translate this to energy calculations and economic figures, Egypt burns away gas worth 5% of the country’s national energy needs, which would add between $300 and $500 million to its economy.

While the Egyptian oil sector is making some efforts to curb gas flaring, reduction plans urgently call for new complex solutions. Egypt’s gas flaring rates were declining only at a slow pace over the past decade. But if Egypt hopes to move out of the top 20 flarers list, spare much needed energy resources, and protect its investments, then there is lots of work that still needs to be done.

Satellite images of gas flaring in Egypt from 2012, cited by the European Bank for Reconstruction and Development (EBRD), show that the highest concentration of gas flaring is in North West and the Gulf of Suez fields with approximately 0.6bcm/year of burned gas at each site, while West records 0.5bcm/year. Uncertainty about the identified flaring posts prevails, however, as the Egyptian General Petroleum Company (EGPC) reports lower numbers, and the developments in the oil fields are not being monitored efficiently.

Based on preliminary data, for Egypt, economic and environmental benefits, associated with the elimination of gas flaring, are significant, as an overview of an EBRD study on gas flaring in Egypt states. The study was commissioned by the Bank and conducted in association with the Norwegian company, Carbon Limits.

As presented at the EBRD workshop in Cairo, zero gas flare in Egypt would generate less resource waste, value of which could amount to $130m a year given the current domestic gas price levels. Equally so, Egypt’s trade balance would be enhanced at a value of $600m if energy imports are avoided as country’s existing reserves of natural gas are utilized in a more efficient way to the contrast from gas flaring and gas venting.

In a climate change sensitive matrix, TorleifHaugland from Carbon Limits explained in a presentation at the Cairo thematic workshop in March this year, zero gas flaring in Egypt would reduce green house gasses (GHG) emissions by about 2% of the total national volume annually. This would necessarily be accompanied with lower local pollution, help improve health conditions, and eliminate devastating ecological impacts.

According to Haugland, “even with modest valuation, GHG benefits [from gas flaring elimination] are substantial compared to the value of recoverable gas.” Utilizing APG to be transferred to the market, instead of being burned, would increase the value of GHG reduction by considerable 21%. In case of using gas for power being connected to the national grid, benefits of GHG reduction would increase by additional 19%. If APG is used for power supplies, the currently flared gas could generate some 7tWh/year, which is 5% of the domestic electricity demand. The option to utilize associated gas in substitution for diesel for powering oil fields would raise the contribution to GHG reduction even higher, by as much as 42%.

Even though enhancing oil sector operations by reducing gas flaring requires significant amount of investments, lack of funds is not the only obstacle that the environmentalists and energy actors face in Egypt. The situation is far more complex.

Barriers that hamper gas flaring elimination efforts in the country are strongly tied to geographical, technological, structural, economic, and regulatory factors, as the EBRD study indicates.

The satellite images of gas flaring in Egypt clearly reveal that the situation is rather tricky.  A high number of small size gas flaring sites that are scattered in different locations distant from the national energy grid and produce variable volumes of gas flow weighs heavily on technological requirements that the oil field operators would need to tackle the challenge.

In addition, provided that the gas pricing environment does not change, the attractiveness of zero gas flare strategies is more difficult to achieve, because current gas prices do not reflect alternative value of gas that is being flared, according to the EBRD. Therefore, oil operators may find gas flaring and gas venting as an easy way out fast and instead they would choose to direct their investments elsewhere, targeting other areas of development such as technical improvements, human resources etc. As a result, the general trend towards ad-hoc flaring solutions in oil production fields in Egypt continues intensely.

This comes hand in hand with how the regulatory environment is set up. As experts noted at the workshop, state regulations for gas flaring in Egypt are still lagging behind in establishing a clear framework that would demand elimination of the practice.

Finding a financially viable path that would benefit the country in terms of environmental concerns, economic prospect, and social development may, nonetheless, be at hand.

For the model to be effective, the EBRD suggests that improvements in regulatory framework would be needed to considerably boost foreign investments in gas flaring reduction. This implies to define specific flaring rules, establish strict monitoring, reporting, and verification mechanisms with independent supervisory bodies, and provide preferential access to gas infrastructure for operators in order to enable them to utilize associated gas in more efficient ways. In addition, Carbon Limits elaborated further that enforcement mechanisms are to be introduced based on site specific economic evaluations. The role of a mutual dialogue between companies and regulatory authorities cannot be emphasized more, especially in the crucial stage that the Egyptian oil sector is currently experiencing.

Further, experts pointed out that the success of gas flare elimination is closely related to the adopted gas pricing policies. The EBRD report calculated that the internal rate of return (IRR) on investments in gas flaring could improve by 10 to 15 percentage points if the domestic prices increased from the current $2.65/mBtu to $4/mBtu. Presenting at the Cairo-held Intergas VII conference in November 2015, EBRD Senior Banker, de Lastours, also stated that gas flaring reduction investments realistically project so far unfavorable 15% IRR with the current domestic gas price. It seems that there is a potential to balloon up expected IRR for operators to as high as 40% under the gas price levels of around $6/mBtu and thus secure required funding for the zero gas flaring strategy.

On technological level, given the countries specificity in terms of small scattered and distant flaring sites, Egypt would need to opt for deploying small-scale, cost-effective, and modular technologies, as opposed to building expensive gas pipeline infrastructure. Trucking of CNG is expected to become more important with shifts to stranded gas from the Western Desert, the EBRD preliminary findings project. These efforts would thus accompany ongoing projects in gas flaring reduction from large sites that the EBRD had funded in Egypt in the last two years, worth more than $200m in total.

As Terry McCallion, EBRD Director for Energy Efficiency and Climate Change, explained in a recent EBRD press release: “In the future, flaring in Egypt will increasingly come from smaller production sites, which are often in remote locations. This represents a challenge in terms of finding economically viable solutions. However, new technologies and business approaches are emerging that can make previously uneconomical investments commercially attractive as well as delivering good environmental impact.”

With funding and support, Egypt can join other countries in eliminating routine gas flaring, a goal which will benefit everyone.

Speaking at the EBRD workshop in March, Cristian Carraretto, EBRD Associate Director for Energy Efficiency and Climate Change, eloquently advocated for a much needed combined approach that would guarantee new industry standards in line with the goal aiming for energy efficiency and climate change improvements. Carraretto noted that “reduction of flaring is among the climate change mitigation opportunities raised by Egypt in the context of the COP21 in Paris, and energy efficiency and flaring reduction in the petroleum sector were announced in Egypt’s Intended Nationally Determined Contributions (INDC) under the Climate Convention.”

Egypt is doing its best to abide by the outlined climate change aware strategy, as Eng. Khaled Abdel Badie, the then-Chairman of the Egyptian Natural Gas Holding Company (EGAS) stated. According to Badie, the country aims at pursuing processes towards energy efficiency for a number of reasons, while environmental concerns are a major one. He added that another goal is to improve economics of gas processing facilities to preserve country’s natural resources for its domestic supply and thus aspire for a role model in the region in gas flaring reduction program.

According to expert estimations, Egypt will need a $2 billion investment to eliminate existing flares of the 2015 levels. Further, Carbon Limits stated that additional more than $2 billion in capital requirements would be sought for in order to curb routine gas flaring by 2020 if oil production levels stay constant at 700,000b/d. However, if Egypt marks a decline in produced oil to 500,000b/d, the actual investments would decrease to $1 billion. Similarly, investments in gas flaring reduction from new developments between 2020 and 2030 would rise to almost $3.5 billion, assuming unchanged oil production rates, but the required funds could drop to $2.5 billion if oil production decreases.

Having defined its clear targets in cooperation with international financial institutions, environmental firms, and oil companies, Egypt is still to adopt a full-fledged strategy and establish a clear framework, under which the country would aspire to become a zero gas flaring champion in the region and thus protect its financial reserves and the environment.