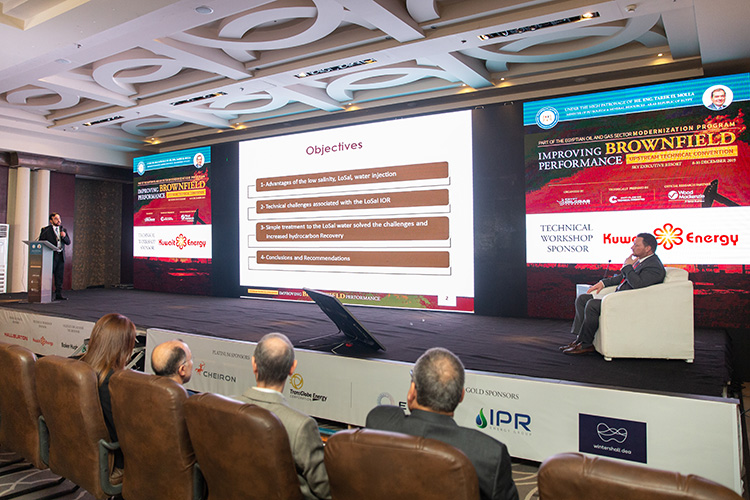 The second day of the convention included a workshop with five presentations on Innovations in Applied Technologies and was chaired by Colby Fuser, Vice President – Egypt and Libya at Halliburton.

Oraby explained that the AUC team conducted research that aims to solve challenges using low salinity (LoSal) water injection. “Low salinity water injection is not something new, people thought about it for some time,” Oraby noted, adding that it brings values of “increasing production, but increasing the production comes with some kind of challenges to the reservoir. Operators are actually injecting water that has different properties than the formation water. That mix will generate a huge challenge for both the new drilled wells” and the existing reserves.

Yet, using acids or alkaline would maintain the salinity of the LoSal water, attain a high recovery factor, reduce resistivity, and boost the Sigma of the LoSal to the exact level of the original water. Hence, treated LoSal water could be applied on several fields in Egypt to boost the hydrocarbon recovery, Oraby pointed out.

The solutions followed to tackle these challenges included; performing conventional coiled tubing work along with logging applications, as well as adopting advanced coiled tubing in order to allow the deployment of logging tools with surface readout and control, El-Farran explained.

“The company has performed this campaign with 27 runs of the coiled tubing, and six conventional clean outs with the same oil,” adding that they spent over 20 days in sour wells running six PLT, three RMT, and 12 perforation runs.

“With the running time, the company was able to increase the efficiency of operations running two perforating runs per day,” due to easy-to-connect tools, El-Farran noted. “The company saved 34% of the budget of this project, and was able to add 2000 barrels of oil per day (b/d) to this platform,” he added.

The third presentation of the workshop was conducted by Jose Isamberth, Senior Petroleum Engineer at Weatherford, under the title of Activate Field-wide Intelligence to Maximize Production.

Isamberth’s presentation tackled the role played by integrating brownfields in optimizing production, explaining that “integration is the key for success. Industry leaders need to develop more power users. They need to maintain a continuity of the identified tasks and processes,” he noted.

The presenter further discussed cloud computing and analytics that are now a reality in the oil and gas industry.

Isamberth presented a real case scenario of remote station debottlenecking, stating the objectives as identifying potential output gain through opening up healthy wells with developed station pressure limits, as well as recognizing the choked back healthy wells. This results in analyzing potential output gain under the debottlenecking condition, having healthy chocked back wells opened for surveillance, and carrying out slugging studies to locate the low station pressure source. The real case scenario proved that the usage of Asset Integrity Management (AIM) model helped in reducing debottleneck and boosting output gain by over 2.5%, and the method improve asset revenue objectives.

The presentation’s main objective is to “represent the application of automated drilling technologies to optimize the drilling performance in the Western Desert of Egypt,” Hussein stated.

The presentation was divided into three sections, starting with problem identification and deviation from ideality. Kortam discussed the difficulty of having dissatisfactory results from fracturing as it could damage reservoir permeability due to polymer leak-off as well as saturation changes. It could further decrease relative permeability changes generated by phase changes.

During the third section, Kortam pointed out that the new application in which the proppant mixture consists of 10% by weight of angular proppant and 90% by weight of spherical proppant, is characterized as bauxite material. The “new application is considered an image changer for optimum fracturing performance,” Kortam noted, as the new modified proppant type would fit all sandstone nature in any reservoir fluid.

The five technical presentations were rich with data, studies and innovative technologies that would help optimize Egypt’s brownfields in the near future.