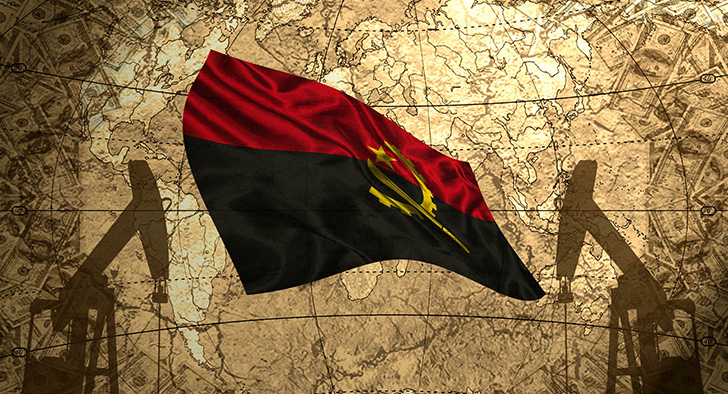 Located on the Atlantic coast in the southern part of Africa, the Republic of Angola unexpectedly overtook Nigeria as the top crude producer in Africa during the second half 2016. Yet, Angola did not enjoy its primary position for too long. Already in December 2016, Nigerian Bulletin reported that Nigeria’s oil output slightly surpassed that of Angola by 94,000 b/d.

The reasons behind Angola’s failure to preserve its spot as the top oil producer on the African continent relate to the structure of the country’s economy. As the African country heavily relies on oil to sustain the economy, Angola suffered a major structural shock in response to the persistence of low oil prices. Due to operational inefficiencies associated with the state-owned oil operator Sonangol, oil output has not grown significantly over the last two years. In fact, it fell short of the government’s 1.8mb/d target. The shock has deteriorated Angola’s macroeconomic stability. The local currency, kwanza, depreciated by 40% against the dollar since September 2014. This drove up inflation, which was projected to reach 30% year-over-year in 2016.

As Angola’s economic growth rate is driven by its oil sector, with oil production and its supporting activities contributing about 45% to Angola’s gross domestic product, the previous two years had already signaled that Angola will face major challenges in sustaining its primacy in the continental oil market. According to the World Bank, Angola’s oil exports in the last 10 years accounted on average for 97% of Angolan exports. In 2014, the share of oil in total export remained around the same level and oil exports brought in $60.2 billion in revenues to the country. However, already a year later in 2015, foreign currency inflow generated by oil exports was at $33.4 billion, which was a 44.5% decline.

The current state of the country’s economy, coupled with declining oil export revenues and political uncertainty as Angola’s President, Eduardo Dos Santos, would not seek re-election in 2017, begs the question whether or not Angola can regain its position as Africa’s top oil producer.

Angola initially discovered oil in 1955 onshore Kwanza basin. Since then, the country’s oil industry has grown substantially, despite a civil war that lasted from 1975 to 2002. According to the US Energy Information Administration’s (EIA) Country Report in May 2016, oil production in Angola comes mainly from fields offshore the coast of Cabinda and deepwater fields in the Lower Congo basin. Although onshore fields contribute some “small-scale” oil production, conflicts within the region have limited exploration and production in those areas.

Oil production gradually increased from the 1960s to the 1990s, reaching almost 750,000b/d by 2000. Angola brought the Chevron-operated Kuito field (Block 14), the country’s first deepwater field, online in late 1999. Since then, international oil companies (IOC), led by Total, Chevron, ExxonMobil, and BP, have started production at additional deepwater fields and are in the process of developing new ones. Accordingly, Angola’s oil output grew by an annual average of 15% from 2002 to 2008.

Nearly all of Angola’s oil production is exported because the country’s domestic refining capacity is limited. The majority of Angolan crude oil is medium-to-light in density, but some grades, such as Dalia, Pazflor, and Hungo, are heavy grades. According to Index Mundi, Angola’s crude export has been on an upward trajectory since 1986, with volumes peaking in 2010 at about 1.9mb/d, and in 2007, Angola became a member of the Organization of the Petroleum Exporting Countries (OPEC). EIA reported that Angola exported about 1.8mb/d of crude oil in 2015, with 60% of cargos going to Asia. Europe followed with 22%, then America with 14%, and lastly Africa with a minor 4%.

Angola has been the second-largest supplier of crude oil to China since 2005, behind Saudi Arabia. But in the country’s successful year of 2016, already in August, Angola surpassed its OPEC colleague, as well as Russia, to become the biggest exporter of oil to China with a daily average of 1.11mb/d, as Oil Price informed. The 23% increase was driven by higher demand from Chinese teapot refineries as they sought to take advantage of the cheaper Angolan oil, since the African blend trades below both Russia’s ESPO and the Middle East’s Dubai benchmark blends. Moreover, Angola accounted for 5% of total US crude oil imports between 2005 and 2009 as the African nation supplied the US with an annual average of 484,000b/d during the period. However, US imports of crude from Angola have been decreasing “in terms of the absolute volume and share.” In 2015, the US imported merely 124,000b/d of crude oil from the African country, accounting for less than 2% of total US crude imports.

Angola has been eager to sustain its primacy in the African market through new developments. The country is thus moving forward with its production expansion plans. Accordingly, several oil projects are to start production over the next few years, as EIA’s report read, however, the start dates may depend on the oil price environment.

The most notable projects to start are the CLOV, the West Hub development, the Kizomba Satellites Phase 2, and the Lianzi field.

Output from the CLOV project began in June 2014, as Total’s website informed, and it is to be enhanced. Located off the coast of Angola, the project comprises of four oil fields, namely Cravo, Lirio, Orquidea, and Violeta, with total reserves estimated at 505m barrels. Two types of crude are simultaneously extracted and EIA estimates that CLOV’s production capacity is 160,000b/d. The project consists of 34 subsea wells, situated in water depths of 1,100 to 1,400 meters, and a Floating Production, Storage and Offloading (FPSO) unit, which is “as large as three soccer fields” and a storage capacity of 1.8 million barrels of oil.

2014 also witnessed the start of production from Eni’s West Hub Development Project at Sangos, Cinguvu, and Mpungi fields, as well as subsequent development of the Mpungi North, Vandumbu, and Ochigufu fields. Offshore Technology informed the output from the Sangos field commenced in November 2014 and the Cinguvu oil field came on-stream in April 2015. The two fields were producing 60,000b/d of oil. The Mpungi field came online in January 2016, bringing the total oil production to 100,000b/d. These projects are also envisioned for further developments in the near future.

Angola also eyes two other projects by Esso and Chevron for expansion. Esso Exploration Angola, a subsidiary of ExxonMobil, started oil production ahead of schedule at the Kizomba Satellites Phase 2 project at the end of April 2015. Kizomba Satellites Phase 2 is a Block 15 subsea infrastructure development of Kakocha, Bavuca, and Mondo South fields. ExxonMobil was quoted by Oil&Gas Journal as saying that the project developed 190 million barrels of oil. At the time of the report, peak production was estimated at 70,000b/d of oil, and was expected to increase total Block 15 production to 350,000b/d. The project also relied on an FSPO at the Mondo South field, with the Kakocha and Bavuca tying back to the Kizomba B FPSO.

Chevron announced the first production from Lianzi Field, which is located in a unitized offshore zone between the Republic of Congo and the Republic of Angola, in early November 2015. At the time, the field was expected to produce an average of 40,000b/d of crude. The field includes a subsea production system and a 43km electrically heated flowline system, which transports the oil to the Benguela Belize-Lobito Tomboco platform located in Angola’s Block 14.

Furthermore, EIA stated that Angola has four offshore and deepwater oil projects expected to come online within 2017 and 2018. They have a total output plateau of 420,000b/d of crude. New capacity additions from the upcoming projects are more likely to sustain Angola’s crude oil production at or slightly above current levels over the medium term rather than provide a substantial boost to the country’s output, as several of the older deepwater fields are past their peak production. In addition, Angola is working on extra four projects with estimated production capacity of 325,000b/d. Yet, the fields do not have a specific date for their first oil, as they have not received a final investment decision (FID). EIA confirmed that despite global low oil prices, projects that are past the FID stage will not be canceled, because the procurement and construction phase has already started.

Obstacles on the Way

Yet, Angola’s path to petroleum supremacy was not spared difficulties, which necessarily translated into the current situation in which the country was overtaken by Nigeria. The state-oil company, Sonangol, which is a shareholder in almost all oil and gas projects, has been facing some challenges in recent months. News outlets, such as Oil Price, reported that the company could not afford basic supplies such as toilet paper. Moreover, in early 2016, Angolan President, Eduardo Dos Santos, who has been in the office since 1979, appointed his billionnaire daughter, Isabel, to chair a committee tasked with restructuring Sonangol and revamping the oil sector.

In a statement to the Financial Times, Ms dos Santos, outlined the challenges facing Sonangol after the oil price crash shredded profits and left it struggling to access foreign currency. A recent presentation showed that output would drop from 1.75mb/d in 2016 to reach 1.5mb/d by 2021. Accordingly, dos Santos highlighted that the firm would be divided into three separate units for exploration and production, logistics, and a division that handles Sonangol’s concessions with its IOC partners. In addition, the company was in talks with several international banks for a new financing model to meet a $1.6 billion payment shortfall, as the company might not have enough oil to service its debts at current prices.

Lastly, Angola’s commitment to cut production by 78,000b/d according to OPEC’s mandate, while Nigeria is exempted from this production freeze, further casts a shadow of doubt over Angola’s ability to regain its position as Africa’s top crude producer. Hence, for Angola to make progress in the oil sector, the country will need to design a new oil strategy.