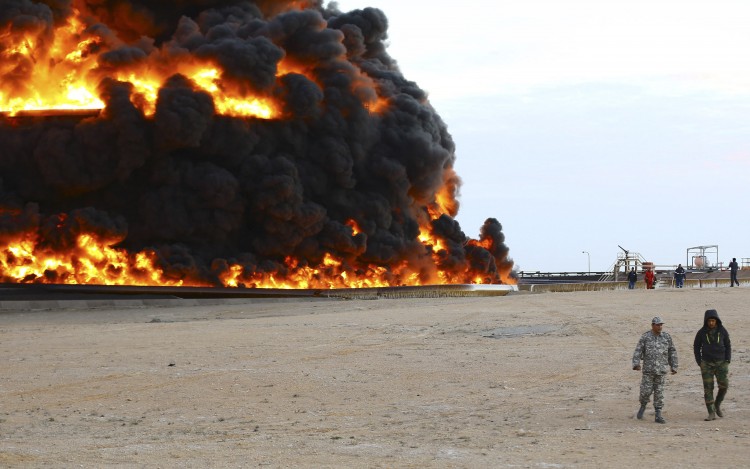 Firefighters try to put out the fire in an oil tank in Es Sider port December 26, 2014. A fire at an oil storage tank at Libya’s Es Sider port has spread to two more tanks after a rocket hit the country’s biggest terminal during clashes between forces allied to competing governments, officials said on Friday. REUTERS/Stringer (LIBYA – Tags: CIVIL UNREST POLITICS ENERGY) – RTR4JC8V

Amid the airstrikes, political declarations, and hostage taking, there is another, little-known war being waged; one whose outcome will surely determine the ultimate winners and losers in the battle for Libya. This war is being fought over the country’s single most important feature.

This is the war for oil.

According to the World Bank, government revenues from oil production account for nearly 95% of Libya’s national budget. This statistic becomes even more significant when paired with the fact that approximately 80% of Libyans are on the government payroll in some form or another. To say that the government of Libya is absolutely dependent on oil is an understatement. The entire nation subsists off its oil revenues.

The US Energy Information Agency (EIA) estimates that Libya has the largest oil reserves in Africa—at 47b barrels—also ranking it in the top ten globally. The country exports between 70-80% of its crude oil to Europe, with Italy being the primary destination.

Virtually all oil or gas produced in the country at some point comes under the purview of the Libyan National Oil Company (NOC), tasked—much like Egypt’s EGPC—with managing E&P activities as well as distribution and exports.

As oil is vital to the nation, the NOC is key to the country’s future. However, since civil war has erupted after the power vacuum left by the departure and subsequent killing of Muammar Qaddafi, it has been very difficult for the company to maintain its neutrality. Two rival governments have been set up—in the East and West—both seeking to control the NOC. More important than any strategic territorial gains, the winners of this economic battle will undoubtedly control the future of Libya.

Libya as a single country is a newcomer to the world stage—only declaring independence as a united country in 1951. For most of history the country has been divided into three distinct areas: Tripolitania in the northwest, Fezzan in the southwest, and Cyrenaica as the eastern half. These geographically disparate regions have traditionally been inhabited by tribes and controlled from cities separate from the rest of Libya. While Muammar Qaddafi ruled the country by enforcing brutally repressive policies and ruling with an iron fist, he was perhaps the only one capable of holding “Libya” together. Today the country is coming apart at the seams, and these old geographic boundaries are racing back into focus.

Oil producers were first attracted to Libya for the country’s vast, easy-to-extract-from deserts, sitting atop what were expected to be massive oil reserves. These expectations were quickly proved true. In 1956 the first wildcatter well was drilled in the Sirte basin, the nations largest. By the late 1950’s and early 1960’s, major oil companies were abundant; actively exploring most of the country under weak regulation.

Libya joined newly formed OPEC in 1962 in an attempt to increase national control over the price of oil, but under the Idrisi monarchy, firms were still un-regulated.

Muammar Qaddafi came to power in a bloodless coup in 1969, with a vision for a completely different system; a socialist Islamic state. In accordance with these goals, the Libyan government embarked on a campaign of nationalization. In 1970, the National Oil Company (NOC) of Libya was established and tasked with exploiting and regulating the country’s oil reserves (later expanded to include natural gas).

Qaddafi believed that standards for oil production had long been unfair; failing to adequately compensate nations such as his. According to researchers David Blundy and Andrew Lycett, Qaddafi advisor and deputy chairman Abdessalam Jalloud was instructed by the colonel to restrict the output of Libyan crude in order to force a price increase. The tactic was successful, and by 1970—a year later—nearly all members of OPEC had followed suit.

Qaddafi’s campaign of nationalization had immediate effects, as the newly formed NOC was limited by law to signing agreements with firms using the Production Sharing Agreement model (PSAs—also commonly employed in Egypt). This changed the oil production dynamic considerably, as PSAs require all exploration risks to be carried by the foreign oil company. It also changed existing contracts, as fields that had previously been exploited completely by IOCs were nationalized and joint ventures set up. By 1976, ConocoPhillips’s Umm Farud, BP’s Sarir, and Amoco’s Sahabir fields were all nationalized.

Under the leadership of Muammar Qaddafi, Libya had at times maintained very tenuous relations with its main oil importer—the West. This was especially true during the tenure of US President Ronald Reagan. Calling Qaddafi the “Mad Dog of the Middle East,” Reagan made confrontation with the Libyan leader a priority early in his presidency. An executive order banning Libyan oil imports to the United States was signed in early 1982.

Repeated conflicts between the two nations continued; as disagreements over territorial lines in the Gulf of Sidra boiled over into open conflict after accused Libyan involvement in killing American citizens.

In 1986, the US formally imposed economic sanctions on Libya, forcing all companies also doing business in the US to cease operations in Libya. Major oil companies including Marathon, Conoco, and Occidental all left important production fields that, in total, were generating over 250,000 b/d. Standstill agreements were reached, but the move deeply hurt US firms.

In 1988, a new bid round was held by Libya’s NOC and new agreements were signed with major non-US firms such as Shell, OMV, and Husky Oil. One of the main new features of these agreements was a clause guaranteeing certain levels of expenditure from the companies involved, a notable departure from earlier agreements.

From the late 80’s through the early 2000’s, Libya was under sanctions by the US and UN, and very little new investment in the oil sector was possible in the country. The industry stagnated. This all changed in 2006, when the last economic sanctions placed on the country were lifted by the US.

While Libya was producing 3.3m b/d at its peak in the 1970s, according to Middle East analyst Christopher Blanchard, the country was down to about 1.8m b/d in 2008. This marked decrease is due to two main reasons. First is the natural decline of oil fields, particularly in the shallow wells originally drilled in Libya. The second main reason is decades of economic sanctions, which have limited investment in the oil and gas sector generally, hitting its infrastructure particularly hard. In spite of this, in 2006 the Libyan government formed a Council for Oil and Gas Affairs to regulate the industry. Much like the shadow regulator currently in place to regulate gas activities in Egypt, this council aimed to give the NOC more independence in pursuing production activities, particularly through its joint ventures. This council also set a target for the nation to produce 2.3m b/d by 2013.

Considering the country only possesses 16 oil or gas wells per 10,000 km—according to Norway’s INSTOCK, similar countries have more than 50—there is considerable exploration yet to be made in Libya, especially with recent advances in EOR/IOR technology. However, no major agreements have been signed for the past ten years, and with the country currently embroiled in civil war, this is unlikely to change anytime soon.

After the bloody revolution of 2011, the NOC was quick to bounce back to near its pre-violence levels of production. In March of 2013, deals were announced by Germany’s Wintershall as well as a consortium of IOCs led by the NOC to bring online around 200,000 b/d. Italian giant Eni brought its own production up to 250,000 b/d, only slightly below its pre-war peak of 280,000 b/d.

BP and Repsol had staff in country that were working on finalizing agreements and ensuring that security of local staff was sufficient. However, Libya was on the cusp of violence yet again.

The governing body that emerged after the revolution was the General National Congress (GNC). Dominated by Islamists, the GNC was elected by popular vote and given a term of 18 months. Based in Tripoli, the GNC was tasked primarily with drafting a new constitution, something the body failed to do in a timely manner, having only just started on the constitution by the end of its agreed-upon term. As new electoral agreements had not been created, the GNC stayed in power for over two years.

In February of 2014, Khalifa Haftar—a well-known general from the Gaddafi era—declared that the current GNC was invalid. Haftar said that since the congress had extended its own mandate outside of a democratic vote, he would be forced to dissolve it. The GNC condemned the announcement as a thinly veiled coup attempt.

The next few months saw the beginning of a military campaign Haftar has branded “Operation Dignity.” The goal of the campaign is ostensibly to remove the Islamic Brotherhood from Libya, but critics have regularly stated that it is simply a grab for power in which the former general attacks potential political opponents—referring to them as “terrorists.”

In August of 2014 a new government was elected called the House of Representatives (HoR). This government was designed to replace the GNC. However, the Islamist factions within the GNC feared they would be marginalized in the new political body, and therefore refused to dissolve.

The present crisis is currently rooted in the fact that there are now two rival governments, one in Tripoli and one in the eastern city of Tobruk. Internationally, different nations have supported different sides, giving a global angle to the current crisis.

The NOC has a complex role in modern-day Libya. Being a government entity, the organization has been headquartered in Tripoli for its entire existence. However this currently presents problems, as most western states only recognize the eastern-based House of Representatives as Libya’s legitimate government.

Both governments took immediate action to try and wrest complete control of the only business that matters in Libya: Oil. The HoR acted by decreeing that the Oil and Gas Ministry of Libya was to be dissolved immediately, and that the NOC would be granted complete control over all oil and gas matters in the country. They also fired (at least in theory) the current head of the NOC in Tripoli and appointed a new head to be headquartered in Tobruk. For its part, the GNC in Tripoli also appointed their own NOC chairman, with his offices in Tripoli. The GNC also maintained that the Oil and Gas Ministry was still fully functioning and in charge of agreements in the country.

Oil is big business, and risk mitigation strategies are none-more apparent than for energy companies operating in Libya. Without clear delineation about which government is truly in charge of the sector, oil majors have mostly steered clear of signing new agreements with either one.

The truly complicating factor is that while the majority of oil-producing fields are in the east—under HoR control, all concession agreement terms route payment through the Libyan National Bank in Tripoli.

With their only revenues coming from oil, neither government has the ability to simply let the other take over the industry. Ironically, the resource supplying funds is the only resource being fought over.

With a rising jihadi threat and the ongoing war being waged, the future of Libya’s NOC is uncertain. As long as the country remains mired in civil war, significant expenditure by oil companies are unlikely; due diligence argues against such moves.

One thing is certain: as long as black liquid remains just below the surface, international firms will keep flocking back to Libya. The country may be a question mark for now, but as soon as violence ceases, it is set to be a goldmine.