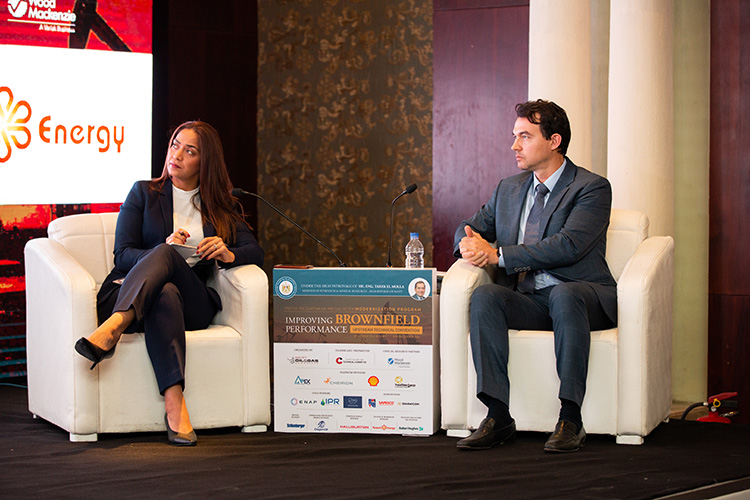 The first day of the convention was concluded by a technical workshop about the technologies and new scientific tools that create material value in brownfields along with some successful case studies.

Mohamed Gallab, Reservoir Engineer and Department Head at Khalda Petroleum Company (Apache), made a presentation about the use of modern production analysis, especially Rate Transient Analysis (RTA) in multi-layer stratigraphic reservoirs. Gallab started the presentation with an explanation of the challenging nature of a field with stratigraphic style. He stressed that it is very important for the project’s economics to have good estimation of the oil reserves in the Western Desert. Gallab clarified that “analytical approaches are primary reservoir engineering techniques for understanding reservoir characteristics which create additional value.”

Moving to the actual case study conducted using RTA, which is the discovery Well-1X, Gallab focused on the AEB-3A3 reservoir, which is a thin sandstone reservoir. The reservoir produced 1,000 barrels of oil per day (b/d) and a drained volume of half a million stock tank barrels. The analysis showed a deviation from the harmony line which is an indication of flux, an excellent match on reservoir productivity index and abundance of static pressure points post drilling Well-9, and Well-11. Analyzing the reserves of wells and 1.5 million barrel of oil (mmbbl) are the fruits of using RTA analysis. The presentation went through the benefits of using RTA like determining the reserves and being able to formulate a strategy to develop reservoirs. Gallab added that if analytical solutions like RTA and Pressure Transient Analysis (PTA) are combined together, they can provide good characterization for the reservoir and improve the quality of results.

From Concept to Execution

Ahmed Fouad, Subsurface Manager at Schlumberger, made a presentation about the integrated exploitation philosophy on behalf of Claudie Fonseca, APS IOR, EOR expert- Western Hemisphere at Schlumberger. Fouad said that the team in Latin America was able to “increase production by 25% in the fields,” and enhance the recovery of those fields. The project targeted at increasing the reserves, he added “if we are seeking sustainment, we need to ensure that we keep getting more reserves.”

Fouad tackled a case study from Ecuador in a field called Block 61 which consists of 14 fields. Before the study, the Original Oil In Place (OOIP) was 3.5 billion barrels and after the study, it increased to 5.3 billion barrels, Fouad stated. “The recovery factor was assumed to be 20%, but after applying the new technology, now we have only 12%,” Fouad clarified. The team integrated 14 fields in terms of study. Integration and collaboration between the models used were crucial to know the changes “in oil water contact and how this is impacted the volumetric in the block,” according to Fouad.

Fouad added that the “exploitation philosophy is to tackle the business problems that you have” and to try to develop a technology where you can make the injection without any connectivity, bringing new pipelines into the project.

The team started studying different driving forces in different reservoirs, taking into consideration the reservoir compartmentalization, stratigraphic nature and the wellbore conditions, in order to be able to deliver the Enhanced Oil Recovery (EOR) promise.

The team used analytical and numerical tools to study the field initial conditions and to weigh the possibility of using water injection to increase the recovery.

He explained that horizontal development was a key in recovering reservoirs along with water injection, which was the long plan for solving problems in some layers. “As a result we increased the production by 20,000 barrels,” Fouad stated.

The third presentation was given by Mahmoud Tolba, Petroleum Engineering General Manager at West Bakr Petroleum Company. Tolba discussed in his presentation how “the company doubled the production of West Bakr after four decades of production.” Tolba explained that the company’s integrated plan was set in 2016 and they have reached their goals of doubling the production and reducing the operating cost in 2018. Tolba illustrated that the plan depended on five pillars: unlocking oil potential, freeing water disposal constraints, freeing oil handling constraints, tracking and analyzing well failures, and selecting durable Artificial Lift Systems (ALS).

Tolba tackled the results of the plan by specifying the target handling capacity in the two main oil and water treating facilities; K and H. According to Tolba, “the company has doubled the handling capacity of K station and it reached up to 30,000 BPF,” and its past capacity was 15,000 BPF. In addition, the targeted capacity in 2020 is 45,000 BPF. Similarly, the handling capacity of H facility has increased from 7,500 BPF to 15,000 BPF and the targeted handling capacity in 2020 is 25,000 BPF. Moreover, the water disposal capacity has been upgraded as well. Regarding water disposal wells, Tolba mentioned that “instead of drilling a new exposal well, we have used the P&A wells and this saved a lot of money actually, more than 50%.” Tolba showed that impact of the inter-track software in identifying the root cause of failure and assisting in its analysis.  Tolba added that using Progressive Cavity Pump (PCP) has increased well production and reduced the actual cost per barrel from $8.9 in 2014 to $6.7 in 2019.

Tolba concluded by stating that the “West Bakr team has succeed in increasing the production by 30% in the Fisical Year (FY) 2018/19.”

The fourth presentation was carried out by Said Faramawy, Geology and Geophysics (G&G) Coordinator at Eni. The presentation tackled increasing production in brownfield in Northern and Western Deserts and in Baharyia reservoir. The wokshop was entitled How a New Fault Interpretation Led To Double Field Production.

The project started with analyzing the data of production in which Faramawy stated that, “the team found a mismatch between the OOIP has been calculated in last reservoir case study and cumulative production especially in lower Baharyia.” Faramawy clarified that this mismatch could be due to lack of allocation or underestimation of OOIP and the two reasons have been re-evaluated.

Faramawy explained how seismic re-interpretation and re-mapping of performed for Upper and Lower Baharyia added new wells and opened new oil areas. Faramawy added that the ordering of the drilling campaign is a key of the case’s success.  “The campaign was done in six months during 2018 ,and 2019 with eight infill wells that had been drilled with total rate of 2,500 barrels,” Faramawy confirmed. “The wells production varies form 130 [barrels of oil per day] bbl/d to 600 bbl/d,” which depends on the location of the wells, Faramawy explained. He added that the wells are located in Lower Baharia except for one well with low production that is located in Upper Baharia.

Faramawy concluded by highlighting the importance of detailed analysis and new fault interpretation that paved the way for increasing production in brownfields.

The last presentation was delivered by Mahmoud El Ghalid, Senior Reservoir Engineer at GUPCO. The presentation was about re-accessing and re-developing Hilal field in the Southern Gulf of Suez. After going through the historical background of the field, El Ghalid showed the field’s development phases which ended with securing the wells to keep the platform safe in 2007.  “The problem at that time was how to re-initiate the production from the platform and how to access the remaining reserves,” El Ghalid added.

The team depended on a re-development plan to decide which way they will choose to re-access the reserves of the field. The company used field structure and mapping, Petrophysical Parameters Analysis and Pressure, Volume, Temperature (PVT) data for correlating the fluid properties for the three productive zones of Hilal field.

Reassessing the volume of reserves in the field was essential to determine a way of re- accessing the field, so the benchmarking technique was used, El-Ghalid explained. “The benchmarking technique’s objective is mainly to give us which formation has the most value,” as El Ghalid clarified. It relies on a relationship between a term called static complexity score and the associated recovery factor of this score. The score was calculated for the productive zones of Hilal field; El-Ghalid illustrated in detail the score of each zone. After defining the field’s potential, “the team concluded that they have estimated 14.1 million barrel of oil that needs to be produced,” El Ghalid added.

According to El Ghalid, to produce this estimated number after collecting different data on different levels, the company needs to choose between repairing the platforms with a cost of $148 million or drilling new platforms with a cost of $185 million. El Ghalid concluded that the company has chosen to drill new platforms, although it is more expensive “due to structural integrity of the current existing wells that has impaired fatigue resulted by high deflections of conductors experienced over the last 10 years.”