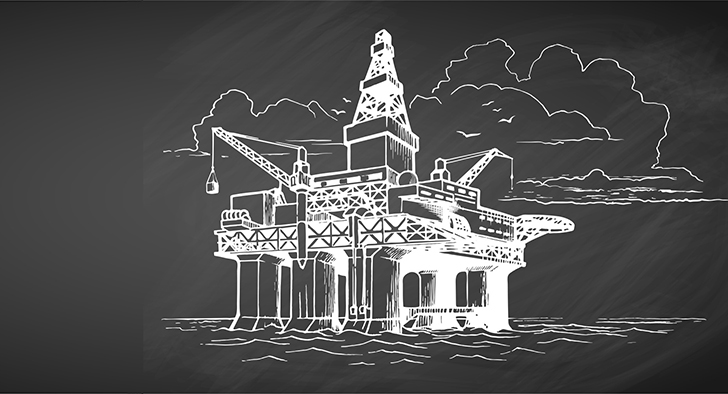 The entire oil and gas industry was shaken to the core, when oil prices began tumbling in mid 2014 after trading above $100 a barrel, but it was the upstream sector that bore the brunt of the dramatic price drop worst.

The profit margin of downstream companies was likely to remain unaffected; however, oil and gas companies that focus on exploration and production, that is, upstream companies, have faced significant financial distress. Adding insult to injury, production costs did not mirror the decline on the prices of crude oil.

The costs of drilling new wells have been declining all over the world, yet oil prices have been spiraling downwards faster than costs could have kept up with.

The increasing gap between costs and crude price refuted the popular argument that prices could not fall because production costs are high, according to an analysis published by VOX, the Center for Economic and Policy Research (CEPR) portal. Nonetheless, the report stated that upstream costs in fact follow oil prices, however, with a time lag. “A sustained 10% decrease in the price of oil leads to a decrease in upstream activity of about 4%, and in this way triggers a sustained 3% decrease in global upstream costs after a lag of one to two years,” the analysis calculated.

It is reasonable to expect that companies operating in the upstream sector would consistently work towards reducing high production costs to ensure profitability or, in some cases, a mere survival. Although the industry has been adjusting to the lower price environment by cutting production costs in the past few years, it is still expected that nearly “50% of oil production from future developments is [going to be] uneconomic at $60 per barrel, [because] the sustainable price of oil is above $70 per barrel in the longer term,” according to the energy consultancy, Wood Mackenzie, as quoted by BBC in February 2016.

Regardless of the price environment, in many countries, the cost of extracting oil is much higher than what crude is sold for. For instance, in the United Kingdom, the cost of producing a barrel of oil was $52.50 in November 2015, whereas it was sold for $42 per barrel at that time.

Many exploration & production (E&P) companies operating in high-cost countries were marking significant losses, which pushed them to adopt a range of cutbacks to ensure their survival.

The situation became more challenging with the price drop as debts of upstream companies were rising and bankruptcy posed a serious threat.

The net debt of US oil and gas E&Ps jumped from $81 billion in 2010 to $169 billion by the first half of 2015, the main reason for that being the sharp fall in crude oil prices, according to an analysis published by The Market Realist in late 2015.

Since the decline began in mid 2014 through to the end of 2015, at least 67 oil and gas companies in the US filed for bankruptcy, which was a 379% rise, according to a news report by CNN Money published in early 2016. Further, on a global scale, almost 35% of companies operating solely in the E&P sector were at “high risk” of going bankrupt in 2016, according to Deloitte’s data published by CNBC in February 2016.

Upstream companies that wanted to keep their heads above the water level did not have a pool of options in front of them. At the end, they had to either make adjustments or risk going out of business.

Cost reduction attempts could have been spotted throughout the sector in the past couple of years, most visibly through layoffs. The Market Realist wrote that around 250,000 jobs were lost as a result of the turbulence in energy markets. In 2015, Royal Dutch Shell ended up cutting 10,000 as its annual profits declined, according to a report published by BBC. Similarly, BP laid off 4,000 employees in 2015, and again this year announced a further 4,000 job cuts, all at the companies’ E&P divisions. Total and Exxon Mobil have also followed suit and thousands of employees have been laid off.

While the sector as a whole is facing one of the most profound challenges in the industry’s history, The Wall Street Journal wrote that the situation is far worse for smaller independent oil and gas producers.

In addition to reducing costs through layoffs, almost all major independent oil and gas companies have delayed their investment decisions on a number of large projects in 2015, according to Wood Mackenzie, as quoted by the VOX report. Investment in the upstream oil and gas sector fell by about 20% for the first time in seven years, according to the International Energy Agency (IEA).

The adopted strategy goes in line with the assessment that “the way upstream companies can attempt to rebound from the sharp decline in crude oil prices – or at least to make their financial reports look better – is by cutting back on new exploration. Over the long term, this cannot improve profitability, but it can make the situation look better,” Gail Tverberg, a Fellow of the Casualty Actuarial Society and a Member of the American Academy of Actuaries, told Egypt Oil&Gas.

“The easiest way to keep cash flow positive – or not too negative – is by cutting back on new exploration and production business. Thus, this part of the business is being cut back more than projects which are already under development,” Tverberg explained.

This inevitably let to the situation in which energy companies have been using up their petroleum reserves faster than they were able to replace them.

In 2015, seven biggest publicly traded Western energy companies, including Exxon Mobil and Royal Dutch Shell, were able to replace only 75% of the oil and natural gas they pumped, according to a Wall Street Journal analysis of the two companies’ data. Before the plunge in oil prices, dwindling reserves could have caused panic for investors and companies’ executives. But today, the situation is different, even though not necessarily more optimistic.

Many oil and gas companies have no choice but to cut spending wherever they can, and exploratory drilling and investments in new projects are sacrificed in favor of maintaining profits at their maximum.

As The Wall Street Journal reported, “when the house is burning you are not worrying if you need to paint the outside,” said Christopher Wheaton, a Fund Manager at Allianz Global Investors, which holds stocks in several of the largest oil companies including Shell, Total, and BP. As he added, “it is crisis management at the moment.”

Investments have shrunken E&P activities, but these operations are paradoxically exactly what the industry needs in order for oil prices to bounce back.

Oil markets thus remain in a predicament also due to the fact that even though some upstream companies are cutting costs and reducing production, global crude supply still outstrips demand. The explanation for this is that there are still many oil producers that are reluctant to reduce their production or shut down part of their businesses. This is an occurring phenomenon that has not been alleviated even if it brings lower profits. “Curtailed budgets have slowed investment which will reduce future volumes [of production], but there is little evidence of production shut-ins for economic reasons,” Robert Plummer, VP of Investment Research at Wood Mackenzie told Reuters in an interview.

According to a report Oil Prices: Production Shut-ins and the Cost Curve published by Wood Mackenzie in 2016, at the Brent oil price of $35 per barrel, companies have recorded losses equal to oil production levels of 3.4mb/d, which is an equivalent of about 3.5% of global oil production.

It may seem that upstream companies are shooting themselves in the foot by not cutting back production, but they do have their own rationale. Shutting down comes at a high cost as restarting could be more difficult and require even more financial resources than temporary lower profit businesses achieve. Furthermore, shutting down certain oil fields could permanently damage reservoirs. This explains why many companies opt for continuing with production, even if they will end up operating at a loss. As Robert Plummer explained, “given the cost of restarting production, many producers will continue to take the loss in the hope of a rebound in prices.”

This reluctance to halt production, however, further complicates the situation and delays the eagerly anticipated recovery of oil prices.

What the Future Holds

In such a volatile industry, it is very difficult to predict in which direction oil prices may move or what the future may bring. Although prices have recently bounced back to the $50 per barrel benchmark after hitting a low of $26.21 in early February 2016, it is still believed that it will take years for the price of oil to return to what was considered the standard over the last decade i.e. the $90 or $100 per barrel range, according to an article Oil Price Explained: Sings of a Modest Revival, published by The New York Times in May 2016.

It is important to note that, regardless of market fluctuations, the future of the upstream sector differs from one company to another. Major integrated companies will likely make it through the difficulties, probably unscathed, as a report Resilience in a Time of Volatility: Oil Prices and the Energy Industry published 2015 by the professional services firm, EY, previously known as Ernst & Young indicated.

Furthermore, new prices of oil can create an opportunity for the large players in the industry, an opportunity to pursue affordable acquisitions, and to strengthen their positions in the global market.

On the other hand, smaller independent companies with fewer resources to spare, especially those that are highly leveraged or insufficiently hedged, are more prone to face a struggle for survival; even more so if oil prices stay low for a long time. In this way, small companies may easily find themselves juggling bankruptcies.

In this alarming, yet still a viable scenario, larger companies, in search of a good bargain, may acquire their distressed assets at a lower price and initiative overtaking the remaining market shares.

The report on industry perspectives titled – 2015 Oil and Gas Trends – published by PwC’s Strategy& goes on to confirm that only if companies manage to consolidate their strong assets will they be able to survive and thrive in today’s challenging energy environment. Therefore, according to recommendations, companies need to cautiously evaluate their portfolios. Each field should be assessed to ensure it is a good fit for companies’ strengths, skill sets, and customer demographics.

Unlike before the sharp decline in oil prices, when companies enjoyed a period of high growth and rapid extension, in today’s global market, characterized by oversupply, companies need to redirect their main focus.

In addition to minimizing costs of operations, the companies may seek to maintain their investments at a rate that would ensure steady production, according to the PWC’s Strategy& analysis. It would be a grave mistake for E&P companies to solely focus on cost reduction, as, in the oil and gas industry, this may easily project a rather short-sighted strategy.