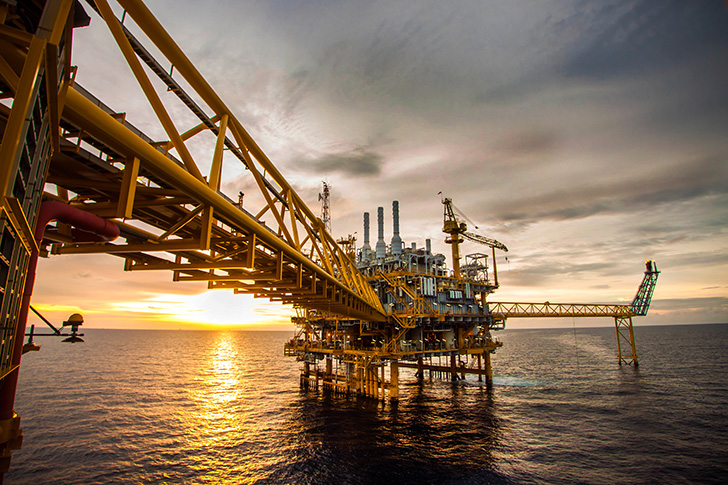 With an opportunity cost in international markets, Egyptian natural gas contains a price advantage, cleaner emissions than oil, and is more environment-friendly. Egyptian natural gas is also a domestic consumption substitute for petroleum products since that it is highly tradable. Moreover, it is considered predominantly a fuel for power generation and industrial plants in Egypt; hence its significance for the economic development of the country is unquestionable.

For gas, the situation differs from that of oil; gas exports require a specific infrastructure such as pipelines and liquefaction plants for LNG. Egypt’s natural gas export infrastructure consists of a pipeline and three LNG trains. For oil, refineries are needed, but if their domestic capacity is smaller than the size of the national market, a balance can be achieved by exporting crude and importing petroleum products. There are two LNG facilities in Egypt; one in Damietta with one train and the other LNG facility in Edku to the west of Damietta with two trains.

Offshore facilities play a very important role in strengthening the oil and gas sector and raising its productivity. Accordingly, offshore pipelines are considered one of the most important upstream gas infrastructure in Egypt as it supports the country’s role in shaping the oil and gas landscape in the MENA region.

Egypt used to be a vital natural gas exporter due to its transmission pipelines system along with the Liquefied Natural Gas (LNG) facilities situated on the coast of the Mediterranean Sea. This gas infrastructure has been extended and upgraded on a regular basis to serve the national plan of expanding gas utilization in the residential sector. However, the decline in oil production has coincided with a natural gas boom induced by  the significant discovery  of Zohr field, which is an offshore natural gas field located in the Egyptian sector of the Mediterranean Sea discovered by Italy’s Eni. In addition, the development of Zohr will primarily serve the Egyptian domestic gas market, making up for a rapid decline in gas production, which has left the country relying on imports as it increasingly struggles to meet domestic demand. The discovery will also strengthen a wider recovery in interest and investment that Egypt’s oil and gas sector has benefitted from over 2015.

In the same context, British Petroleum (BP) has recently announced a gas discovery as part of its North Damietta offshore concession in Egypt’s Nile Delta, which is the third such discovery in two years in the same block. “This latest discovery confirms our belief that the Nile Delta is a world-class basin,” BP, Chief Executive, Bob Dudley said in the company’s official press release. Commenting on BP’s discovery, BP North Africa Regional President, Hesham Mekawi, said “We are delighted to sustain our success in these shallow Pliocene targets. We believe development of Qattameya could help unlock the resources in other nearby discoveries with similar shallow low pressure characteristics.  This is part of our long-standing commitment to Egypt and to unlocking Egypt’s energy potential.”

On account of the recent discoveries by Eni and BP, Egypt’s natural gas production is expected to boost substantially over the coming few years. Consequently, there is an urgent need to develop the equipment and facilities, especially offshore pipelines for Zohr and other expected BP gas fields in order to meet any possible delays or barriers to the production phase on the short run, and successfully meet the goal of being an energy hub on the long run.

In a previously published article on Egypt Oil&Gas, Egypt’s Minister of Petroleum and Mineral Resources, Tarek El Molla stated in his speech at the October,2016 Forum “The Hub strategy relies heavily on the infrastructures in place such as that of Suez Canal, SUMED, LNG facilities, and pipelines”.

Moreover, Egypt is currently developing multiple infrastructure projects in Port Said with plans to rely on the existing LNG export facilities in Idku and Damietta for liquefaction, which have been sitting idle.

Critics mainly argue that exporting gas will deplete gas resources too quickly and constrain the use of gas domestically. The claim that reserves are large is, therefore, meant to support the export policy. Egypt stopped exporting gas since 2012 and began importing LNG in 2015 via two floating storage and regasification units (FSRU) launched at the country’s eastern shore in 2012 for the purpose of importing LNG. In 2016, Egypt has launched a tender to hire a third FSRU to LNG. The country has been forced to import gas from global markets to ease immediate supply shortfalls and the decision to purchase gas from Zohr and BP’s West Nile Delta at higher rates will weigh on already high trade and budget deficits. An uncertain financial outlook as well as the potential for a reduction in financing form Egypt’s oil exporting Gulf allies, could undermine the country’s ability to meet financial commitments to International Oil Companies (OCs).

It is worth noting that BG used to be the main LNG exporter in Egypt, purchasing the entire output from the two-train Idku LNG plant. However, the plant has been operating significantly below capacity since 2010 when more gas started to be diverted to the domestic market due to increase in local consumption and decreased exports. Egypt used to export its gas via two LNG terminals. The first one is Damietta terminal, which had an annual capacity of five million tons and became operational in 2004.  Around 80% of the terminal is owned by Union Fenosa Gas, which is a joint venture between Italy’s Eni and Spain´s Gas Natural, with the rest belonging to EGAS and EGPC. Union Fenosa Gas and BP have long-term contracts for purchasing its LNG.

The other LNG terminal is Idku terminal, which had an annual capacity of seven million tons and started operating in 2005. Idku is owned by BG (35.5%), Petronas (35.5%), GDF Suez (5%) and EGAS & EGPC (24%). The entire output from the train one is purchased by GDF Suez and that of the train two by BG. Due to lack of gas, the Damietta plant has been idle since 2012 and the output of the Idku facility has decreased steadily over the last few years.

Egypt barely has gas export infrastructure challenges as it already has LNG export infrastructure in Idku and Damietta, which is currently sitting idle. Putting this into use would allow gas to be exported from Zohr and other Egyptian fields not used in the home market. Furthermore, the main challenge facing Egypt’s natural gas exports is how fast can Zohr field become operational, and at what investment cost, and more importantly how exactly the revenues from the field will be distributed.

In addition to these concerns, LNG prices have been falling due to a variety of international factors. “First, Japan, which had become one of the world’s largest LNG consumers after its Fukushima nuclear disaster, began restarting its nuclear reactors, thereby reducing demand. Second, there is also increased supply capacity coming online around the world that is likely to put further pressure on prices. As prices become lower, the prospective returns from the new discovery would already be under pressure. Finally, with the Iranian nuclear deal being completed, Iran will be likely to increase investment in its LNG capabilities to become a larger regional gas producer” according to Adel Abdel Ghafar’s article for Brookings-Egypt’s new gas discovery: Opportunities and challenges.

The development of the domestic gas infrastructure in Egypt has always been through the investment and control mainly of the Egyptian Gas & Petroleum Corporation (EGPC) and, subsequently, the Egyptian Gas Holding company (EGAS). Liberalization of the domestic market and encouraging the private sector to participate became a must to overcome the current hardships. EGAS would better be concerned with setting policy, establishing price formulas and mechanisms that encourage private companies to invest, as well as controlling standards, procedures, and competency levels.

Furthermore, enhancing the governance of the gas sector is very important to reach sustainability. “The government is planning to carry out certain sectorial reforms and to eventually limit its role to simply regulating the sector, and eliminate the dual role currently played by some government bodies as both producer and regulator,” explained Karim Hegazy in his research for Energy Charter Secretariat Knowledge Centre-Egypt’s Energy Sector: Regional Cooperation Outlook and Prospects of Furthering Engagement with the Energy Charter.

In addition, technology transfer has always been an embedded characteristic of oil and gas upstream infrastructure development. However, the present circumstances are different in a sense that technology is being developed on a fast track and needs to be transferred in the same manner. New technologies are underway for almost all aspects of the sector, particularly the renewable energy and the LNG infrastructure both of which are very relevant to Egypt.

No one can deny that a number of policy decisions have led to the prominent rise in domestic gas consumption in Egypt. Although domestic gas prices were low, the government offered the upstream producers substantially higher prices in order to create the incentives necessary for upstream producers to develop existing reserves and explore for new gas reserves.

“However, while invigorating foreign investment in the gas sector, Egypt realizes that such an objective could not be achieved in one fell swoop. The low gas price causes a bias in favor of gas export projects while at the same time reduces investors’ interest in the upstream and downstream gas sector. This requires Egypt to revisit its gas allocation policy, especially if the government is trying to de-link investors’ interest from domestic gas prices,” according to Mr. Hegazy.

Egypt is planning to achieve self-sufficiency in natural gas by the end of 2018, which creates an urgent need to develop the natural gas upstream infrastructure and facilities to be able to get back on the LNG exporting track as soon as the domestic needs are fulfilled.

Gas trade in the Arab world has been known for exporting gas in the form of LNG to points in Asia, Europe, and North America. Inaugurated in July 2003, the Arab Gas Pipeline (AGP), which is a trans-regional gas export pipeline aims to link Egypt to Jordan and there are plans to extend it to Syria and Lebanon and ultimately to Turkey. The pipeline was built at a cost of approximately $1.2billion.

Accordingly, Egypt is considered as a major player in the regional gas trade, because theonly cross-border gas pipeline system in the Mashreq region is the AGP, which was conceived as an international gas infrastructure from Egypt to Turkey via Jordan and Syria, with the ultimate objective ofenabling Egyptian gas to reach the European markets.

Meanwhile, there are many economic and geopolitical challenges facing the AGP such as Turkey’s claims to become a regional hub and Israel becoming non-dependent on Egypt’s natural gas supply and reaching self-sufficiency in gas from its Tamar field, operated by Noble and Delek.

However, with challenges come opportunities and the Egyptian government should take advantage of these opportunities and restore the AGP to life to encourage and support inking more Arab bilateral and multilateral oil and gas agreements. The AGP members should also consider the importance of investing in upstream infrastructure renovation to establish a healthy environment for the oil and gas activities in the region. It is, therefore, unavoidable to set up a plan and long-term vision through which the pipeline’s situation would improve. Arab cooperation is needed at this critical point as Egypt is moving forward with the economic reform plan, which includes restructuring the energy sector along with oil and gas industry to overcome the current shortage.