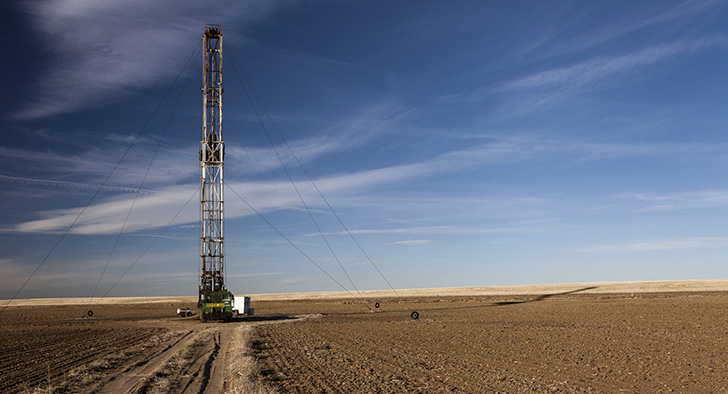 Global population has grown to an estimated 7.4 billion, with the majority of people scattered across Asia, followed in the distance by Africa. Accordingly, the world consumes millions of barrels of oil to fuel our daily lives and drive economic growth needed to sustain ever growing societies. In 2016, the International Energy Agency’s Oil Market Report estimated that worldwide demand of oil would reach an average of nearly 96mb/d. It was only natural that economies would look beyond the conventional for additional sources of hydrocarbons.

In order to meet energy demands, each country relies on sources of fuel that are available to them. Governments devise their strategic mix that represents planned energy allocations to various portions of fuel, sourced locally or imported from abroad. Although energy mixes differ from one nation to another, Planete Energies states that fossil fuels account for about 80% of the global energy mix. Additionally, National Geographic’s Energy Blog further attests that by 2021 the US’s energy mix will continue to rely on hydrocarbons, despite efforts to add cleaner renewable power to the fuel cocktail and dispose of coal plants. It is difficult to wean an economy off oil once development becomes more and more dependent on fossil fuels.

According to the Congressional Research Service report titled An Overview of Unconventional Oil and Natural Gas: Resources and Federal Actions,’ following 2010, the percentage of Shale Gas in the US’s production has been on par with that of Tight Oil, reaching over 40%. The report further stipulates that Shale Gas production will surpass that of Tight Oil between 2030 and 2035.

As Egypt embarks on an era of extensive economic development, the country’s dependency on petroleum is expected to deepen beyond the average production of 493,000b/d of crude oil, based on Trading Economics data for the first ten months of 2016. Although Eni’s giant Zohr field is expected to add an average about 2.7bcf/d of natural gas to Egypt’s output once production comes online in late 2017, the country should consider the possibility of augmenting the national energy mix with unconventional oils, and find ways to benefit from the experiences of other nations, which have entered into the frontiers of oil sands, hydraulic fracking, and other Enhanced Oil Recovery (EOR) techniques.

Governments pursue a balanced energy mix in order to maintain energy safety and security, economic efficiency in terms of cost, positive impacts on macro economics, and mitigate environmental effects. Countries take these elements into consideration, while also focusing on achieving favorable levels of self-sufficiency by using locally produced energy to cover domestic demand levels and ensuring that energy reaches various areas within a country by constructing power transmission networks and pipelines. In regard to energy security, it is vital for governments to sustain steady and diverse energy supply levels to ensure a continuous flow of fuel.

In recent years, the Egyptian government has been striving to bring balance to its energy market. The state has been exerting much effort to enhance oil and gas production, with a focus on conserving demand and regulating consumption by lifting fuel subsides and monitoring petrol sales through smart distribution methods. The majority of Egypt’s fuel is directed towards electricity generation. In early 2016, Egypt Oil&Gas informed that power plants consumed more than 75% of Egypt’s natural gas production. Following years of stagnation since 2011, the Egyptian government, led by President Abdel Fatah El Sisi, has been pushing for increased investments to drive the much needed economic growth. As a result, the country’s reliance on energy is expected to grow. Accordingly, Egypt has instated multi-tier reform programs to favorably shift the country’s energy situation.

In his Occasional Paper titled ‘Egypt’s Energy Sector: Regional Cooperation Outlook and Prospects of Furthering Engagement with the Energy Charter,’ Karim Hegazy stated that the Egyptian government resumed the implementation of its 2017 energy strategy to “revive the sector and bridge the gap between supply and demand over five years, backed up by issuing a new unified investment law.” Hegazy further explained that the key measures of this strategy were to address energy security concerns by boosting, diversifying, and improving energy efficiency, in addition to the sustainability of debt buildup and phasing out fuel subsidies, as well as the governance of a modernized oil and gas industry based on close collaboration and synergies between the public and private sectors.

In its efforts to diversify the country’s power sources, Egypt instated multiple renewable projects from both solar and wind. The Egyptian Electric Utility and Consumer Protection Regulatory Agency reported that the expected contribution of non-hydro renewable energy sources would reach just over 30% of Egypt’s installed power capacity by 2035. With the introduction of renewable sources of power and the much anticipated Dabaa nuclear plant, Egypt will liberate crucial supplies of mazut and natural gas for redirection towards manufacturing and industrial consumers. This comes as the government is encouraging international oil companies (IOCs) to inject more investments into upstream petroleum developments with the hopes of boosting local production. A reported titled ‘Impact of Energy Demand on Egypt’s Oil and Natural Gas Reserves’, issued by Egyptian-German Joint Committee on Renewable Energy, Energy Efficiency and Environmental Protection, estimates that Egypt’s oil output will reach 280,000b/d by 2030, due to diminishing production rates. Therefore, the country will need to import an additional 400,000b/d or 20 million tons of oil equivalent to satiate demand for refined oil products, with Egypt’s oil consumption projected at 22-45 million tons of oil equivalent.

Egypt is increasing its dependency on natural gas, with the promise of about 76tcf of reserves offshore the Mediterranean Sea. The Egyptian-German report estimated that gas production will reach 800bcf by 2030. However, increased gas production will not offset demand for petrol and benzene products. Moreover, as the government promotes the use of natural gas in various sectors, demand will consequently grow. As a result, Egypt should locate alternative sources of fuel.

Egypt’s Potential for the Unconventionals

Egypt has taken a proactive stance in seeking unconventional sources of fuel. In 2013, Egypt Oil&Gas informed that a round table discussed the potentials of unconventional oil and gas in the country. Petroleum Minister, Tarek El Molla, who headed the Egyptian General Petroleum Corporation (EGPC) at the time, stated that shale was “one of the most attractive investment opportunities”, as he highlighted the importance of unconventional oil in diversifying the country’s fuel supplies. Furthermore, in 2015, El Molla witnessed proceedings of the ‘Development of Unconventional Resources of Oil and Gas in Egypt’ seminar. During his opening speech, the minister stated that Egypt planned to start exploring for unconventional oil and gas “within the framework of the integrated strategy of the State to diversify its current energy mix in Egypt and the addition of new sources.” Egypt thus took a number of measures to encourage foreign investors into directing funds towards unconventional discoveries in the Western Desert, Upper Egypt, the Nile Delta, and the Gulf of Suez regions.

This came as Bloomberg reported in March 2016 that both US Apache Corporation and Dutch Royal Shell were planning to start producing unconventional oil in Egypt’s Western Desert by the end of June of that year. The companies were to drill the first unconventional gas well in a pilot project, with the addition of two more wells before approaching the government with a full development plan for horizontal drilling and fracking at the field. In Oxford Business Group’s report on ‘US shale industry a challenge for Egyptian oil producers’, Apache Egypt’s General Manager at the time, Thomas Maher, said: “While there is definite potential in unconventional oil and gas – [the Egyptian] government hopes to replicate the success of the US in the space – there is still a lot of conventional to be developed.” “That said, we hope to unlock the potential in the large Apollonia chalk tight reservoir in the Western Desert,” he added.

However, Egypt has many challenges to overcome before the country can leverage its unconventional reserves. A Cairo University statistical analysis on ‘Future of Petroleum Energy in Egypt – Challenges and Opportunities’ specified Data Management as the first step in Enhanced Oil Recovery (EOR) methodology of extracting unconventional oil, with the 2013 round table citing the need for a database as a recurring topic of interest.

Egypt must embark on extensive data collection, organizing, and storage from all operators drilling below the source rock. Furthermore, EGPC would need to consider altered contractual models for unconventional exploration, which bare increased risks than normal oil and gas discovered. Therefore, the government might need to reexamine production-sharing ratios to make unconventional upstream projects more appealing to investors. Undoubtedly, timely arrear payments for equity conventional oil will also encourage IOCs to shift some focus to unconventionals. Accordingly, alleviating subsidies and liberating the energy market will create pricing schemas based on supply and demand dynamics, thus allowing for preferable selling prices. The Egyptian government has already progressed in the previous steps under the Petroleum Ministry’s comprehensive strategy to modernize the industry. These elements, together with heightened governance and extra transparency, will attract more investments to Egypt’s novice unconventional oil and gas upstream segment. Moreover, Egypt has an opportunity to capitalize on lessons learned from other nations that have advanced into unconventionals, such as the US, Canada, Argentina, Mexico, and China.

By the beginning of the 2000s, the US decided to diversify away from its traditional investment locations in North Africa and in the countries of the Gulf Cooperation Council. Accordingly, the US governmental 2001 energy plan focused on the domestic development of unconventional oils by leveraging hydraulic fracking and horizontal drilling techniques developed in the late 1980s. Consequently, production from tight oil has grown from 600,000b/d in 2008 to 3.5mb/d in 2014. Along the path to the unconventional, the US operators have developed advanced extracting techniques, while addressing issues of unconventional production economies and environmental concerns. By partnering with US firms, such as Apache, Egypt has an opportunity to tap into the company’s knowledge in extracting unconventional oil and gas, and thus expediting the country’s learning curve in this arena.

Moreover, Egypt can build on the applicable experiences of other developing nations such as Chile, which started tight oil production in 2010 and also suffered from a lack of geological data as unconventional discoveries were overlooked and accordingly the country had not collected relevant data. To overcome this hurdle, Chile deployed a data collection campaign to resample older wells and promote drilling at newer pilot programs. In the 2013 roundtable, Enap Sipetrol’s General Manager, Lisandro Rojas, explained that Chile further suffered challenges with technology in terms of availability and costs. He cautioned that initial production costs for unconventional would be “very expensive.” As a result, he argued against using the US and Canada as an implementation model due to the difficulties in replicating infrastructure and technological environments. He recommended Argentina instead as a better fit. Additionally, India and China came out as preferable role models for contract schemas. Yet, Apache Egypt highlighted that Egypt can benefit from US’s experience in “recycling and reconditioning waste water and various other unconventional solutions” to mitigate water usage required for the fracking processes. Subsequently, the country can undertake proactive actions to efficiently address environmental concerns.

Although Egypt’s unconventional oil is still untapped, the country can benefit from these undiscovered potential as the government will continue to rely on hydrocarbons as an energy source for manufacturing and heavy industries. Accordingly, the country’s remaining oil and gas reserves, both conventional and unconventional could be used to transition the economy, driving macro-growth on human resources and renewable energy resources.