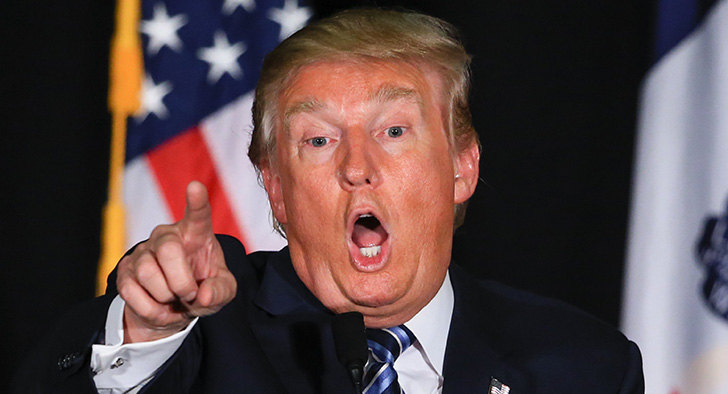 Iraq’s oil industry has been a central component to the welfare of its economy, occupying around 95% of the government’s total revenues. For years following the end of the US war on Iraq, the development of the oil sector in Iraq has been resurrecting amid conflicting national interests over energy resources. Most recently, with the inauguration of the new American President, Donald Trump, a new threat to Iraqi oil industry emerged. Trump’s energy ambitions in Iraq’s oil have become a subject matter for analyses, with increasing expectations of the grave consequences that his agenda may likely lead to.

Donald Trump’s local energy policy looks firmly-oriented towards growth and expansion in the part of the world that highly depends on the petroleum industry. Energy Analyst, Robert Rapier, wrote in a Forbes-published opinion column that Trump’s policies “will probably lead to incrementally higher oil, gas, and coal production than under a Clinton Administration.” However, his energy aspirations go beyond the North American borders, and signal to the Bush-like ambitions of taking Iraq’s oil.

When in fact, the United States has taken the September 11th attack as gateways for seizing oil resources in Baghdad, Trump has been publicly outspoken about his persistence to stick to this agenda. “I would take the oil” has long been Trump’s assertions when asked about his stance regarding the war on Iraq.

He has revealed this idea numerous times. “I told you very early on, if we’re going to leave, take the oil, because, right now, you know who has the oil,” said Trump in an interview with CNN on State of the Union, in October 2015. Similarly, Trump declared in his speech on foreign policy in Ohio in August 2016: “I have long said that we should have kept the oil in Iraq.” And even though Trump’s strategy towards getting into Iraq may seem coinciding with America’s ambitions in the early 2000s, his approach to this country is different from Bush-like “nation-building” aspirations. It is even more grave, blunt, and explicit.

The Guardian’s article – Trump’s Plan to Steal the Oil in Iraq, published in September 2016, explained that taking the Iraqi oil is an act of reimbursement in Trump’s viewpoint. Ironically, Trump says that he would have allocated the money from the sale of Iraqi oil for the medical care of the wounded American soldiers and for compensating the families of those killed in the war. In this regards, Trump made his most prominent statement during a televised military forum in New York in 2016, saying: “It used to be, ‘To the victor belong the spoils,” Trump said. “Now, there was no victor there, believe me. There was no victor. But I always said: Take the oil.”

The newly-elected President believes that ISIS phenomenon emerged following the gradual secession of American military troops, hence, Daesh exploited the political vacuum and the rooted sectarian strife in Iraq to grasp oil resources and hold control of some oil fields. Trump has recognized that oil production has been a revenue generator for ISIS, which at one point hit an amount of $2 million a day, according to Los Angeles Times article – Donald Trump Says the US Should Have Taken Iraq’s Oil. In essence, the US military launched several attacks on the ISIS-held oil wells, oil and gas separation plants, and tanker trucks. Yet, these efforts do not satisfy Trump’s greed for oil. In fact, he said in an interview with Meet the Press in August 2015: “ISIS is taking over a lot of the oil and certain areas of Iraq. And I said you take away their wealth, that you go and knock the hell out of the oil, take back the oil. We take over the oil, which we should have done in the first place.” This implies that Trump’s motives to eradicate ISIS basis in Iraq is driven by the American desire for oil.

As Trump has repeatedly endorsed the capture of Iraq’s oil fields, he further appeared to be scared of Iran’s rising oil status in the international market. The Islamic Republic, who is the third top oil producer in the world, has showcased a novel approach towards the industry. Therefore, Trump, who expressed a desire to re-impose oil sanctions on Iran, has been afraid of the Islamic Republic’s increasing advancement in oil after the lifting of international sanctions, which may prompt his administration to exploit the weak Iraqi government and control the oil fields there. In this sense, Trump told Wall Street Journal in an interview when asked if he would keep the US involved in Iraq: “You heard me; I would take the oil,” Trump insisted. “I would not leave Iraq and let Iran take the oil,” as he expressed his rationale.

Yet Trump’s plan on seizing Iraq’s crude oil is both insensible and withholds unconvincing arguments. Let alone that the mere idea of capturing oil fields in Iraq is greedy, the “take the oil” narrative holds within itself gross consequences in every single angle and involves a supertanker-size set of problems that would eventually lead to a war crime.

Starting with the “right of reimbursement” premise, it emphasizes that conquered countries should have their resources taken. The idea of the US claiming a reimbursement following an occupation of Iraq, when in fact the US itself has been the conqueror not the conquered, qualifies as an irrational and barbaric. Top Defense Official for George W. Bush, Douglas J. Feith, said according to Los Angeles Time report: “It basically aligns him [Trump] with the views of Stalin after World War II.” He added: “The Soviets after World War II went into Germany and dismantled every piece of equipment that they could find and stripped the country down.”  That said, leaving Iraq devoid of its prime source of revenue, will create hostility, instability, and more warfare. As for the fear of Iran’s desire to seize the oil, there’s no clear evidence that it is planning to capture Iraq’s oil fields. And even if the Islamic Republic has a hidden energy agenda for stealing the oil, these plans are not yet materialized, neither are they declared in any Iranian rhetoric. This makes capturing Iraq’s oil field by the US for fear that Iran “may or may not” take it apparently irrational.

In the meantime, Iraq enjoys full political independence, which gives it the full elements of sovereignty over its territory, thus having the rights to resources possession. If what Trump is advocating would be questioned on its legality, then the answer would be direct. The “take the oil” plan is a clear violation of the international law and the Geneva Convention, which explicitly bans seizing a property from an adversary. Article 147 of the 1949 Geneva Convention IV enunciates that the “extensive destruction and appropriation of property, not justified by military necessity and carried out unlawfully and wantonly” are grave breaches. In this sense, Director of Texas Tech University’s Center for Military Law & Policy, Richard D. Rosen, said that Trump’s idea “appears to constitute aggression of the type condemned by the United Nations’ resolution in 1974.” The resolution states that “any military occupation, however temporary, resulting from such invasion or attack, or any annexation by the use of force of the territory of another State or part thereof” qualifies as an “act of aggression.” This means that Trump’s plan is illegal and deemed stealth; with no substantiated claim for reimbursement for any losses he mentioned whatsoever.

Not only would stealing Iraqi oil resources breach the international law, it extends to diplomatic losses for the American government as well. The historical American rhetoric of promoting respect for states’ sovereignty has been an element the US relies on when it gets involved in conflict resolution cases. By defying the international law, the American government would have made an act of hypocrisy among the UN states, which would incur significant risks to the American diplomatic status. In essence, this distortion of the American reputation in the international community will lobby opposition against this plan – a plan that is unlikely to be endorsed by many congress democrats. Military Historian at Cameron University, Lance Jane, emphasized this point according to Politifact’s report – Should the U.S. Have Kept Iraq’s Oil, as Donald Trump Argues?, published in September 2016, stating: “Are we the good guys or not? Because if we are and if we want to convince the world we are, then we can’t go around invading countries and stealing their oil. The long-term damage to our reputation would be irrevocable.”

Put aside all legal and ethical arguments, going into Iraq would lead to massive military operation, which, in turn, would require a large number of army men and troops. The 2003 war on Iraq operated with around 200,000 troops, and “it didn’t work,” according to Washington Post’s citation of Andrew Bacevich, a retired Colonel and Professor of History and International relations at Boston University. Taking all the oil in a country as rich as Iraq would mean an explicitly declared occupation. In essence, Bacevich argued: “What would effective occupation actually require? A minimum of a half-million troops, perhaps more.” This further emphasizes the implausibility of this idea, because if Trump presumably would have the troops stay until the oil runs out, this would require an occupation that would run for decades. The total cost? It may be even higher than the revenues from the oil captured.

Beyond the huge finances America would need to insert in this case, the troops would actually be coming under a constant threat of attacks from ISIS groups and Iraqi opposition forces.  From one side, securing oil fields to make sure that ISIS does not impose control over them entails huge number of troops who must be highly equipped to fight a group as organized and as powerful as ISIS. From the other side, troops tasked with taking the oil would ignite violence among all groups in this territory. Be it ISIS, Iraqis, or the Kurds, the US military operations will be the center point of conflict for all forces in Iraq, who will likely leave behind any internal strife and direct the focus on eradicating the US troops. In this way, there would be no practical way for the American military to either seize the oil fields, or fight Iraqi and ISIS insurgents, or secure pipelines for exports. Even worse, taking the oil would not benefit the US, it would eventually lead to a war crime and grave losses for all parties involved.

Last, the rough geographic nature of the location of the oil fields can hinder different attempts of capturing oil. According to the Guardian’s article, most of Iraqi oil fields are located in arid Middle Eastern deserts far away from the major population centers, a fact that makes it hard for the US to maintain military bases at these oil fields, as argued by experts. This makes the idea itself both impractical and daunting.

That said, the Trumpist strategy of taking the oil in Iraq presents severe consequences to both the American government and the Gulf country. Undertaking his plan will require decades of occupation, and the risk of involving his country in a never ending conflict with ISIS militants, Iraqis, and Kurds. Apparently, Trump’s incentives show an American greed for the oil and prove that his plan is illegal, unfeasible, and undesirable.