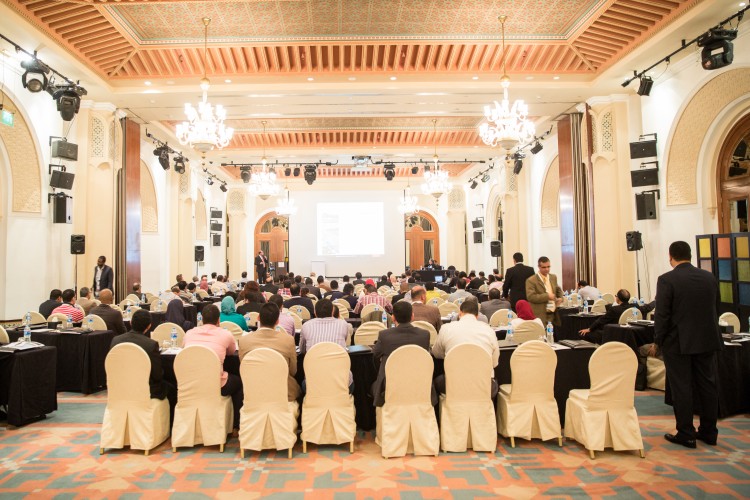 The idea behind Egypt Oil & Gas’s Production Optimization Convention was to help the industry enhance its effectiveness. In support of this, the convention activities began with a full day dedicated to training sessions, designed to offer practical applications for production optimization.

The core focus of the day revolved around artificial lift, going from an overview on the four forms of lift currently employed in Egypt to an in depth explanation of the optimizing production using each type of lift.

The events of the day began with an introductory session on optimization in the oil industry in Egypt, presented by Mike Mason, Regional Operations Manager of Apache. The session began with a brief comparison between artificial lifting statistics in Egypt and other countries around the world; where it was pointed out that 94% of all wells worldwide are artificially lifted, while Egypt followed the trend with 92% of its wells utilizing artificial lift systems, 53% of which rely on Sucker Rod Pumps (SRP).

The sessions then moved to a more technical focus, addressing the use of well inflow performance in well design, presented by Mohamed Ghareeb, Managing Director of WPS in Egypt and Tunisia, GE Oil & Gas. He began the session discussing the inflow performance relationship (IPR), which refers to the behavior of the well’s bottom hole flowing pressure and the production rate. Ghareeb stressed that the point being discussed was not the mere construction of the IPR, but rather its important role in the system design and troubleshooting.

When asked to give attendees one piece of advice, Ghareeb answered, “Make sure that the equipment design is a suitable match for well productivity, it is important not to oversize one over the other.”

Another session focused on discussing Electrical Submersible Pumps (ESP) and Gas Lift, presented by Essam Ginawi, Quality Operations Support Manager, Schlumberger. The session began with a brief about the components of ESPs and their functions. The session then progressed to discuss the performance of ESPs at different flow rates. Following this, ESP pump design challenges were addressed. “During the design process, it is vital to pay attention to every single component of the ESP string of the gas lift in the selection process. If the design phase is well carried out, the optimization phase is then done easily,” explains Ginawi. Before going into gas lifts, Ginawi presented a summary of ESPs advantages and disadvantages.

Shifting to gas lift, Ginawi began by presenting an overview. The term gas lift refers to the process of lifting fluids from a well by injecting gas to move resources to the surface. The application of each of the two methods of gas lifting, Continuous Flow and Intermittent, were discussed, followed by an overview of different gas lift tools, such as monitoring gauges, water flood valves, kickover tools, dummy valves, and chemical injection valves, just to name a few. The session was concluded by a brief about the advantages and disadvantages of gas lift.

The Fundamentals of Progressive Cavity Pump (PCP) Systems was on the agenda next, presented by Fadel Dahab, Product Line Manager for Weatherford. The session began with a brief history, highlighting its development in the 1920’s and its progress throughout the years; after which Dahab presented a detailed explanation of PCPs, covering its surface and downhole equipment. The session then detailed how the pump operates, going into its wide range of application in heavy and medium oil. “Whenever the situation allows the usage of PCP lifts, please use it, as it is the most efficient,” advised Dahab. The presentation was then concluded with common concerns about the usage of PCPs and their solutions.

The second half of the fourth session was presented by Brian Collins, Regional RRL Product Line Manager, Weatherford. The topic covered Rod Pumping Systems, and the session began with a brief about the pump, its surface and down hole components. Collins followed by discussing the merits of the pump. Some of the merits pointed out revolved around its flexibility, ability to withstand high temperatures, operate in depths up to 4.8 thousand meters, handle most fluid types and ability to provide good economic value. “Rod lifts can be widely displaced across most applications, and should be considered during the designing phase. Of course other forms of lifts should be utilized if they outweigh the advantages of rod lifts in a specific case; however, it is important to note that rod lift systems can be used from the beginning of the well to the end of the lifespan of the well, offering a wide range of diversity,” explained Collins.

The session then progressed to the typical range of applications and challenges, before moving onto new technologies, such as continuous sucker rods and ultra-long pumping unit; each of which was covered from different angles. The session was then concluded with a brief about the need to use equalization ports.

During the day, Egypt Oil & Gas had the chance to ask Mike Mason a few questions, beginning with whether there is anything about how business is done in Egypt that is affecting optimization in the oil industry. “Increasing oil production is good for everybody. It is good for the oil company, it is good for the industry and it is good for Egypt. Sometimes we think we can hold oil production back for years later, but it doesn’t really work like that,” answered Mason.

Commenting on how to boost production in Egypt, Mason said “All players in the industry need to pump their wells off. Additionally, we need to be very careful with how we treat the equipment and how we install the equipment, and when failures occurs, we need to understand what the failure was for, and why it happened, in order to prevent it.”

The fifth session of the day was about production optimization using ESPs and gas lift; and was presented by Samy Ibrahim, Artificial Lift Sales Manager for Schlumberger. The session began by explaining the process of optimization in artificial lifting systems, beginning with reservoir and production optimization, followed by surveillance, and finally the different stages of handling data; including how to obtain the most value from it.

The following session presented by Chetan Bhavsar, Application Engineer for ALS, Weatherford Oman, was titled Production Optimization for ALS—RRL and PCP. The session began by covering different aspects of production optimization, such as the process of managing the production decline curve of assets to maximize profits over time, maximizing oil production over the life of a well, and reducing downtime, among others.

Ibrahim then moved to discuss Reciprocating Rod Pump (RRP) optimization, beginning with its range of application, covering rod pump operations and general issues. Optimization for Progressive Cavity Pumps (PCPs) was covered next, focusing mainly on well performance and the correct methodologies to employ.

Optimization through Reliability was the title of a session presented by Mohamed Abbas, Production Manager, TransGlobe Energy. The session revolved around discussing different aspects that lead to optimization; beginning with PCP Elastomer selection, followed by software design, PCP installation, start-up and operating practices, technical support, and finally, the human element.

Mohamed Ghareeb, Managing Director of WPS in Egypt and Tunisia for GE Oil & Gas, presented the final session of the day. The focus of the session was on a Beam Pumping System design, beginning with an overview of modern beam pumping systems and followed by the elements that need to be considered when designing a sucker rod pumping well. Ghareeb then discussed the common causes of pump displacement, such as slippage, fluid shrinking, and the possibility of crude foaming in the pump.

Design principles were discussed next, followed by the factors hampering efficiency. The session was concluded with a brief on improving rod life through correct handling. According to Ghareeb, a large percentage of premature system failures can be attributed to improper care, handling, and installation of the surface and subsurface components.

A significant amount of information was shared, marking a promising launch to the four day event.