Total E&P Egypte: The Start Of A New Journey 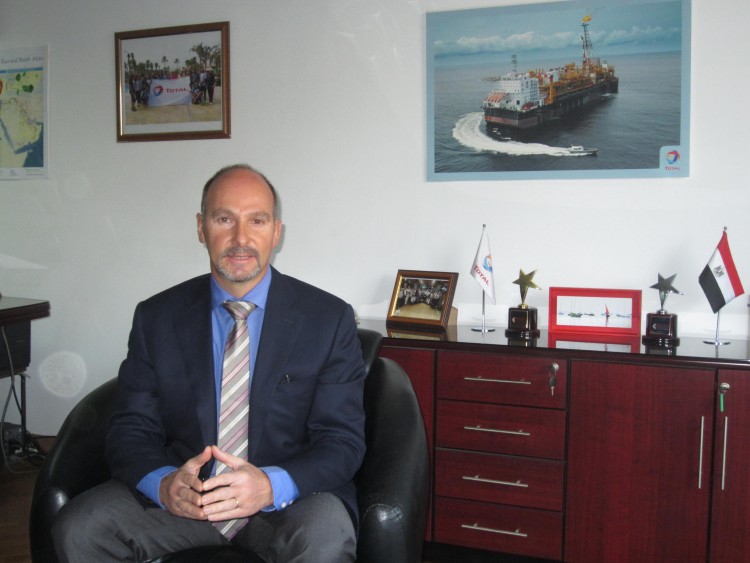 Would you tell us a bit about yourself?

My background is in chemical and petroleum engineering. I started working twenty years ago in Gabon, supervising offshore production, and since then have been working exclusively in the exploration & production (E&P) industry. After a few different assignments I obtained my MBA and joined Total thirteen years ago, working on business related matters across the Africa and the Middle East. My assignments have taken me all over the world, including the UK, Congo, Gabon, Iran, the UAE, and Qatar. Before accepting this assignment as Managing Director of Total E&P Egypt, I served as Director of Business Development at Total E&P Congo.

Total has recently merged its North Africa and Middle East divisions. What is the strategy behind the restructuring?

The first reason for merging our North Africa and Middle East divisions is that our Africa division of Total had become too big. We have a major presence in the Gulf of Guinea, Nigeria, Angola, Congo, and Gabon. Our East African presence has also grown recently, creating a large number of affiliates to supervise. At the same time of the merger, our Middle East division had fewer affiliates with many non-operating assets. It made better management sense to rebalance the portfolio of affiliates between the two divisions.

A Middle East/North Africa (MENA) division became a natural choice; With Arabic as a common language and many intercultural relationships, the region is already tied together

Egypt is the corner stone of the MENA region, both by way of geography and its population of 90 million. While Egypt faces many domestic consumption challenges, it is also a large producer of oil and natural gas. It remains a critical player in the regional energy market and this new MENA designation has enabled us to give more visibility to Egypt in the overall portfolio of Total.

What is the extent of Total´s (E&P) Egypte operations?

Total and ELF were originally in Egypt during the 1980s when they discovered some quantities of natural gas. However, at the time there was little demand for gas and in the early 1990s, Total E&P Egypte halted its activities. In 2010, Total E&P won an EGAS exploration bid round and the company restarted its operations in the country. We won the East El Burullus offshore block in 2010 and set up a new E&P affiliate to supervise all associated exploration activities. We have been busy the last four years conducting a large 3D seismic survey and subsequently drilling a well late in 2013. Unfortunately this well was not successful; we did not find gas, and after a thorough review of the project’s potential, it was decided to relinquish the block last August. We also participated in the EGAS bid round at the end of 2013 and got the North El Mahala onshore block, where we plan to resume exploration activities. We have just signed the concession agreement for this block on January 22nd, 2015, which allows us to keep our activity level up.

Is Total planning to participate in the upcoming bid round(s)?

Total is keen to expand its portfolio in Egypt and we are thoroughly analyzing each new bidding round. We are currently looking at Ganope’s bid round but it is too early to say if we will participate. We also believe that EGAS will launch another bid round soon, which we will definitely look into.

What is your opinion on the Egyptian petroleum authority’s practice of pricing data packages for concessions?

Selling data packages is a bit unusual; and 3D packages of millions of (US) dollars are very expensive for blocks that sometimes remain highly risky. There is an option to access the seismic data for about 10% of the price and, similar to many other companies, this is what we elected to do last bidding round.

Making data available in order to attract more companies to explore and develop oil and gas is where Egypt would benefit the most. Everything should be done to make sure that data is accessible to the largest number of companies possible. This ensures more bidders and more competition.

The current price for Brent crude is just under $50, how is that affecting Total´s operations?

As far as Egypt is concerned, we have remained reasonably unaffected because we currently have limited activity. The problem is really worldwide. Total is reviewing its entire portfolio to reassess its investments across the world. Total had already launched a program to reduce spending before oil prices collapsed. Our former chairman voiced very early on that the cost environment of the E&P world, where billions of US dollars had become the norm, was no longer sustainable.

If prices continue to drop after the 2nd quarter, do you expect to see an impact?

I believe so. In Egypt, I see difficulties in attracting the interest of Total and other IOCs to deep-water blocks, which require heavy investment. If oil prices stay at current levels, such spending will be pushed back many years.

I think that there is currently no hurry to launch a new exploration bidding round. Exploration is definitely the first area where companies can slow down. If operation on a new development is already decided on, you don’t have much choice but to continue. On the other hand, with exploration you can always say, “I will wait for a better environment before making the decision”.

Egypt needs to attract and stimulate new investment after three years of turmoil. Obviously it wants to move faster but the current environment is not really favorable.

What are some of the obstacles Total has been facing in its operations during your time here?

I have only observed exploration activities so my feedback is limited. However, I can say the administrative supervision of cost by our authorities is less than optimal; not necessarily resulting in the best available technology. Alternatively, if you try to speed the process up and use what you believe is a better solution, then you run the risk of not seeing it considered as a valid expense. We have extensively discussed the issue with EGAS and I believe there is a shared understanding of the improvements necessary, but implementing changes in a large organization is never easy.

Can you give us an overview of your investment and exploration plans?

We are now moving to onshore projects on the Nile Delta, where drilling is less costly and a potential discovery could be moved into production phase much quicker. Nonetheless, we are still bringing the best of our expertise to this area and are targeting deeper and more difficult prospects than what has previously been done in the region.

We believe Total´s added value is in the exploration of deeper prospects. These are more difficult to drill in because of high-pressure systems, and they require advanced technology. We have been discussing it with EGAS and they are keen to see major IOCs show interest in these advanced onshore prospects during the bidding rounds.

In your opinion, how can the Egyptian petroleum authorities better facilitate the process for IOCs?

Today the key issue preventing more interest from IOCs in the Egyptian fields is the gas price. We need to see examples of higher gas prices given to at least one local operator being transparently advertised by Egyptian authorities. Such precedent would really help us show our headquarters that the (currently too low) price levels are changing. In exploration, companies are taking huge risks, sometimes spending hundreds of millions of US dollars on dry wells; they can only justify these risks if they can firmly expect profitable projects in case of discovery. Today the policy says: “Come invest, and if you find something we will discuss about what can be done.” This does not encourage foreign investors at all.

This is why we also need clear and specific terms for areas requesting specific technology. The agreement for shale gas development advertised by EGPC last December was a good example of this, and we need others, to explore and develop the HP reservoir for instance.

The time of easy oil and gas in Egypt is over, what is left is going to be a lot more challenging to develop and the fiscal and contractual terms need to evolve.

Do you see Egypt increasing its oil or gas output in the coming years?

Oil and gas are very long-term projects, and there has been a lack of investment over the last three years. Even if we agree on new investments right now, it is going to take few years before we see their impact. As current gas production is already facing a significant decline, we are unlikely to see strong improvement for the next 2-3 years. By 2017 we may see more significant growth.

What is the potential of Egypt’s offshore blocks (e.g. Mediterranean deep-water and ultra deep-water)?

When I look at the portfolio for the Mediterranean off Egypt, I believe there is around 13 Tcf of gas present in various reservoirs already discovered by different operators. To give perspective, that is about the same size as the biggest recent Eastern Mediterranean discovery – the Leviathan field in Israel. Obviously, it is more difficult to develop [these reserves] because they are made up of scattered reservoirs ––some of which are high-pressure–– but the potential remains very significant.

I do not think the most critical issue for Egypt right now is finding new discoveries; more important is the development of reserves already discovered. This is why the gas price comes back as a key issue. As I explained, it is essential to ensure the gas price is attractive enough for companies that have already made discoveries to develop them. If they are able to develop those reserves, they will keep looking for additional resources in the area.

If you look at the way the North Sea has been developed, not everything was discovered in one go. When you have development and infrastructure, companies can more easily develop faster and it becomes more profitable. They will also be attracted to carry out exploration nearby, and at some point someone will make a large, additional discovery.

Why is North Africa’s contribution to Total’s African production standing at nearly 4% only?

It is true that so far we have not been as successful in North Africa as places like the Gulf of Guinea for instance. Looking at our North Africa portfolio, Mauritania is still very much an exploration country. In Algeria, we have limited assets, with some still under development. Libya’s production, which was quite important for us, is currently halted as a result of the war. Lastly in Egypt, in the 1980’s as well as more recently, we have not made any significant discoveries.

Our new block gives us an opportunity to maintain our E&P presence in Egypt. This continuity is important because it takes a long time to really have a good understanding of the country’s mining acreage, to build up knowledge of its geology and to get a real grasp of opportunities when they arise.

We have confidence that after a few turbulent years, Egypt’s future will offer promising challenges for companies with the right capabilities.