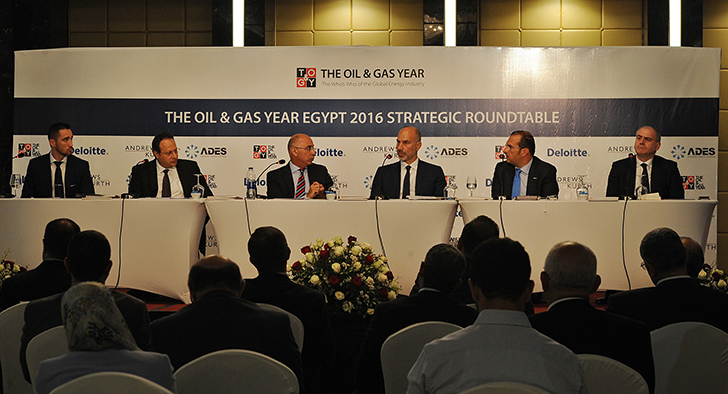 This fully interactive event which took place in the Royal Maxime Palace Kempinski, in New Cairo, attracted gas industry leaders and top delegates of major energy companies in Egypt to discuss the opportunities for the country, and the challenges ahead for Egypt to eventually become a natural gas hub.

In the greeting speech, Tamer Ismail, Country Editor of The Oil & Gas Year Egypt 2016 (TOGY) thanked the distinguished speakers, the sponsors of the event – Advance Energy Systems (ADES), Deloitte, and Andrews Kurth Law Firm. He also thanked their partners’ at TOGY – American Chamber of Commerce and General Authority for Investment, and the media partners – Egypt Oil&Gas, and Daily News Egypt.

Moderator Eng. Khaled Abu Bakr, Chairman of Taqa Arabia and Chairman of Egyptian Gas Association (EGA) stressed recent “fantastic reforms and modernization” of the energy sector in Egypt. He noted, among other aspects that the country is closing the gap on power generation, and enhancing the power efficiency. “Since 2013, with the democratic process that has been put in place, we all have seen how serious the government is in doing the reforms on energy,” he stated.

Further, he talked about “the remarkable efforts that have been done during the last two and a half years,” and cited the ongoing liberalization process in the gas industry, and the construction of infrastructures. Eng. Abu Bakr concluded his introductory speech saying: “It is the right time for all of us to be involved and all of us to stand together; government, private sector, think tanks, and public opinion.”

Eng. Khaled Abu Bakr went straight on to discuss one of the most concerning issues in the industry. After commenting that in 2014 there were some adjustments on the concession agreements, he asked how to improve the terms and conditions to encourage more investments, and how to ease the process for foreign partners.

“With the market liberalization we are going in the right direction,” Maurizio Coratella, Edison Vice President of Operations for Egypt and the Middle East, said. He was confident in stating that Egypt has a huge potential, however, added that it is necessary “to establish the right balance between the government and investors.” As for Edison, he mentioned their wish to have more flexibility in the agreements in order to make the current position of the contractor more fluid to allow investments. Also, he asked for free market to have access to customers that eventually would pay in dollars, and in this way the company would be able to invest more in the upstream.

In his opinion, “the potential is there,” especially after the finding of Zohr, therefore, it is now a matter of encountering a fine equilibrium between the government and investors.

The effects of taxes on the Egyptian oil and gas sector dominated in the roundtable debate when Wafik Hanna, Partner and Energy Resources Leader at Deloitte, addressed possible measures that could lead to a sustainable policy on taxation. The expert on Legal, Finance & Consulting explained how taxes changed after the revolution in 2011 and how they impacted individuals and companies investing in subsidiaries, and how the branches are paying to their home companies. He stated that there has been “a reduction of corporate tax rate from 25% to 22.5% in addition to an abolishment of a surtax of 5%.” The adopted tax reforms aim to incentivize IOCs to boost their exploration and production activity in Egypt.

More specifically in the oil and gas sector, he said that the main investors’ problem is the lack of a stable tax scheme. “The investors are looking for an environment where the tax law remains unchanged, as they are coming to invest, they have money and plans for a couple of years, and they are calculating the interest based on fix rates so they want to see that the return of their investment will be achieve,” added Hanna. In his opinion, although in Egypt the taxes are lower than in other European countries, stability of the tax structure is a key point.

The discussion continued exploring the ways to enhance Egypt’s oil and gas sectors in order to cope with the modernization and liberalization. Hugh Fraser, Partner at the Law Firm Andrews Kurth, firstly marked the importance of conducted steps, and later stated that what is still missing is to fast track the concession process. In his opinion, in order to fully realize the benefits of Egypt’s natural gas market liberalization reforms, it is important to have “a well-balanced legal regime that ensures benefits for all stakeholders, including regulators, operators, and consumers.”

Searching for ways in which to optimize EGPC’s services and deliver the best results in the oil and gas sector, Mohamed Farouk, CEO of Advanced Energy Systems (ADES), said that Egypt is facing a tough time amid the lack of foreign currency in the market. However, he stressed the importance of Zohr gas field describing it as a good opportunity to increase Egypt’s share in the international market and achieve sustainability.

Farouk sees that Egypt has to be a productive and a competitive member in the oil and gas sector especially within the period of low oil prices. He said that Egypt has been giving a good example in the sector since fifty years and encouraged the decision makers in the sector to replace payments in foreign currency with the Egyptian pounds, which will eventually help the local companies to flourish and grow. He added that sponsoring small local companies will bring the best service out of it. “The more local content we have in our services accepting payments in the Egyptian pounds, the more international operators will be encouraged to participate in Egypt,” he elaborated.

During the Q&A session, Eng. Tarek El Hadidy, Chairman & CEO of the Egyptian General Petroleum Corporation (EGPC), who was a member of the distinguished audience, highlighted the serious challenges that the Egyptian oil and gas sector is facing, including international operator receivables and an urgent need to secure international financing to develop Egypt’s deep offshore hydrocarbon reserves. He has underscored the government’s serious commitment to addressing such challenges in order to unlock the country’s substantial energy potential.

The roundtable reflected on TOGY team’s efforts in the sector. Tamer Ismail explained that they have interviewed a number of executives in the industry and learned about their insights, their activities, and their opinion about the Egyptian energy market. This is where the value of the publication lays, said Ismail, and he emphasized his gratitude to the interviewees for this year’s outlet. The distribution of The Oil & Gas Year Egypt 2016 publication will start in September.