TO BE A JOINT VENTURE OR NOT TO BE? 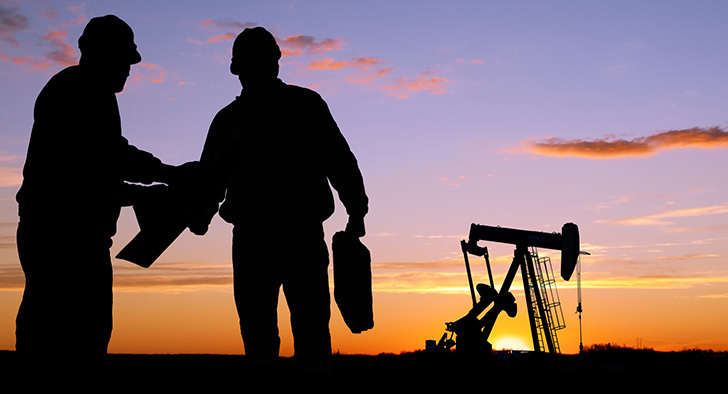 Although Egypt’s oil and gas industry centers on national oil companies (NOC), the government encourages investment by international firms (IOC). Their involvement in the production of petroleum contributes to Egypt’s balance of payments with inflows for foreign direct investment (FDI) to finance projects and revenues from production. Additionally, there are also outflows of foreign exchange used to purchase capital goods and services sourced from abroad, as well as profit remittance. Accordingly, in Egypt’s upstream sector, production continues to be led by global organizations, with some 47 foreign companies involved in 100% of Egypt’s oil and gas production.

Foreign investments in Egypt’s upstream must take the form of a joint venture company (JV) with the Egyptian General Petroleum Corporation (EGPC). Under the terms of a production sharing agreement, which formally manages partners’ relationship for a specific exploration, these public-private JVs share the responsibility of operations, capital allocation, and project risks. While super majors have access to funds, resources, and necessary know-how, why would they choose to enter partnerships with EGPC, beyond the fact that it is a regulatory requirement to operate in Egypt? In other words, are the benefits of creating a JV also shared between both partners?

Capital and Ownership
Considerations for JVs

All petroleum projects are capital intensive, with upstream activities carrying the biggest burden. Partnering with other organizations facilitate the accumulation of capital. Yet, in untested markets, partnering with the government offers additional incentives in recovering capital expenditures and sustaining forex flows.

In Egypt, EGPC does not provide financing for upstream projects. This, in turn, has lead to higher FDIs in the market. Moreover, JVs’ foreign investors receive a larger share of the oil and gas produced in order to offset their capital cost. Additionally, the state has shown willingness to adjust prices paid to purchase IOCs’ equity production in order to remain competitive. In early September 2016, the Egyptian Ministry of Petroleum agreed with Royal Dutch Shell to re-price gas produced in phase 9C from Burulus field to range between $2.5 and $5.88 per thermal unit.

EGPC includes a model production sharing agreement in the company’s bid rounds for new discoveries. As a result, in the pre-JVC stage, foreign investors are made aware of the terms and conditions of the partnership with the Egyptian state. The model agreement clarifies, among other dimensions, timeframes associated with the commencement of commercial production, the relinquishment of concession areas, minimum work and financial obligations, amortization periods, and the disposition of production. Diaa Eldin M. Kassem, Deputy CEO of Production at EGPC, explained that “the JV is only established after the foreign partner completes exploration wells and presents an acceptable Development and Production Plan.” This gives the IOC a chance to assess the viability of the concession under agreement, and to compare the prospective outcome to the costs associated with establishing the JV before deciding to move forward with the partnership.

Moreover, a report published by the Oxford Institute for Energy Studies, under the title Oil in Egypt, Oman, and Syria: Some Macroeconomic Implications, by Randa Alami, stated that a country’s macroeconomics factors play an important role in attracting international financing and creating favorable investment climates. The availability of funds improved when fiscal regimes enhanced the ability to cope with the instability of oil revenues and where financial systems were successfully reformed.

Accordingly, Egypt has been exerting much effort to reaffirm the country’s sovereignty in facing political turmoil and conveying the message that it is safe to do business in the country. Furthermore, the Ministry of Petroleum is working on reforming various aspects of the oil and gas market, starting with the liberalization of the mid-stream sector in the form of the New Gas Law, as well as the privatization of several entities operating in the downstream segment with the launch of initial public offerings for Enppi, MIDOR, and Ethydoc companies, among others. Yet, Kassem firmly declared that Egypt has no plans to cease government involvement in the upstream arena. He added that “without JVs with EGPC, there will be no control.”

It is important to note that partnering with NOCs in terms of capital structures has some downsides. Ownership structures within the government are complex. They may include ministries, public sector firms, such government-owned banks, intergovernmental organizations, and other stakeholders such as unions. This dispersion of government ownership complicates oversight, given that public owners differ in their mandates, ownership objectives, and perceptions of their role as shareholders.

Control and Governance of JVs

Public-private joint ventures face special governance challenges that differ in important respects from those firms that are entirely state-owned or entirely private. The two classes of owners hold different views on critical governance issues as risk appetite, disclosure and transparency, and environmental standards. Such firms are subject to complex and unclear reporting regimes, in part, because each partner must comply with different regulatory constraints and reporting requirements.

According to Jennifer Bremer, an Associate Professor of Public Policy at the American University in Cairo, the Egyptian government has made a considerable effort to introduce standards of corporate governance in both public and private firms. In her report titled Towards New Arrangements for State Ownerships in The Middle East and North Africa, she stated that in 2003 the Ministry of Investment launched the Egyptian Institute of Directors (EIOD) that works on promoting good governance in Egyptian state-owned entities. Furthermore, Egypt became the first country in the region to issue a corporate governance code for state companies in 2006.

On the operational side of JVs, Ahmed Moaaz, SDX Energy’s Country Manager in Egypt, stated that foreign investors need be eased into understanding how procedures are carried out in Egypt in order to grasp the cultural implications of doing business in the country. He added that current agreements “put no constraints on foreign investors. On the contrary, the text of the agreement states that the created JV operates in the best benefit of both partners, the IOC and EGPC.” Accordingly, each partner assigns a committee to partake in the management of the JV and to represent the partner’s interest. As is the case with many organizations, newly established JVs go through the normal stages of forming coherent teams. Therefore, time and effort should be allowed for organic synergies to develop between the two partners.

Ahmed Moaaz further noted that the JV’s overheads can erode the company’s profits. He said that “the Egyptian government is under a lot of pressure to address the country’s economic situation and unemployment. As a result, the JV’s G&A (General and Administrative Expenses) is overloaded with the cost of excessive staffing.” EGPC’s Deputy CEO of Production, Diaa Eldin M. Kassem, agreed as he stated that because EGPC is state-owned, it is governed by certain clauses under the labor law that grants government workers tenures. He added that “as a result upstream projects are burden with a large number of (blue-collar) workers, to the point that we have to cut back on hiring specialized engineers.” Additionally, employment and annual salary increases of government employees are secured under their tenure and cannot be rated according to their performance. While in private-companies, employees are evaluated against predefined performance measures and are awarded annual bonuses based on their achievements.

Risk-taking is a fundamental driving force in business, with corporate governance ensuring that risks are properly managed without compromising the rights of business owners. Therefore, companies resort to JVs as a form of risk mitigation, since risks are shared among the partners and a JV is easier to unbundle. The involvement of EGPC, namely the Egyptian government, provides additional risk coverage in terms of access to mid-stream and downstream sectors, as well as facilitations when dealing with other governmental institutes.

Exploration concessions have certain performance standards, which are specified in each individual agreement and generally include the drilling of a specific number of wells. It is the responsibility of the foreign investor to meet these key performance indicators and address associated risks. Though, EGPC’s Kassem, noted that “the cost of production in Egypt is amongst the lowest globally, at about $4 per barrel. As a result, IOCs are able to recover their capital expenditure more rapidly than in other markets.”

SDX’s Country Manager, Ahmed Moaaz, agreed, he added that “this stands true of onshore exploration, yet the cost of offshore production is comparable with global markets.” However, Moaaz confirmed that IOCs are able to cut down costs because, “Egypt has an amazing network of infrastructure and service companies that is unprecedented anywhere else in the world. These service companies employ Egyptians and therefore can offer exceptional services at affordable prices.” Additionally, royalties and taxes for upstream activities are covered by EGPC.

However, the biggest risk associated with Egypt’s upstream market lies in the right to dispose of equity production. According to a model agreement posted on GANOPE’s website, priority is given to domestic demand. Therefore, IOCs are able to dispose of their equity production within the local market by selling it to EGPC, thus bypassing additional expenses associated with transporting oil and gas abroad and volatility of global markets. Yet, this in itself has brought on a new set of difficulties, as the government struggles to provide USD to pay for these purchases. As of early October 2016, EGPC owed around $3.5 billion, down from $6.3 billion, in backdated arrears to IOCs, accumulated since 2011. Although the government continuously works to ensure that outstanding payments to IOCs do not further accumulate, with the Ministry of Petroleum paying $5.4 billion to cover all arrears for the fiscal year 2015/2016, many foreign companies have restricted their investments in Egypt, or halted them all together, until the government pays back the outstanding amounts. Therefore, delays in payments have led to delays in production. Accordingly, Kassem stated, “resolving outstanding arrears is in the best interest of everyone involved,” because EGPC understands the importance of partnering with major oil and gas companies.

Although the balance of risk sharing seems to tip in favor of EGPC, with the IOC bearing the majority, the Egyptian government is tasked with the burden of attracting foreign investors and keeping them interested in the market, while reassuming them that it is safe to continue operations in the country.

In light of the high cost and risk of recent discoveries in Mediterranean deep-water, Egypt has taken positive steps towards reforms to improve the investment conditions underlying Egypt’s oil and gas industry. EGPC has put forward new models for production-sharing agreements to achieve appropriate revenues and encourage foreign investors to fund and accelerate production. The government efforts seemed to have yielded promising results. Egypt’s Investor Index for 2015, published in The Oil & Gas Year, stood at 85.2, just shy of Qatar, which demonstrates a strong confidence in the market. More than 90% of respondents participating in the Index rated business conditions in Egypt’s oil and gas industry as positive, and nearly 86% believe that conditions will continue to remain positive over the course of 12 months. In regard to reliability, over 71% of investors perceived Egypt’s political and economic climate as stable.

Foreign investors and EGPC profit from their ongoing relationship through established JVs. It is beneficial for both to work together on continually reforming operations within the sector and enhancing performance to lead to higher production levels, an objective on which both entities agree.