The New Gas Law between Drafting and Implementation 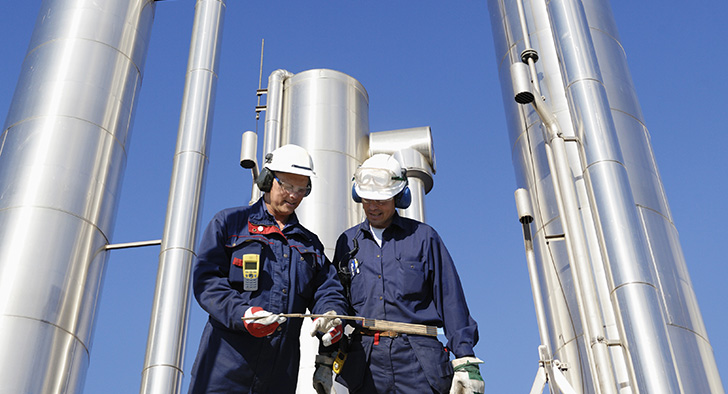 Egypt is currently facing a gas deficit as a result of a drop in production levels at the same time as domestic energy consumption is rising. Drastic measures were required to return balance to the Egyptian gas market.

In alignment with the ministry’s efforts to free the energy market, the Egyptian National Gas Holding Company (EGAS), guided by the Egyptian General Petroleum Corporation (EGPC) directives, set out to develop a competitive and transparent gas market in Egypt, by drafting a new legal and regulatory framework for the downstream segment, in what is being termed the New Gas Law.

The country’s dependency on natural gas deepened in the past decade, tipping demand to surpass supply, due to economic growth, coupled with urbanization and industrial prosperity. The Ministry of Petroleum thus allowed the import of natural in order to meet the ever increasing local demand of households, energy intensive industries, and power generation. This has put strenuous requirements on the government, with defaults on contract commitments towards international gas companies, with the government footing the bill of price subsidies.

Therefore, the government set forward various reforms to further liberalize the energy sector, including price adjustments, the expansion of production, and strengthening governance and financial viability of national oil companies and authorities.

The Jurisdiction of the New Gas Law

The New Gas Law jurisdiction is gas entry point to the national distribution grid of natural gas and the downstream market, Eng. Amira El-Mazni, Vice Chairman for Gas Regulatory Affairs at EGAS, stated in an exclusive interview to Egypt Oil&Gas. On the other hand, upstream concession agreements will continue to govern locally produced gas, while gas imports remain being governed via permits granted by EGAS and the Egyptian General Petroleum Corporation (EGPC).

By virtue of the New Gas Law, EGAS will be obligated to allow access to its owned distribution grids to licensed shippers. Since 2015, EGAS voluntarily provided access to third parties for the transportation of imported gas. The new law will regulate this access to further expand its usage by contractors and third parties, with the aim of ensuring an increased and diversified supply to the domestic market.

Eng. El-Mazni further added that the New Gas Law will thus facilitate the integration between the upstream and downstream segments of the market by opening up domestic trade for upstream firms. It will allow the Egyptian government to grant local sales rights to those contractors who do have it in their current concession agreements. “Most concession agreements since 2008 give contractors the right to dispose of their gas locally. The new gas law will allow those contractors to exercise these rights,” said Mohamed Khafagy, General Manager for Economic Affairs at EGAS, in a statement to Egypt Oil&Gas.

Khafagy added that entry into the downstream market will occur gradually, with the initial phase estimated to start with no more than 17-18% of contractors’ equity gas. As he further explained:“This will allow the government to exam the impact of the new gas law on the downstream market and to take corrective actions as needed by adjusting the percentage of equity gas contractors that are allowed to sell locally, and therefore identify the optimal market balance.”

Once contractors are granted the right to directly sell to domestic buyers, they enter an agreement with the Egyptian Natural Gas Company (GASCO), which operates the transmission grids and is responsible for the transportation of the gas. The relationship between the contractor, who is a seller in this incident, and the buyer is governed by the agreed upon contract. Similarly, the contractor’s relationship with GASCO is governed by the transportation agreement. Under these provisions, the contractor is obligated to pay a tariff to use EGAS-owned network, where these funds are used to reimburse EGAS for its capital expenditures and are paid through GASCO.

While the framework for downstream gas sector is already formulated, some issues still remain unresolved.

GASCO needs to specify how it will achieve a transportation balance, as contractors will provide a continuous supply of gas to the grid, while at the same time consumers may experience disruption in their demand due to maintenance or production outages.

Furthermore, questions surrounding cost recovery fluctuation for contractors, as these volumes change from one quarter to the next, also need to be addressed at a later stage.

Egypt’s New Gas Law remains in the drafting phase at present and the government still has a long road ahead reaching further beyond the text of the law.

The process of implementation of the law will be another step towards the gas market liberalization goal. EGAS, together with concerned ministers, will thus have to address expected implementation barriers.

“The new law is an essential part of the gas market downstream liberalization,” noted EGAS’ Vice Chairman for Gas Regulatory Affairs, and in that accord, she believes that EGAS, together with EGPC, should work on facilitating and streamlining the approval process. As Eng. El-Mazni further added, “the smoother this process is, the easier it becomes. The more players we will have in the downstream market, the more gas we will have in the downstream market.” Khafagy agrees, saying that “when the market is saturated with supply, the better it will be at meeting the demand of all sectors. This will lead to market stability.”

Another issue pertains to royalties and taxes. Under current concession agreements, contractor’s profits from local sales are taxable, yet EGAS pays all relevant taxes on their behalf. According to the new law, once contractors dispose of their share of gas into the local market, they will be required to pay royalties and taxes. Both Eng. El-Mazni and Khafagy agree that the government needs to design stimulus schemes in order to incentivize upstream companies to direct more of their equity gas towards local consumption.

Furthermore, upstream contractors are interested to learn how supply swapping will be avoided. Economic Section’s GM at EGAS said that “some firms have inquired about the guarantees provided by the gas regulator or the New Gas Law to ensure that misdirection of supply will not occur. In other words, how to guarantee that what was ordered is delivered.” He stated that the only guarantee is ensuring that the market is regulated by forces of supply and demand. “An abundance of supply will guarantee that swap or diversification of gas will not occur. The more suppliers are involved in the market, the better the capacity will be to fully cover domestic demand,” concluded Khafagy.

Eng. Amira El-Mazni stressed that EGAS should work together with contractors to understand their needs and review all possible actions required to motivate upstreamers to interface with the downstream segment, as well as address any of their concerns about dealing with an unfamiliar downstream market. Otherwise, contractors may lose the trust in dealing with the government and become subjected to the uncertainty of buyers’ credit worthiness. She added: “I call out for the decision makers to consider these obstacles that might discourage contractors from entering the domestic trading market. They need to review all it takes to facilitate contractors’ disposal of the gas and entrance into the local market.”

In line with this sentiment, Shashank Krishna, an Associate with McDermott Will & Emery UK LLP, an international law firm with experience in the energy sector, supports collaborative strategy that the Vice Chairman at EGAS, Eng. El-Mazni, proposed. Krishna emphasized that drafting and implementing the law should come as collaboration between the Egyptian government and industry players in order for both parties to achieve their mutual benefits. He said that “a published roadmap towards the implementation of such reforms and wider consultation with the industry and other stakeholders will also ensure that the industry is in a position to exploit the opportunities that such reforms will present.”

Furthermore, Mohamed Khafagy confirmed that the government has considered all possible hurdles to implementing the New Gas Law, with the aim of benefiting from other countries’ lessons-learned. “We reviewed global cases, with similar market conditions as Egypt. We studied these cases to understand the pros and cons of each approach in order to learn from their experiences in freeing their gas markets. Furthermore, we are collaborating with international experts in the gas sector, with a focus on market liberalization. EGAS and EGPC conducted studies with consultancy firms to ensure that the drafting of the gas law and the implementation of the government’s liberalization efforts proceed with a structured methodology, supported with action plans,” he concluded.

A bird’s eye view of the New Gas Law shows signs that Egypt’s attempt to liberalize the gas market is having a positive effect on the sector’s growth. Law firm Associate Krishna noted that “an independent, stable, predictable, and commercial legal and regulatory architecture is essential to increase investments in the Egyptian downstream sector. While the details remain to be fully fleshed out, the proposed reforms are expected to unlock investments in the domestic gas value chain and create local jobs. The discovery of large gas fields in Egypt in 2015-2016 means that the proposed reforms are timely.”

Opening the market to fair competition will increase new investment opportunities to Egypt’s gas sector. Mohamed Khafagy affirmed that “this will lead to an eventual decrease in natural gas prices, because the supply will be diversified from imported shipments and also by allowing foreign partners to dispose of their shares in the production. There are a lot of benefits to opening up the gas market in Egypt whether to foreign partners or third parties, new shippers.”

Therefore, “the government is proceeding with market liberalization in terms of a free market, a competitive market, with the ultimate goal of having prices set by the dynamics of supply and demand,” as Eng. El-Mazni explained. She believes that a liberalized market is in the interest of everyone involved, as it gives investors accelerated opportunities to recovery of their capital costs in concessions. In addition, it alleviates EGPC/EGAS from the burden of providing hard currency necessary to pay for gas purchased from upstreamers.

Therefore, as Vice Chairman for Gas Regulatory Affairs concluded, continual interfacing and collaboration between upstream and downstream firms, together with government authorities, is vital to reaching a fully liberalized gas market in Egypt.