The New Age of Zohr 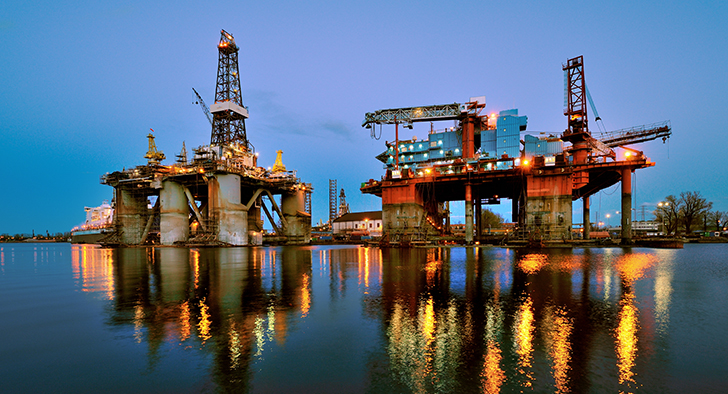 By Nataša Kubíková and Amanda Figueras

Egypt’s gigantic Zohr field has raised enormous expectations for the future of offshore exploration in the Eastern Mediterranean. As it is one of the largest gas finds in this region, there is no doubt that the country has found itself a goldmine, which has marked a launch of a new age for Egypt’s industry. After the drilling kicked off successfully in December and first test production in March showed positive results, there are only two questions left to answer.

When will Egypt’s gas export from Zohr be materialized? And how will the Egyptian government handle severe competition in the gas market in the Mediterranean region?

It is a widely known fact that Egypt once used to export gas to Israel, Jordan, and Syria in early 2000s. In recent years, before the Zohr discovery, booming energy consumption and depletion of country’s natural gas reserves had turned Egypt into a net importing nation.

Five years ago, the Israeli Leviathan field was the region’s largest gas find with 22 tcf of proven reserves. It was touted as a potential game-changer in the Eastern Mediterranean. Rising gas demand in Egypt led the country to sign agreements to import Israeli gas, but the measure had proved to be unpopular. But there was no other option but to continue importing needed gas supplies. Therefore, and in spite of discontent, Egypt had inked three letters of intent to import Israeli gas in early 2015. At that time, in an interview with Daily News Egypt, the then-Minister of Petroleum and Mineral Resources, Sherif Ismail, also announced that economic studies to import gas from the Aphrodite gas field in Cyprus were underway. There was a clear path for Egypt, start gas imports after 2017.

A sudden change announced itself in August 2015. It has marked an energy milestone for Egypt and the entire region alike. The numbers speak for themselves –  Zohr reservoir with its 30 tcf of estimated gas deposits is so far one of the largest gas find in the exploration history of the Mediterranean Sea.

According to first estimates, thanks to the Zohr field, Egypt is expected to double its natural gas production by 2018 and it will likely add an average of 2.7 bcf/d of natural gas to its production levels by 2019, as a study by the Egyptian Center for Economic Studies (ECES) forecasted. Such a boom will allow Egypt “to significantly reduce the expected daily deficit of 3 bcf of natural gas in 2018,” the report read. Further, it also stated that the discovery will help address the energy bill deficit and ensure growth rates of 6% by the 2018-19 fiscal year.

Moreover, the report explained that Egypt will eventually have an option to export up to 29% of the extracted gas, while reserving the rest for domestic demand. With this image of future prospect, Egypt will once again be able to aspire for ‘a net gas exporter’ role. The question is no longer ‘if’, rather ‘when’ and ‘how’.

Gas export projection allowed Egypt to play the checkmate on Israeli gas exporting strategy. “I think the Zohr gas find greatly reduces Israel’s ability to export gas to Egypt. It may possibly still send gas to Egypt to be liquefied and re-exported from the existing LNG terminals,” the Dubai-based analyst Robin Mills, Head of Consulting Manner Energy Group, wrote in an email to Egypt Oil&Gas.

As the analyst further explained, “Israel may have a short-term opportunity to export gas to Egypt until the Zohr field comes online, at which point I will be surprised if Israel maintains even a small market share in Egypt.”

Nonetheless, as Israel would soon lose its gas market share in Egypt, and it is highly aware of the fact, the country will necessarily seek to boost its diplomatic capacity to ensure that its exports are secured elsewhere. Israel will inevitably search for new customers, renegotiate deals with other regional states to expand them, and possibly seek to enhance its export deals even beyond the region. It would be an exaggeration to assume that Egypt’s gas export opportunities will be limited in this regard. Nonetheless, it is rather realistic to consider the difficulties ahead and be prepared to navigate well in the competitive environment.

With the addition of Zohr, Egypt’s total gas production will rise to 5.3bcf/d, which will by default reduce imports for country’s energy needs. This further confirms Egypt’s capacity to focus on gas exports. However, finding itself in a severe contestation with established gas players such as Israel or Cyprus, Egypt will need to search for efficient paths to the gas export market in order to maximize its output from Zohr. Although gas production is planned to be launched in 2017, and it will still take some years for the field to reach full-capacity output, the Egyptian government should be improving its gas export strategy already now, while doing its best to accommodate the demanding domestic needs.

Egypt’s journey to gas production from the Zohr offshore field has so far been smooth. Eni started drilling 20 wells in December. Two months later the company completed the authorization process for development of the field. In the same month, Egypt’s Minister of Petroleum and Mineral Resources, Tarek El Molla, approved the formation of the joint venture company between the Egyptian Natural Gas Holding Company (EGAS) and International Egyptian Oil Company (IEOC), PetroShorouk Petroleum, which is the subsidiary of the Egyptian company, Petrobel. PetroShorouk was tasked to complete the first stage of development of the Zohr field by the end of 2017.

In line with the planned progress, the Egyptian newspaper, Daily News Egypt, published information that the drill ship Saipem 10000 had arrived at the field in late December to begin drilling at the Zohr-2 well in the Shorouk block, which brought first results already a month later. Eni an-nounced that the well has delivered up to 44mscf/d of gas during production appraisal, and added that at the time of performing tests, up to 120m of the reservoir was opened to production. This positive development offered more than that. It was also confirmed that the well has a good production capacity and it is estimated to deliver of up to 250mscf/d in production configuration.

Eni further stressed that the company will conduct drilling of three additional wells in the Zohr field already this year. These will come in addition to the existing drilling wells – Zohr-1, Zohr-2, Nidoco North 1X, and Zohr-3 that was drilled by Saipem in mid March. Works on the onshore gas treatment plant construction have also already started, with bids for the offshore activities com-ing close to completion.

All pieces of a puzzle seem to have fallen in place and Eni is on its way to meet the agreed time-line. Zohr field is planned to begin production before the end of 2017, with an expected total out-put over 1bcf/d of gas. However, with a minimum development period of at least four years, it will be about 2020 before a full-capacity production starts in the Shorouk block. Eni therefore opt-ed for appraising the field “fast track development.” It was widely reported that Eni’s President met with Egyptian President Abdel Fattah El-Sisi the day before the massive discovery was announced, leading many to speculate the company was attempting to persuade the Egyptian gov-ernment to lead the charge for fast-tracking the timeline. This speed-up strategy may bring valu-able fruits to country’s gas export vision.

Zohr is an invaluable resource for the economic development of the country in terms of gas exports. While the find is large enough that exports could be planned for, Egypt’s domestic market would probably need to be supplied first, no small task for an economy that gobbles up massive percentages of natural gas for electricity production.

The domestic production, however, is far from ideal for a company that participates in a $12 billion investment deal, as better prices could be achieved by selling the fuel on the international market. Although the situation in the domestic market may be different in 2017, given the ongoing efforts of the government to diversify its energy supplies, however the political realities of the gas-starved nation may slightly postpone this more attractive option for a short period of time.

As Eni is covering the full investment in the drilling, which is expected to last around 26 months, it will see this capital reimbursed. The Shorouk concession agreement signed between Eni and the Egyptian government calls for 40% of revenues from production in Zohr to go towards recovering the investment in the fields of up to $7 billion. Eni’s repayment value will be covered over three years, while the remaining revenues will be split between Egypt, which will receive 65%, and Eni, which will enjoy 35%.

Although the agreement will be renegotiated again in 2019, the Egyptian government insists that all gas is to go to the domestic market, allowing exports only for excess gas. “The agreement states that all the production will be provided to the domestic market. Only in case of excess will exporting be allowed,” EGPC Chairman, Mohamed El-Masry told Daily News Egypt in January 2016.

These arrangements were seen to bone less well for the Italian explorer in one way or another. Perhaps as a reflection of that, already the day after announcing the find, Eni publicly intimated that it would be open to selling all or part of its stake in the Zohr concession areas, however, no further details were given. Although the Egyptian government and Eni resolved the issues in De-cember, already in March 2016, pending possibility for Eni’s stake sale has become a new shaky reality.

As all major international oil and gas companies cut their spending amidst global oil and gas price slump, Eni, in its new 2016-2019 business plan, has also announced that it envisions to shrink its investments and to sell stakes in giant oil and gas fields in Egypt and Mozambique to help it prop up dividends. “The disposals will be mainly through the dilution of our stakes in recent and material discoveries,” Eni CEO Claudio Descalzi was quoted by Reuters as saying.

The state-controlled company said, as Reuters reported, that in addition to cutting overall group capital spending by 21% and exploration budgets by 18%, it will also target $7.9 billion from asset sales and $6.7 billion from cost cuts. Descalzi, nonetheless, added that in Eni: “We think gas will be the future.” However, as more than 50% of the cost reduction is expected to come from renegotiating contracts, Egypt is likely to face major changes in its Zohr production deals soon.

Nonetheless, in light of most recent progress and enthusiastic activities in the Mediterranean areas, Egypt’s Petroleum Ministry is expecting more discoveries in the future. A number of companies were reported to have currently started conducting their studies and they will release their preliminary results soon. In the wake of boosted investment interest, Petroleum Minister El-Molla, revealed petroleum sector’s plans to develop potential new fields, increase the number of wells and intensify exploration, as well as encourage investment from foreign partners.

The announced Eni’s plans may lead some to believe that a projected timeline will need to be re-visited and other structural issues addressed. However, as it has been confirmed that Eni’s discovery of the Zohr field on Egypt’s Mediterranean coast has raised foreign companies’ interest and attracted potential investment in the deep water areas nearby, the Egyptian government will likely have numerous alternatives at hand to face any new challenges ahead.