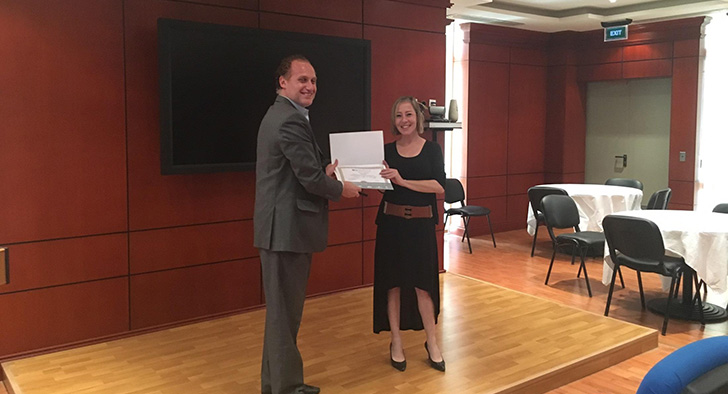 The Egyptian oil and gas industry has been challenged most recently over its people development structures and processes. Schemes for the development of technical and non-technical employees can translate into companies’ success or failure.

Middle East Oil Refinery (Midor) and Tharwa Petroleum Company have realized the need of people capital development. That is why the two companies’ HR departments designed a comprehensive program to provide different training for all their employees.

According to Rania Helmy, “we give priority to other employees outside of the middle and top management structures to attend additional trainings.” And Tharwa goes a step further beyond the joint initiative as it organizes regular technical, financial, operational, and safety trainings.

Midor & Tharwa employees enjoyed two inspiring courses in Self Development & Self Management and The 7 Habits of Highly Effective People. These courses were designed to alter “the ways of thinking and seeing” that would help people not only to improve professionally, but also “to lead a better life” based on ‘see, do, get principle,’ Amr Helmi Sallam, Deputy General Manager of Team Misr explained in an interview with Egypt Oil&Gas.

Self Development & Self Management

This four-day course for the two companies’ employees came with an idea in mind to enhance personal capacities of staff, which can then translate into enhanced productivity in their workplace. The notion that training in personal qualities engages closer with participants and make them more receptive of presented concepts for work environment, has been applied successfully by Team Misr.

The Self Development & Self Management course proved that this approach is highly effective. Under this framework, Team Misr delivered training In Time Management, Conflict Resolution, and Building Self Esteem and Assertiveness.

A key element of effective and efficient time management is to learn to delegate work to others. According to Amr Helmi Sallam, Deputy General Manager of Team Misr, “delegation means that a manager gives up some of his/her responsibilities to some of his/her subordinates in order to free him-/herself to perform tasks that others cannot do. This allows him/her to manage the time better in order to accomplish more tasks.”

But delegation is an ambiguous mechanism at work. Some managers are reluctant to entrust work assignments to others for various personal, professional, or practical reasons. But this seems rather counterproductive. As Amr Sallam put it: “The first problem is with a generally adopted perception based on which some managers feel that delegating some of his/her authorities sends a signal to the top management that subordinates are capable of performing certain tasks alone and the manager is easily replaceable.”

In parallel to this is the idea about knowledge control. If a general understanding of a manager is that he needs to control sources of information and protect it from other colleagues, it becomes difficult for the manager to delegate workload to others in a team. “The fear of losing source of information, position, and authority reveals why some managers may be reluctant to go down this road,” said Team Misr’s Deputy GM.

But what is at stake is less threatening to managers, in fact, and more damaging to the companies. “A manager delegates the authority, but not the responsibility,” emphasized Amr Sallam, hence, tasks that are assigned to other people in a team grant them the right to make decisions, to bring in new information, and to evaluate it. The overall responsibility remains in the hands of managers themselves and with it the desired authority.

In corporate cultures that rely heavily on centralization of management, delegation becomes difficult for structural reasons as well. Amr claimed that “the more the organizations’ structures are decentralized, the easier it will be to introduce delegation patterns.”

Midor and Tharwa philosophy is to educate and train future leaders in Egypt’s oil and gas industry. The approach of the two companies is that their people development scheme introduces new practical exercises within interactive training sessions. Team Misr delivered this aspect of training through role playing games. The intention, as trainer Sallam noted, was to show that “delegation is a basic, highly important, and an efficient tool for managing staff to be able to evaluate performance of those who were authorized to accomplish a task.”

All in all, as Amr Sallam put it, “a single person should not be a key factor that would determine success or failure of a company, instead a well-functioning system of role delegations is to be adopted, as it guarantees success for a company in a consistent way.” Delegating work to others is undoubtedly a key feature of efficient management and a functional tool to manage oneself.

Another key segment of Self Development module focused on developing techniques for employees across the corporate hierarchies to resolve conflict situations. The course material introduced the general setting by stating that “a vast majority of people cannot avoid interactions with a wide range of personality types including those who are more complicated to deal with. But success sometimes depends on managers’ ability to work well with stubborn, inconsiderate, or difficult behavioral patterns.” But this relates to all professionals regardless of their position.

With this understanding, the course instructed participants about how to handle complicated work relations. Team Misr has designed a simple five-step process. Although some may believe that these are straightforward principles of daily socializing patterns, many seem to not be able to perform them fully.

Amr Sallam summarized them in the following way: “We should believe and accept that people are different; start reading others to quickly know what type of personality our co-worker is by observing his/her reactions; understand the needs of others; choose a strategy to deal with different styles that people have; and evaluate whether selected strategy brought intended results.”

Wael Bazid, Tharwa’s Assistant General Manager for Agreements, shared his thoughts about the ongoing joint training program and revealed to Egypt Oil&Gas that his improvement comes as “a gradual process.” He added that “with each training course I am receiving one piece of a cake and by the end of the training program, with its additional sessions, I will be able to execute changes in my workplace.”

As it seems, there is only a simple advice and that is to keep reminding ourselves of the five key steps and search for other innovative approaches to enhance our performance.

One such approach is to adopt The 7 Habits of Highly Effective People, an additional training course that Midor&Tharwa offered to their employees. It aimed at delivering seven key commandments of an effective professional.

Instructors encouraged participants to be proactive; begin with an end in mind; plan and prioritize accordingly; think in a win-win scenario; seek to first understand, then to be understood; synergize, and sharpen the soul.

The matrix is rather logical, yet its implementation in daily routine may pose some challenges to everyone who tests it. Nonetheless, this training, held in energetic atmosphere of engaged people, was concluded with an excellent feedback.

Success of these various training modules by Midor&Tharwa depends on the fact that “the continuation of training is based on on-site monitoring and monthly evaluation of the progress that Team Misr and participants are achieving,” stressed Tharwa’s Training Section Head, Sara El Gammal, who submits regular reports. The dedication and efforts of the two HR teams inevitably promise to translate into tangible outputs in both Midor and Tharwa.