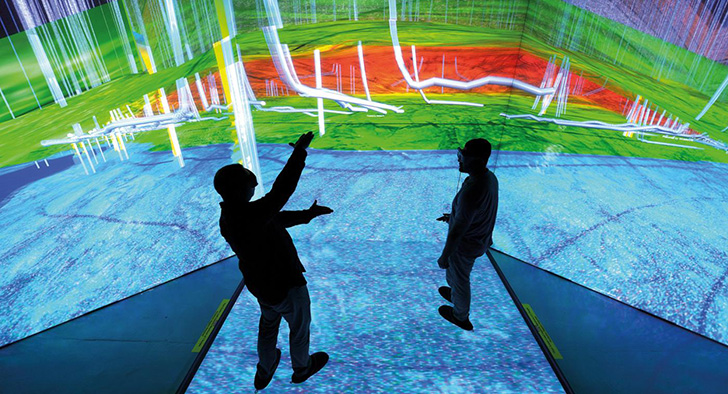 Drilling costs for oil and gas concessions can reach over $100 million. Calculations per field average between $5 to $10 million for drilling and completion expenses, as is the case for Eagle Ford and Bakken in the US, and the drilling of AG-115 well in Abu Gharadig field in Egypt, costing $6.5 million. Therefore, companies do not want to explore wrong locations, only to discover poor-yielding assets at the end of the process.

In their quest to learn what lies below the surface, decide how to bring it out, and better manage their reserves, energy firms contract Geoscience services from companies like CGG, Halliburton, Schlumberger, and Baker Hughes, to acquire, process, and analyze seismic data for thousands of sub-surface wells. These companies render an array of services in order to cover the demand from upstream firms across all spectrums of exploration, development, and production.

In an interview with the Eni’s CEO, Claudio Descalzi, about the Egyptian Zohr gas field discovery as part of the Shourouk concession, published by Eniday in June 2016, he said that “each discovery is the result of the geological knowledge and insights of a great team. The whole company is involved and brings its contribution.” This emphasizes that the involvement of Geoscience service providers is considered a partnership with contractors on the optimization of a resource.

In Egypt, the role of Geoscience begins with the tender process for new concessions. Contractors are required to buy preliminary data packages needed for oil and gas exploration as part of their bidding procedure. The Egyptian government allows companies to pay a nominal fee to review these pre-bidding data-packs, with the option to fully purchase the information if needed. These fees can reach up to $1 million, paid in a pre-exploration stage.

Some controversy has surrounded this issue as it leaves upstream companies with additional financial burdens. Furthermore, the overpricing of these data packs scares away smaller, innovative, more flexible firms that can actually accommodate their products and services to an individual country’s needs. Egypt can overcome these concerns by expanding the role of Geoscience firms across reservoirs’ lifecycle from discovery to bidding to production.

Geoscience plays a significant role in all phases of upstream. During the exploration stages of a discovery, petroleum firms rely on seismic analysis to search for commercially economic subsurface deposits, by recording, processing, and interpreting of artificially induced shock waves in the earth. Based on the data generated during this phase, companies can reach a decision whether or not to move forward with drilling.

In the 2016 interview, Descalzi further stated: “One thinks that geologists are all numbers and formulae, but the creative mind of a geologist is full of 3D images, enlargements of colored rocks, and seismic lines. In fact, geologists are more inventive than one might think, and they can even compose an authentic ‘digital picture’ of an exploration.”

The role of Geoscience continues well into field development and production through reservoir modeling that uses realtime feedback to optimize asset output.

The Role of Geoscience in Production Forecasting

Exploration companies must first determine the likely output of a reservoir in order to allocate the necessary resources. When this decision is data-led, operators have more confidence in the efficiency of the extraction process.

Surveying of potential sites involves monitoring the low frequency seismic waves that move through the soil below the surface of the earth. Probes are put into the ground at the spot being surveyed. They register if the pattern of the waves is distorted as they pass through oil or gas. In the past, this involved recording thousands of readings. Yet, due to technological advances in Big Data, companies can now collect millions of readings, thus vastly increasing the amount of data gathered during exploration. This gives a far more accurate image of what lies beneath. Data from any prospective oil field is then compared to that from thousands of others around the world, to enable geologists to make more accurate recommendations about where to drill. This has propelled the oil and gas industry into the petabyte-hexabyte realm of Big Data, as recent news published by Rigzone indicate.

Another case in point is Eni’s decision to invest in Zohr field. Descalzi explained how the company decided to move forward after buying the Egyptian government’s data packages. On the basis of the evaluation made by the International Egyptian Oil Company (IEOC), and with the lack of available seismic data in the provided packages, what emerged was an area in block 9 with a possible huge bio-structure, Eniday website further elaborated. Due to insufficient inputs, Eni reached further. The company extended the search to Egypt’s neighboring countries. All of the data from the scientific drilling carried out in Cypriot waters on the top of Eratosthenes were re-examined. As Eniday website pointed out, in April 2015, the Italian company called the geologists and geophysicists to a meeting to ask: “Are we confident that the structure exists?” The answer was “Yes.” “Are we confident that we have a controlled structural closure with the existing seismic 2D?” The same unanimous answer. Eni’s response was then “Ok, let’s go for it.”

In order for oil companies to leverage collected seismic data and gain insights that help increase drilling and production performance, while preventing environmental/safety problems, they rely on specialized service providers. Such companies possess the necessary know-how to collect, manage, and rapidly analyze seismic, drilling, and production information. Furthermore, they have the necessary expertise to deal with and store enormous data sets.

Forecasting stage necessarily leads into relevant seismic analysis for exploration purposes. Seismic surveys are a primary tool of exploration companies, both onshore and offshore.  Dimensional seismic surveys have lowered finding costs and allowed exploration for reserves not locatable by other means.

Artificial seismic energy is generated by vibratory mechanisms through the use of specialized equipment. Sound waves are bounced off underground rock formations and the waves that reflect back to the surface are captured by recording sensors. Analyzing the time the waves take to return, integrated with existing borehole well information, aid geoscientists in determining the location of prospective drilling targets.

The International Association of Geophysical Contractors explained the differences in onshore and offshore data collection processes. In onshore data acquisition, the energy source for a seismic survey is more commonly a Vibroseis. In marine operations, a specialized vessel tows a seismic streamer, which is a collection of cables with seismic sources and hydrophones attached. The seismic sources use compressed air to produce acoustic energy. The hydrophones capture the returning sound waves.

Geoscience service providers thus possess necessary expertise to collect and interpret required data during the analysis phase, as well as the know-how on managing related equipment in terms of logistics and transportation.

The data recorded from a seismic survey is originally in its raw form and must be further processed in order to provide a layout of reservoir modeling. Before it can be used, it must go through a series of computerized processes, which include filtering, stacking, migrating, and other computer analysis. These processes make the data useable and require powerful computers and sophisticated software. Processing of data can be very expensive and time-consuming, depending on the size of the area surveyed and the amount of data acquire.

The resulting processed data must be interpreted by the geophysicists or geologists. All seismic data is subject to interpretation, where no two experts will interpret data identically. Hence, selecting a Geoscience service expertise is crucial.

The Shorouk concession in Egypt was previously held by Shell for ten years, during which nine wells were drilled without commercial results. Shell missed the Zohr discovery, because they were looking at a classic geological analysis of the Nile Delta (Miocene sands), not the sea-mount carbonate variety that led to the recent discovery. If analysts working on Shorouk data did not shift their analysis paradigm, Eni would not have moved forward with their bid to explore Zohr field.

Therefore, the know-how of geoscientists plays an important role in optimizing upstream operations, and this leverages the role of the service providers as they have access to a diversified talent pool and flexibility in allocating specific expertise to specific developments, depending on the geological composition of the area under survey.

This is not always the case in Egypt, however, as vintage seismic data can hinder development and enhancements in existing concessions, as was the case with Apache Egypt. KPC’s Exploration Manager, Martin Oldani, stated that acquiring modern 3D seismic data was a key to Apache’s success across the Western Desert. According to Apache Corporation’s website, Oldani added that “BP [British Petroleum] and GUPCO [Gulf of Suez Petroleum Company] had initiated a survey in the WD-33 concession at the Abu Gharadig field. Apache was able to improve the seismic design template in the WD-30 and WD-09 surveys that followed.”

Despite these achievements in Egypt, the country lacks the necessary tech-power to analyze large amounts of complex seismic data collected during a concession’s lifecycle. Case in point, seismic data related to Zohr discover, was processed at the Eni’s Green Data Center, 50 meters away from the company’s headquarters in San Donato. The center houses High Performance Computing (HPC) super computers used to process seismic data and simulate oil and gas reserves, resources that were not available to the Egyptian team.

Seismic data is a fundamental right to all exploration and development companies. It is considered to be a service that the Egyptian government should promote in order to stimulate growth and productivity in the Egyptian energy sector. In addition, it should encourage and facilitate the involvement of independent service companies to perform seismic analysis for concessions at the pre-tender phase, and possibly continue well into exploration, working with upstream contractors. This will eliminate the unnecessary rework caused by the acquisition of pre-bidding data-packs since international oil companies (IOCs) perform their own seismic analysis, once they are granted licenses for concessions. IOCs then hand over this new dataset to the Egyptian General Petroleum Corporation (EGPC) once their contract expires.

In line with that, the country should regulate the availability and accessibility of seismic data during all stages of resource development, by allowing collaboration between geoscientists in the market and facilitating access to and investments in data centers, super computers, and databanks to enhance the seismic data segment performance.