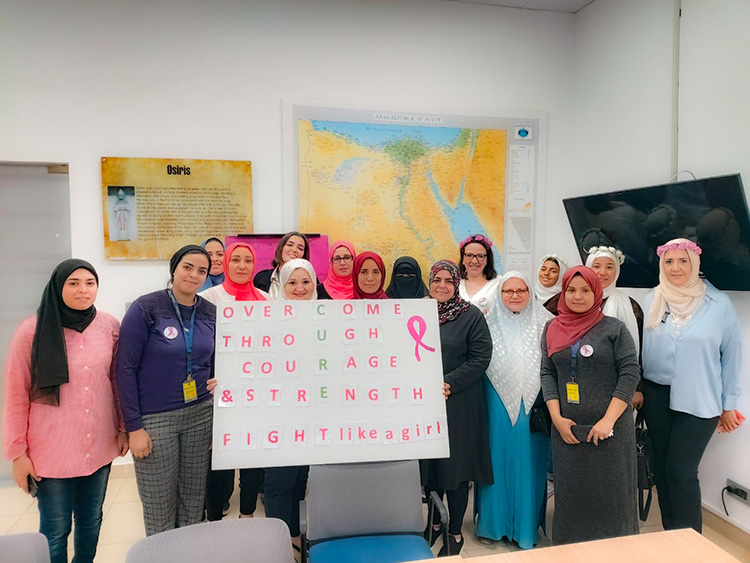 The session was opened by Heba El Karrar, Commercial and Marketing Analyst at Schlumberger Egypt and East Mediterranean Region. El Karrar referred to her keynote speech at last year’s event about a breast cancer fighter who, unfortunately, lost her battle. She noted that “the lesson learnt at that time was that we really need to take care of our health,” adding that “this disease can be easily controlled if it is diagnosed early.” El Karrar stressed that the main aim of the event was “to focus on today’s instructions and raise awareness by spreading the word.”

Dr. Manie started by differentiating between normal and carcinogenic cells. “A normal cell divides in an organized and systematic way and stops at a certain point; however, a carcinogenic cell’s division is uncontrollable, unorganized, and unstoppable, leading to a tumor,” Dr. Manie said. He noted that breast cancer accounts for 25-33% of all female cancer cases, adding that 50-years-old is the median age of diagnosis and the lifetime risk for women being diagnosed with breast cancer is currently one in eight.

Despite 90% of cancer causes being unknown, and the other 10% being genetic, there are some known factors that increase the risk of breast cancer. These factors include
“gender and age as women are 100 times more likely to get breast cancer than men, and as risk of diagnosis increases as you age; a family history of breast cancer; and having had breast cancer before,” Dr. Manie clarified. He also mentioned “prolonged hormone exposure especially to estrogen from early menarche or late menopause, nulliparity, having the first child after the age of 30, taking hormone replacement therapy, and oral contraceptive pills. Other factors are an unhealthy diet, obesity, and alcohol consumption.”

On the other hand, some factors that help decrease the risk of breast cancer include full-term pregnancy at a young age, multiple pregnancies, breast feeding, regular exercise, and maintaining a healthy diet.

Dr. Manie also mentioned signs that require medical attention if they occur. These include having a breast mass, skin dimpling, and nipple retraction. Other serious signs are peau d’orange where the breast skin resembles an orange peel and bloody nipple discharge. Pain is not a clear sign of breast cancer, as 80% of it is not painful.

“Any tumor has four stages: the first is the easiest to cure, and the fourth is the hardest,” Dr. Manie said. Therefore, early detection is very important as it could mean a higher cure rate and less treatment.

Early detection has two methods: self-examination and imaging. “Self-examination is very important as it familiarizes us with our body, making changes easier to notice,” Dr. Manie explained. As for imaging, there are two techniques. Mammography starts at the age of 40 if there is no family history of breast cancer or 10 years younger than the family member’s age at diagnosis. The other method is the magnetic response imaging (MRI) which is used for young women with high risk starting from the age of 25.

Genetic testing, however, is done if there are two breast cancer cases, at least one of which before the age 50, on one side of the family or when a close relative has a gene mutation or has cancer in both breasts. It is also done if a first- or second-degree relative is diagnosed at the age of 45 and older or if a male relative has breast cancer.

The second is surveillance, which requires clinical examination every 6-12 months from the age of 25, in addition to annual breast screenings using MRI from 25-29 years old, then doing annual breast MRI and mammography every 6 months from 30-75 years old.

The third option is chemoprevention, which means taking treatments like Tamoxifen, Raloxifene, and Aromatase inhibitors.

Dr. Manie also discussed some breast cancer myths. These include believing that a biopsy will spread tumors, “when it actually helps identify the tumor type and its treatment,” Dr. Manie clarified. He also mentioned the belief that deodorants cause breast cancer has no scientific proof. And, also that choosing a mastectomy instead of breast conserving surgery may reduce the risk of breast cancer appearing again is not true.

Concluding the session, Dr. Manie noted that breast cancer is a curable disease when detected at an early stage.

The event continued with interactive activities. These included the attendees writing advice or resolutions for fighting and overcoming breast cancer, which were considered Schlumberger’s main message of the day. Attendees also solved a puzzle, forming messages to those fighting breast cancers. The main message was motivating them towards “CURE”. Other messages included “Overcome through Courage & Strength” and to “Fight like a Girl”.

To sum up, detecting breast cancer at an early stage is the golden solution to overcoming this disease.