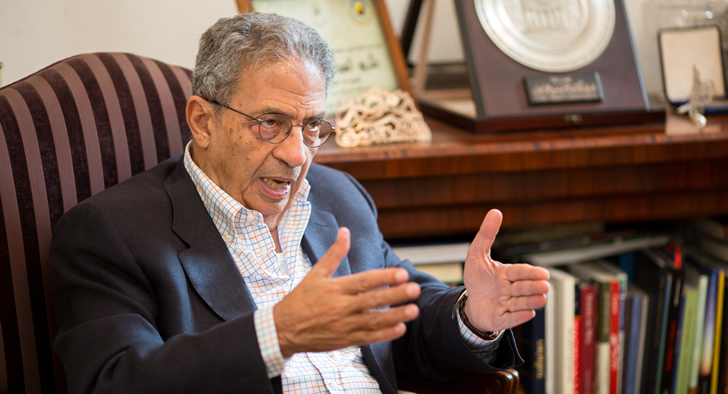 It is often said that politics and the economy are two sides of the same coin. With a clear focus on energy, Egypt Oil & Gas sat down with one of Egypt’s leading political minds, Amre Moussa, to explore the other side of the Egyptian coin.

Economic and Political Aspects of Zohr

The interview began by a review of the impact of Eni’s latest massive gas discovery in Egypt “Zohr”. Moussa expressed his happiness as a citizen after hearing about the discovery, emphasizing the timing of the discovery. “I feel that the discovery came at the right moment, given the economic difficulties Egypt is facing. This discovery opens the door for our needs to power generation, our needs for energy, sustainable development. In addition, the discovery also adds to the strength of the economy.”

The mega gas discovery is believed to have the ability to change both the economic and political scene for Egypt; a very influential factor for the region would be the decision to export part of Zohr’s production. Moussa addressed the issue by pointing out that the decision to export natural gas should only be dealt with according to a plan, after conducting studies, and based on the country’s local needs, as well as the policy for exporting. “The priority should be for the citizens to feel that their lives is going in a better direction, and that the discoveries they are reading or hearing about have brought them more benefits; on the other hand, we cannot restrict chances for export.”

Recently Cyprus’ Energy Minister, Yiorgos Lakkotrypis, stated that there was a high probability that the Shorouk block –where the Zohr discovery is based in– extends to the Cyprus’s Exclusive Economic Zone. Currently the country is still trying to prove its claim. When asked about the political implications if the claim was proven true, Moussa declined to delve into a topic that has yet to become fact; pointing out that, “the topic should only be addressed by the foreign company that made the discovery and by the Egyptian government. This is a very complicated issue, and also a very promising one.”

Shifting to local issues, Egypt Oil & Gas asked Moussa his thoughts on the topic of subsidies. Given the new discovery, average Egyptian citizens now feel that Egypt is rich with natural gas and will soon overcome its energy crisis. At the same time the government is in the process of removing subsidies, and thus increasing prices.

“Let us not confuse the issues, by talking about subsidies, production and aspirations of people,” Moussa said. “First we have to have solid information, and not to exaggerate. We have to be vigilant about so many complications affecting the issue. Not to mention, the gas from the field is not going to be produced tomorrow.”

“I believe that the way the government is dealing with this issue is a very wise one. I also believe the government has to share with the population the correct information about new and previous findings, thus, allowing the average citizen to celebrate the new find without building high expectations.”

As for the political ramifications of subsidies, Moussa explained, “the issue is not a black and white one. The current system of subsidies is benefiting those who do not need subsidies, therefore it has to be rearranged, so that the subsidies would reach the poor people who need help.”

“The issue of subsidies has a lot of elements. It has to be dealt with caution; however, we also have to be up to the challenge. In a poor country like ours the government cannot afford to shoulder all these subsidy policies, the issue has to be intelligently managed. Subsidies cannot continue, on the other hand a large part of the population is poor and need subsidies. The challenge here is how to do that and be a well-functioning economy,” said Moussa. He continued by pointing out “that the rich part of our society should carry part of the burden, bearing in mind that our real problem is poverty.”

The government is working intensively on increasing gas production; however, given the natural gas shortage the country is currently experiencing, the decision to choose between allocating gas to electricity generation versus energy intensive factories is an ongoing issue. When asked about the topic Moussa responded, “it is an issue of management, one issue should not come at the expense of another. A good policy can satisfy both or at least establish a way not to harm industries, as well as investments in Egypt,” adding that, “The population needs a stable source of energy to meet their different life aspects, and this should be the priority. It is one issue but with many vessels.”

To resolve the gas supply situation, the Egyptian government is working on developing a way for factories to import their own natural gas, a move to liberalize the gas market in Egypt. “These issues should have been considered much earlier, but the government today is reconsidering all issues related to the topic and opening up. This is an important step, I agree with it,” said Moussa.

Discussions about importing natural gas would not be complete without pointing out the possibility of importing from the Israeli Leviathan and Tamar fields, given the convenience of existing infrastructure.

During his time as Petroleum Minister, Sherif Ismail discussed in an interview with Daily News Egypt, the idea of allowing factories to import their needs from both Israel and Cyprus. Moussa commented on the topic briefly by agreeing with the Prime Minister, pointing out that the issue should be based on purely economic considerations, and whatever the political repercussions may be, they should not be the driver of the decision.

Many attribute ongoing decline in oil prices to be some sort of political game. When Egypt Oil & Gas asked Moussa about his opinion on the matter, he had a concise response. “When analyzing a situation we should not start with conspiracy theories, we have to start by looking at many considerations, including politics.”

Sustainable energy is another topic of importance for the energy sector in Egypt. The Egyptian government has a target to produce 20% of its energy from renewable sources by the year 2020. While this is an ambitious goal to reach, the country is indeed attracting significant investments for this field. Moussa commented on the topic, noting that “this country will reach 100m people by 2020, and we are now in 2015. A government of 100m people has to have a plan. We have to deal with all the files pertaining to rebuilding the country. I believe that we have to put the country on the right track, and push the crate to move.”

Investors and the Parliament

Moussa continued, “Life today imposes new challenges on the parliament, on the government, and on us in the streets. Issues and problems should be lobbied to parliament members. I believe the ministry should raise these questions to parliament. Members of the parliament themselves will raise these issues as they are of their concern.”

Responding to questions about the impact of the new constitution on current investments in Egypt, especially once the parliament is in place, Moussa stated, “law and order are very important. The issue is about the economic policy, open economic policy, bearing in mind the elements of social justice.”

In closing, Moussa was asked about the static nature of the Egyptian government, a major obstacle to businesses. “This is a big challenge, it is called bureaucracy, and this bureaucracy is indeed a major challenge in the face of a government that needs to move as quickly as it can towards development, change, and linking up to the 21st century,” said Moussa

“It is one of the main elements that are in the way of progress,” he continued. “We definitely need a major change in the way bureaucracy is being handled, otherwise we won’t be able to move forward. Resolving this issue will impose many difficulties; however, I believe we will see some actions against bureaucracy soon. Any government that wants to succeed will do this,” Moussa concluded.