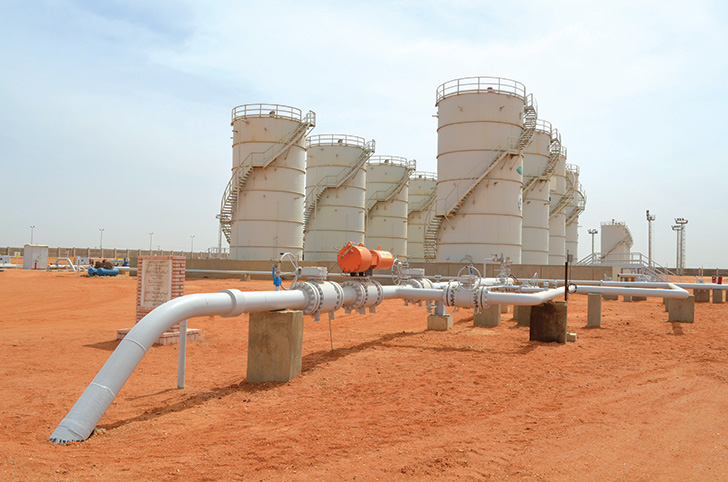 For this month, Egypt Oil and Gas Newspaper had the privilege of visiting one of the most ideal concessions in the region, the East Ras Qattara Concession (ERQ). Eng.Gamal Shanhory, Field Manager, showed us around so that we would get to understand how Enap Sipetrol (Petroshahd joined Venture) managed to implement an infrastructure that is cost efficient but yet extremely productive and massively successful.

Enap Sipetrol is a subsidiary of the Chilean governmental company.  ENAP is a multinational entity actively engaged in a variety of upstream and downstream activities in countries such as Chile, Argentina, Ecuador and Egypt.  In Egypt, Enap Sipetrol currently operates in the Western Desert with the East Ras Qattara concession. The concession has 7 fields Shahd, Shahd SE, Ghard, Rana, Al Zahra, Diaa, and Shebl, with production temporary halting at the Rana Field. The peak production of the concession has reached 27,000b/d that are all being transported on a daily basis to Petroshahd receiving facilities in Qarun Petroleum Company base on Wahat road located 95 km away from Shahd SE and to Pipeline Petroleum Company (PPC) shipping destination located 208 km away from ERQ field.

“The East Ras Qattara concession was 5,916 square kilometers, located in the northern part of the Western Desert. The concession encompasses three main geological provinces, including the Zebeida High in the north, the East Tiba Half Graben in the center and finally the Kattaniya Inversion in the southern part of the block. The far Northwestern corner of the block covers the eastern extension of the Alamein Basin” said Eng. Shanhory to EOG.

Enap Sipetrol realized that using trucks to transport their production from their fields to the storage facilities is costly and above all not safe “the count of loads (trips between the production & shipping stations) exceeded 100 trips per day”. And given the nature of the [off-road] streets, those trucks and their drivers were subjected to accidents, oil spills, etc. and that threatened our QHSE policies. That’s when the Petroshahd pipeline came in to play” said Eng. Sayed Rezk, Enap Sipetrol General Manager to EOG.

With their recent application of the Petroshahd Crude Oil Pipeline, Enap Sipetrol was able to achieve what many couldn’t; a safer, less time and less money consuming way that would guarantee a safe transport of their fields’ production.

The pipeline is 10 inches in diameter, and it is 84km long, that extends from the Shahd SE field, which is the highest producing field with around 8,000b/d, to Petroshahd receiving facilities in Qarun Petroleum Company base on Wahat road. It’s also buried 2 meters deep into the ground.

There are future plans to connect the Al-Zahraa field to the pipeline “in order for the pipeline to connect both the Shahd SE field and the Petroshahd receiving facilities in Qarun, it had to pass right next to the Zahraa field, so it was decided to construct a pumping station in the field so that it can be used to pump Al Zahraa crude oil “Currently transferred by internal trucking (3 trucks per day) to pumping station in Shahd SE, using such tie-in point will achieve Zero trucking in ERQ field.” explained Eng. Shanhory.

The main productive zones in Enap Sipetrol’s ERQ concession are the Upper and Lower-Bahariya reservoirs. A couple of years ago; Enap Sipetrol has successfully explored a deeper Jurassic target; Wadi Natrun Reservoir, and achieved a gas condensate discovery from such target for the first time through the Western Desert which opens the door for all neighboring companies for a new potential was not seen before.

On the other hand, engineers and G&G teams at Enap Sipetrol have prepared an aggressive exploration and development programs to explore and confirm such new Jurassic potential and develop the currently producing Bahariya sands added Eng. Shanhory.

In 2004 Enap Sipetrol acquired the ERQ block. The area contained 15 dry holes previously drilled by a variety of international oil companies.  It was initially thought that the ERQ area was outside the hydrocarbon fairway due to the absence of the mature source basin. However, geological studies concluded that the complexity of the existing structure was to blame for previous failures. In late 2005 Enap Sipetrol conducted its first 1500 km2 3D seismic program. Shortly thereafter, Enap Sipetrol commenced exploration and drilling on three successive oil fields that achieved a 100% success ratio.

Mohamed Ismail, Engineering Maanager at Enap Sipetrol stated to EOG 3 that the record-breaking production in the ERQ, estimated back then at 27,000 b/d, was achieved by stringent execution of field development plans and reservoir management.  He added that Enap Sipetrol manages its reservoirs by adhering to optimal production schemes in all its producing wells.

In 2007, early production commenced with the Shad, Ghard and Rana wells, producing around 1,000 barrels per day. In 2008, permanent facilities were constructed in the Shahd and Ghard fields and production with peak production of 3.4 Mbpd and total production reached 667.9 MBBL by the end of 2008. However, Enap Sipetrol faced a dilemma when it came to shipping what they were producing.

Western Desert concessions are not like other concessions in Egypt where pipelines and shipping lanes are readily available, instead oil must be trucked far distances or agreements have to be made between companies to share pipelines and facilities like those Enap Sipetrol has held with Apache and Qarun Company to ship oil through their facilities. With Petroshahd’s 84 KM Pipeline on service; ERQ concession became a central point for crude oil shipping in the Western Desert and Enap Sipetrol has switched sides from being only sharing to be offering opportunities for others to share.