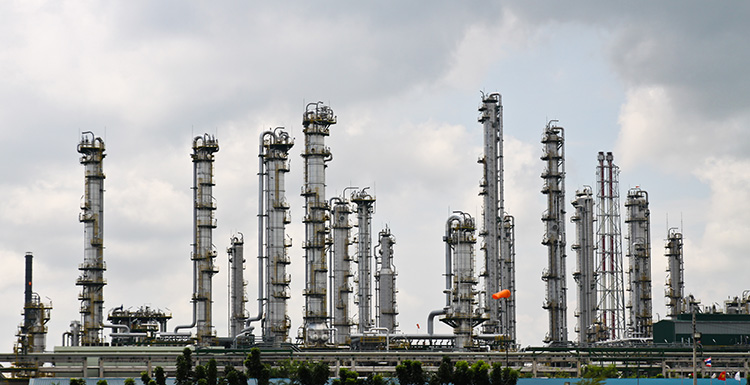 The risks of failure involved in chemical processes cause the petrochemical industry to be relatively averse to innovation. Yet, as the sector corresponds to 3% of Egypt’s gross domestic product (GDP), as well as directly and indirectly impacts other sectors of the economy, the petrochemical sector requires the most up-to-date technology to increase production and meet growing domestic demand.

In line with the investments in the oil and gas sector, the government has gradually developed the petrochemical sector over the past few years, paving the way for market stability and higher revenues.

In 2002, the government launched a 20-year master plan to improve Egypt’s petrochemicals industry. It aimed to increase its annual production capacity by 15 million tons. The state-owned Egyptian Petrochemicals Holding Company (ECHEM) expected the industry’s expansion to generate annual revenues of $15 billion and create 100,000 direct and indirect jobs. The long-term upgrade is projected to require $20 billion in investments. The funds are for the construction of 14 petrochemical complexes with 50 production units in 24 projects.

The plan was divided into three phases. The first one ran between 2002 and 2008 and generated as much as $6 billion in investments. It resulted in five fully-operational facilities for the production of alkyl, gasoline, polypropylene, propylene, ammonia, and polystyrene. The second phase, which garnered $7 billion of investments, ran from 2008 to 2015 and included the production of purified terephthalic acid, polyester, and latex. In addition, the phase included the development of aromatics and olefins.

The third phase is ongoing and is expected to attract another $7 billion in investments between 2015 and 2022. These investments are to be directed to the construction of an additional olefin complex, a second propylene and polypropylene complex, and the production, among other products, of vinyl and detergents.

In 2016, ECHEM released an official report indicating that the master plan’s efforts had resulted in a 30% increase in production and a 20% increase in sales during fiscal year (FY) 2015/2016. The company further announced the inauguration of two projects under the master plan during FY 2015/2016: Misr Fertilizers Production Company (MOPCO) and the Egyptian Ethylene & Derivatives Company (ETHYDCO).

MOPCO was established with the purpose of producing ammonia and urea. Ammonia is produced to facilitate  urea production—primarily intended for export. The surplus of both products would be directed to the local market. The plan calls for an annual capacity of 1.38 million tons of urea and an annual surplus of 80,000 tons of ammonia. MOPCO is located in the Damietta Free Zone and received almost $2 million in investments— 70.97% from Egypt and 29.03% from international sources. In June 2016, MOPCO’s annual urea production reached 350,000 tons.

Meanwhile, ETHYDCO was launched to produce ethylene and other derivatives from an ethane/propane mixture produced by the Egyptian Natural Gas Company (GASCO). The project has a proposed annual capacity of 460,000 tons of ethylene, 400,000 tons of polyethylene, and 20,000 tons of butadiene derivatives. Nearly $2 million have been invested in the project. The funds for ETHYDCO were all raised domestically.

ECHEM announced at least five new ventures under the master plan in its FY 2015/2016 official report. The Resins & MDF Wood Panels Project, set to be launched in 2018, aims to produce adhesive-based chemicals & medium-density-fibreboard (MDF) wood panels using agricultural residues as a feedstock. With feedstock sufficient for 7,000 tons of urea formaldehyde (SUPSC) and 120,000 tons of rice straw per year, the plant is expected to have an annual capacity of 120,000 cubic meters of MDF Wood Panels and 15,000 tons of adhesive-based chemicals. Production will be directed to meet local market demands and replace imports. ECHEM expects as much as $110 million in investments.

Two projects are to be launched in 2019, according to ECHEM. The Ammonium Sulfate Fertilizer Project aims to produce ammonium sulfate fertilizer. It will utilize ammonia from Alexandria National Refine & Petrochemical (ANRPC) as feedstock. The plant will permit the expansion of the projects of the Suez Petroleum Services Company (SUPSC). The project is expected to garner as much as $145 million in investments. Using 350,000 tons of sulfuric acid and 160,000 tons of ammonia, the project is projected to have an annual production capacity of  480,000 tons of ammonium sulfate. Meanwhile, the Formaldehyde & Derivatives Project aims to produce formaldehyde and other derivatives by utilizing 30,000 tons of METANEX’s methanol and 10,000 tons of MOPCO’s urea per year as feedstock. With a total investment cost of $30 million, the plant’s annual capacity is expected to reach 60,000 tons of formaldehyde and 40,000 tons urea formaldehyde (UFC-85 & UFC-65).

In 2020, the Styrene Production Project is expected to be launched. With $593 million in investments, it aims to produce 300,000 tons of styrene per year. The styrene will be used to bolster polystyrene production and replace imports—excess styrene will be dedicated for export. ECHEM further announced the Propylene and Derivatives Project to be initiated in 2021. The project aims to produce polypropylene by utilizing 590,000 tons of propane from GASCO per year as feedstock. The plant’s annual capacity is designed to reach 470,000 tons of propylene and 450,000 tons of polypropylene. Production from the plant will serve local market demands for polypropylene while exporting the surplus. Its output will primarily be used by Sidi Kerir Petrochemicals (Sidpec).

Besides the obvious economic benefits from the completion of these projects, ECHEM expects to attract international joint-ventures investors, build value from downstream derivatives, and boost the country’s investment rating.

In addition to the projects overseen by ECHEM, the Egyptian government has announced other new petrochemical schemes, such as the construction of a petrochemical plant in the Suez Canal Economic Zone. The project aims to use around 4 million tons of naphtha to produce as much as 2.7 million tons of petrochemical products, such as gasoline, ammonia, p-xylene, styrene, polypropylene, and polyethylene, the Minister of Petroleum and Mineral Resources, Tarek El-Molla, stated in September. The plan is part of an overarching $20 billion investment project that is comprised of 30 separate projects in the Suez corridor. As much as $6.8 billion will be injected in this project alone over a period of up to five years, El-Molla said, noting that the new complex is expected to cover local market needs and provide raw material for other petrochemical schemes.

In June, Egypt’s Carbon Holdings Company announced it will begin the construction of its Tahrir Petrochemicals Project by June 2018. The complex is to be located within the Ain Sokhna Industrial Zone and has an investment cost of $10.6 billion. Tahrir Petrochemicals will be the largest petrochemical investment in the country, according to the company’s CEO, Basil El Baz. Construction is estimated to take up to five years. Its production of raw materials is designed to cover the industrial sector’s needs. El Baz further believes that continuous output growth will stimulate domestic and international manufacturing firms to invest closer to the project’s production facilities.

Egypt’s plans for the petroleum industry are sustained by five pillars, according to the Ministry of Petroleum. These pillars are: increasing crude oil exploration and production, securing its petroleum products and natural gases needs, expanding to the natural gas grid to houses and factories, transforming Egypt into a regional hub for energy, and expanding the petrochemical industry to increase product value, Arab Finance reported.

The Ministry of Petroleum has developed assertive goals to secure the raw material necessary to prosecute its plans for the petrochemical sector. Increasing Egypt’s capacity to produce raw materials through the construction of new petrochemical facilities will serve as a significant asset to attract multinationals and incentivize them to start manufacturing in Egypt. “Why haven’t all these foreign multinationals that keep making visits to Egypt every month started manufacturing? What it comes down to is that there are no raw materials,” Egypt Today quoted  El Baz as saying. The ministry’s target of improving the supply of raw materials is to encourage investment, create jobs, and activate an integration policy between the oil companies, El Molla told the media.

Developing the industry will also directly produce good job opportunities for both junior and senior oil and gas engineers and technicians and a wide range of indirect job opportunities. Tahrir Petrochemicals Complex alone, for instance, will create up to 20,000 jobs. “Approximately 20,000 Egyptians will be directly employed during the peak construction phase with approximately 3,000 engineers and technicians being employed during the operations phase,” El Baz said. These opportunities are critical to Egyptian young people who have been severely harmed by the unemployment rates in the country.

Increasing consumption of petroleum products impacts Egypt’s trade deficit, requiring the utilization of limited budgetary resources to cover imports. In 2015, the production of plastic materials covered only 28% of the 2.22 million tons of plastic consumed domestically. During the first nine months of FY 2016/2017, the government spent $7 billion on the import of petroleum products, up from $6.2 billion during the same time period in FY 2015/2016. However, although consumption is increasing at an annual growth rate of 6%, the new petrochemical investments are projected to supply a larger share of the country’s domestic demand. During FY 2015/2016, production of petrochemicals and derivative products reached 35.5 million tons, as opposed to 31.2 million tons in the previous year. On the long-term, investments in petrochemicals are expected to alleviate the economic burden caused by imports, especially after the flotation of the Egyptian pound.

The devaluation of the Egyptian pound posed an extra challenge to the government’s investment plan. As materials for construction are mostly imported, building new petrochemical plants became more expensive, especially with rising inflation. In order to remediate the price increase, Egypt has taken measures to attract foreign investments. Besides a new law to regulate and facilitate the influx of natural gas, which brings the oil and gas sector into the spotlight, the government further approved new legislation to simplify the bureaucratic process for investors and offer tax breaks for investments in underdeveloped regions and select industries. These higher costs, however, have forced the government to raise addition funds through loans and new revenue sources in order to finance the petrochemical master plan. The country has received important deals—such as the three-year agreement with the International Monetary Fund (IMF) to receive a $12 billion loan—that are linked to subsidy reductions and the tax increases.