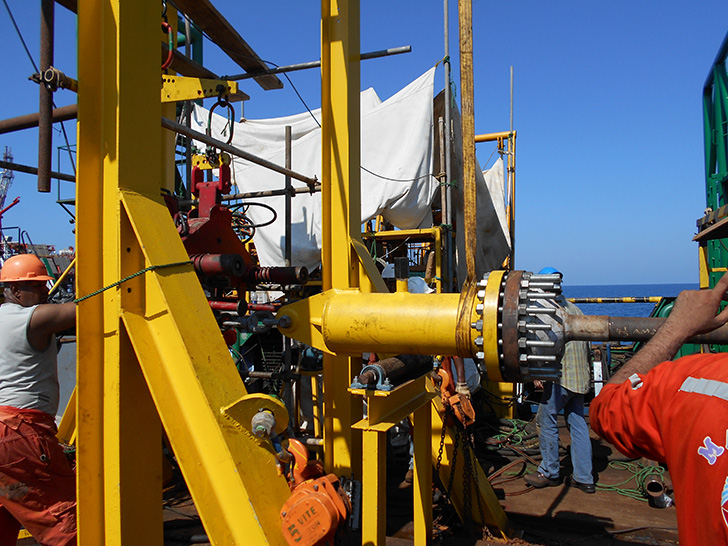 In line with the efforts to improve cost-savings by keeping production costs at minimum levels, Petrobel Management took innovative steps to restore its damaged pipelines. Instead of the time-demanding works traditionally applied in restoration projects, the company carried extensive studies to develop a more time and cost effective maneuver.

“We needed to look for alternative solutions, otherwise some pipelines would go out of service until allocating the required budgets,” Petrobel’s Operations Staff explained to Egypt Oil&Gas.

Pipelines’ quality deteriorates by time, even with constant supervision and maintenance. Due to subjecting factors, such as corrosion from the products carried, and geographical and environmental threats, all pipelines eventually lose their efficiency. According to a study made by the Canadian Energy Pipeline Association (CEPA) published in 2015, pipelines have an expiration date, and oil and gas companies should think of unconventional ways to be able to restore them and achieve highest performance.

Traditional restoration projects usually include laying new sections of damaged pipelines using standard line pipes deployed from a specially equipped vessel called Pipe Lay Barge. Such campaign requires long lead-time for new material delivery, finding the lay barge suitable for the job, in addition to the expensive rate for such vessel and the huge cost for mobilization and demobilization.

Instead, following Petrobel’s research, the company came up with the idea of fixing damaged facilities by using surplus drilling-pipes material already available on stock. Maridive Offshore Projects (MOP), an Egyptian offshore contractor with over 30 years of proven record of accomplishment, worked in partnership with Petrobel as consultant of the project.

Maridive’s Managing Director, Mohamed Nadim, explained that the collapse in oil prices has led to severe cutbacks in management budgets across the global oil and gas industry, and the real predicament for IOC’s & NOC’s alike is how to scale back spending whilst ensuring the highest level of safety, efficiency and productivity.

“At MOP we saw this as an opportunity rather than a problem. We transformed our operating model from being a service provider to a fully-fledged solutions provider. We learned that working closely with our partners enables us to breakdown complex problems and translate them into simple solutions. There lies the core of optimization and innovation. This is where we saw the greatest value proposition,” Nadim added. Maridive has been working in partnership with Petrobel for over 20 years.

The new scheme initially presented a considerable amount of challenges, such as overcoming the relatively high operating conditions of sea lines, finding cost-effective alternatives for installation, as well as establishing the lines’ pre-commissioning in a way that meets the operating parameters.

To fulfill the project’s requirements, MOP considered the application of the offshore applicable Codes & Standards, such as DNV-OS-F101 and IMCA, and started a technical study that included material mechanical testing and threaded joints testing under the same values extracted from comprehensive laying analysis performed by the Maridive technical office.

Based on the technical study and the laying parameters, MOP utilized its Maridive-232 vessel, a DPII DSV construction vessel equipped with diving station, in addition to an 80-tons crane. The company also looked at enough deck space to accommodate the line pipe material, which should be wide enough to construct a customized firing line suitable for the operation.

MOP’s General Manager, Said Mostafa Ashour, stated, “The project was a bold maneuver. Our company is glad to be part of this innovative scheme that adds up to our successful cooperation with Petrobel.”

The pipelines were laid in several campaigns and the lines were connected to existing offshore platforms using conventional subsea spools. They were further tested for the operating conditions, which range from 35 to 100 bars, and for the usage of different products, such as gas, water injection, and crude oil.

The project’s requirements were successfully met and Petrobel collected outstanding results, as its lines have been working for over a year without any repercussions or issues and the project led to millions of dollars of cost-savings in the company’s operations.

Petrobel’s Former Assistant Chairman for Projects, Saleh Mansour, stated, “We believe that our achievement was the product of team work between all parties and it resulted in cost-savings for Petrobel. We sure do hope that one day we can share our experience with our sister companies and that they would adopt this solution as their own.”