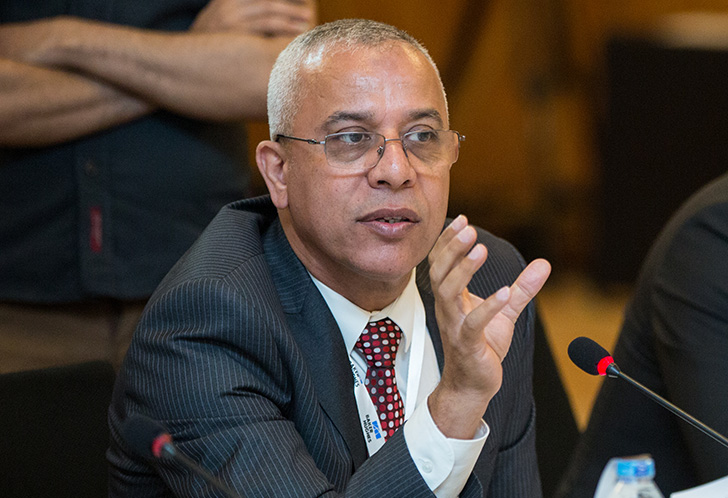 ENAP Sipetrol, is a subsidiary of the Chilean State-owned ENAP which is a multinational entity engaging in a variety of activities related to both upstream and downstream operations in several countries such as Chile, Argentina, Ecuador and Egypt.  Enap Sipetrol has been in Egypt for more than 14 years with investments in several concessions in the Western Desert, North Sinai & offshore Mediterranean. Currently, it operates only East Ras Qattara Concession in the Western Desert with 50.5% participation and 49.5% for Kuwait Energy Egypt (KEE).

In 2004, Sipetrol acquired the ERQ block as a sole bidder where no one has considered such area as valuable at the time where 15 dry unsuccessful wells been drilled in the concession by several international oil companies whom considered the ERQ area is outside the hydrocarbon pathway due to the absence of the mature source basin.  After several special geological studies made and dry hole analysis, ending up with a conclusion that the main reason of failure of drilled wells was complexity of the existing structure. Late 2005, Sipetrol conducted its first 1,500 km2 of 3D seismic program followed by drilling and exploring three successive oil fields with 100% success ratio; namely Shahd, Ghard & Rana and followed by other discoveries for Al Zahraa, Shahd SE, Shebl and Diaa.

By the end of 2007; Sipetrol have managed to accomplish its Exploration commitment with EGPC, which was set to be delivered in 7 years’ time with such three remarkable oil discoveries, producing around 1,000 barrels per day. Eng. Rezk do believe that they could have achieved it in less time, except for the fact that the paper work took longer than expected to be signed. “If the paperwork didn’t take as much time as it did, we could have set a record as the first company to explore, drill, and produce three wells in less than 6 months and establish a joined venture a year after” added Eng. Rezk.

Sipetrol has witnessed immense production growth in the last six years after drilling several wells in the area and acquiring more than 9 Development Leases.  In 2008, production was 2,925 BOPD to reach a peak production record of 27,000 BOPD in December 2014 where Sipetrol has achieved a gas condensate discovery from the Jurassic Wadi El Natrun sand for the first time in the Egyptian Western Desert which opens the door for a new potential reservoir that was unseen before. Today daily production exceeds 17,000 BOPD and accumulated production has reached more than 45 MMBBL in spite of suspending the drilling activities for more than 28 months till getting the necessary approvals.

Enap Sipetrol had a clear vision that their production levels will increase massively, so in 2008, they decided to sign with Apache to build the PetroShahd receiving facilities in Qarun Petroleum Company Base on Wahat Road.

The Qarun receiving station can hold up to 140,000 barrels before distribution and all the processes are made under the supervision of Qarun Petroleum. “The crude oil that we receive at PetroShahd receiving facilities in Qarun base is that of high quality, it’s what we call ‘on-Spec’ with an API over 40” added Eng. Rezk.

But as production rate increased Sipetrol faced the dilemma of transporting crude oil across the desert, and that’s when PetroShahd pipeline was planned to be built “by the end of 2014, our production has peaked to be 27,000 BOPD and back then, we used trucks to transport our crude oil production from the wells to PetroShahd receiving facilities in Qarun base, but we were not satisfied with that process so we thought of construction of a transport pipeline as an alternative” explained Eng. Rezk.

The main and most important reason why ENAP Sipetrol decided to build the pipeline was to eliminate all Health and Safety hazards, in addition that ENAP main KPI strategy towards the environment is to comply with the industry’s best practices and the Egyptian regulations.

Eng. Rezk believes in ERQ value which is managed by expert technical team with continuous development in the infrastructure serving the operations with optimum lifting costs of ± 2.4 $/bbl that is considered the lowest in the Western Desert area.

Enap Sipetrol has aggressive plans to drill in the area believing that the concession has huge potential that is yet to be explored that will help them produce more than double of what they are producing at the moment.

Mr. Rezk highlighted that the importance of ENAP Sipetrol’s Gas/Condensate discovery in December 2014 will certainly add importance to the overall upstream portfolio of Sipetrol Egypt and contribute in country resources for gas supplies. In the meantime, full assessment for gas potentiality is undergoing using a high resolution seismic data in order to detect future drilling locations that will confirm the potentiality of the gas in the area.

In parallel, Enap Sipetrol is undergoing comprehensive studies to evaluate the optimum gas facilities required for the gas project, including a gas pipeline that will extend from ERQ Concession to tie in with GASCO 32” gas pipeline to Al-Amreya gas complex in Alexandria, with length of 77 km and 12 inch size.

Although the international oil prices have fallen rapidly from second half of 2015, and outlook for recovery is still unclear especially after currency floatation.

ENAP Sipetrol still believe that crude oil & natural gas resources will always be a vital and primary sources of energy in the world and Enap is a state owned Chilean company opened to the world with short-medium to long term business vision. During Feb 2017 Enap CEO Mr. Marcello Tokman together with Enap E&P CEO Mr. Hesketh Streeter were present in Egypt where they have visited H.E. Egyptian Petroleum Minister, Eng. Tarek El Molla with the objective of having close business insight and strengthen the presence of Enap in the country. The meeting has been covered by the media where it has positively marked up the effective relationship between EGPC and ENAP Sipetrol with mutual understanding for growth and maximizing the economic and financial value of Sipetrol in Egypt.

Finally, Eng. Rezk is extremely optimistic of Sipetrol future and has an optimistic vision about the industry in the near future under the current management regime of Mr. President El Sisi and His Delegates.