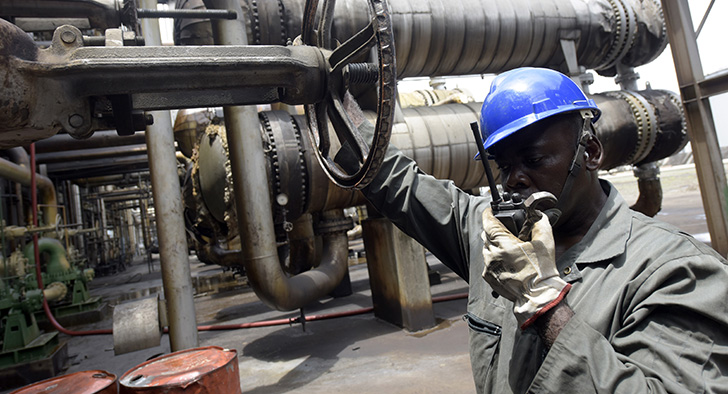 The drastic slump in global oil prices and the continual militant attacks on Nigeria’s petroleum facilities rendered the market feeble and brought about financial problems for the country’s joint ventures. The situation had been grave even at a time when a lot of revenue was being made from crude oil as a result of high production and prices. Now that the crude oil production in Nigeria is at its lowest, the government has recently realized the importance of bringing up a solution for funding its oil sector.

Nigeria has been recently taking into consideration a possibility to convert joint ventures into Incorporated Joint Ventures, IJVs, in efforts to resolve the huge funding gaps between the government and the international oil companies.

It is a truth that the lack of or inadequacy of finances is a big challenge for the realization of full potentials of the joint ventures. A source of fund flow can help impact positively the oil sector and the country’s entire economy. It, additionally, gets the finance burden off the government’s shoulder.

Former Special Advisor to the late President Umary Yar’Adua and former President Olusegun Obasanjo, Emmanuel Egbogah had previously proposed the conversion of all Joint Ventures (JVs) into Incorporated Joint Ventures (IJVs), which can obtain loans and resort to the capital market for funding. But IJVs were removed from the petroleum industry bill submitted to the National Assembly by the administration of former President, Goodluck Jonathan, in 2012. But in late August 2016, the administration of Nigerian President, Muhammadu Buhari, took a different approach. It has reintroduced the IJVs in the revised petroleum industry bill. The question stands as: What benefits do Incorporated Joint Ventures have for the country?

A Nigeria’s oil sector has been witnessing a period of drawbacks in the past years. Turning the existing joint ventures into incorporated business ventures can independently source funds from the open market for their operations. That way, the companies can operate without having to look into the government for financing. Thus, the federal government will be freed from directly funding the joint ventures from its dwindling finances, which will lessen the burden off Nigeria’s economy. Nonetheless, the government will not be left out from the processes in the oil industry. The suggested new approach implies that the government will be able to concern itself with regulating and supervising operations of the Incorporated Joint Ventures as well as enforcement of laws, regulations, and established standards.

In addition, incorporating the joint ventures will not have any adverse implications on the ownership of the businesses, according to the Guardian’s article – Nigeria’s Oil Industry and a Better Funding Alternative, published in August 2016. As proposed, the parties in the existing joint ventures will retain ownership of the new companies in the proportion to their existing shareholding. This means that the federal government will still retain the lion share of 55-60%, while the oil companies will hold 40-45%.

IJVs approach may generate further advantages. Incorporating the already existing joint ventures will bring in more transparency and accountability in its management, especially as providers of funds will demand good corporate governance and best practices in the handling of affairs of the companies. In other words, an incorporated joint venture that fails to meet market requirements and demands will suffer the consequences on its own if it comes short of funds.

By incorporating the joint ventures, the government will not be resorted to for funding the cash calls, which is not the case in the Nigerian joint venture business now. There is no doubt that the Nigerian National Oil Company (NNPC) would be the primary benefactor for  getting funding responsibilities off its shoulder by turning JVs into IJVs, especially that the NNPC has long failed to meet financial demands. The Guardian explained that the NNPC was indebted to Shell, Chevron, Agip, Mobil, Total, and Pan Ocean, its six joint venture partners. In January 2015, the cash call hit a value of $5 billion. At the close of the year 2015, joint ventures funding had gulped more than 87% of the total proceeds the NNPC made from its export crude oil and gas trade. As of April 2016, NNPC’s indebtedness to its JV partners stood at $7 billion. Therefore, adopting the Incorporated Joint Venture model can shift the current situation of the Nigerian oil market into profitability and resolve the cash call issues that the government has long fallen short of. This will, additionally permit exploration and production activities to reach their real potentials.

Nigerian Energy Business Analyst and Member at Energy Institute, Afolabi Okunowo, argued that if Nigeria incorporated its joint ventures, several benefits would occur. Incorporated Joint Ventures are registered with the Corporate Affairs Commission, which means the IJVs cannot be subject to any legal terminations. In addition, the IJV model ensures transparency and accountability. In essence, Okunowo said in his analysis – Incorporating Joint Ventures, a Better Funding Alternative, published in late June 2016: “Incorporation permits more efficient operation by removing the layer of supervision done by National Petroleum Investment Management Services (NAPIMS).” It will also liberate JV partners from any funding uncertainties that frequently occur from the government as they are able to turn to other options such as the capital market.

Funding the industry is as important as capital needs are to entrepreneurs and businesses. Yet, transforming joint ventures into IJVs is a process that holds within several procedures that the Nigerian Development Petroleum Company (NPDC) and joint venture partners need to adopt. In his analysis – Two Options for Converting NPDC’s UnIncorporated Joint Ventures to Incorporated Joint Ventures, published in October 2015, Nigerian Energy Lawyer and Odujinrin & Adefulu’s Energy Practice Team Partner, Adeoye Adefulu, introduced two options to this process. The first one is the reverse takeover and the second is the company transfer.

Adefulu explained that the reverse takeover option is not a typical RTO in its technical sense. In other words, it is not like the RTO where a private company takes over a dormant public company. Yet under this structure, the National Oil Company transfers its rights in the underlying Oil Mining Leases, OML, in exchange for shares in the indigenous company. The indigenous company would be required to substantially increase its share capital in order to allot the requisite shares to NPDC. This option, therefore, requires a thorough evaluation of the assets and the liabilities of the indigenous company as well as that of NPDC’s interest in order to determine the appropriate level of shareholding to be allocated.

This process is likely to lead to the situation in which NPDC would hold majority shares in the indigenous companies (hence the RTO) and where the shareholdings of the companies would be relatively fragmented. NPDC would be the largest shareholder by a significant margin. This may raise concerns from the existing shareholders in terms of their ability to influence the operations of the new entity. A number of these concerns may be dealt with by putting in place a robust shareholders’ agreement, which addresses voting rights, pass mark issues, and other minority protection mechanisms.

NPDC may also be concerned that at the end of this process, it would have only transferred assets and not achieved the capacity building objectives of this exercise. This concern may be ameliorated by allowing the process to accommodate the transfer of staff.

Both the RTO and the company transfer options hold within some regulatory concerns that should be taken into account. The transfer of assets from NPDC would require the consent of the Oil Minister, which is unlikely to be a problem, given that this initiative is being driven by the government. The process may also require the approval of the Securities and Exchange Commission as it is likely to fall under the mergers and acquisitions rules of the Investments and Securities Act. However, the required increase in share capital by the indigenous companies would incur fees at the Corporate Affairs Commission and stamp duty fees. Banks and other lenders to the indigenous companies as well as those of the already existing shareholders may also need to approve the transaction under the terms of their existing loan arrangements.

In getting to realize the conversion, there are likely to be some challenges. First is getting the government to situate the suggestion in proper perspective given the realities that the nation is currently facing.

Second is mustering the needed political will to cause the needed incorporation of the joint ventures. In this case, the consent of the minister would be likely guaranteed. Incidentally, this is one change that should have taken place a long time ago. In that case, the government would have received much needed assistance in freeing its financial resources and deploying them to other needy areas in the socio-economic space.

Third, the subsisting laws will need to be looked into with a vision to affect amendments where necessary, so that all legal bottlenecks are removed. In this way, consideration must be given to the role that the legislature will play to ensure a smooth transition from joint ventures to Incorporated Joint Ventures. Even, in view of the fact that the lawmakers may perceive the move to result in limiting the scope of their oversight functions and accompanying benefits, it will be important to develop and implement effective strategies towards obtaining both their buy-in and their support.

Fourth, the challenge is assuring that the incorporated companies can easily source funds via the capital market. There will, most probably, be the issue of availability and adequacy of experienced human capital within the country to successfully manage the Incorporated Joint Ventures.

Finally, the government will need to engage the joint ventures partners in necessary negotiations if it seriously considers embarking upon incorporating the joint ventures. There is no doubt, however, that the oil companies will appreciate the essence of the incorporation and support it, given their usual unpalatable experience with the government in funding cash calls.

Nigeria needs workable and positively impactful ideas that could push the oil sector forward. The country is in dire need of credible suggestions that can turn around the current low productivity and its associated socio-economic challenges, rather than criticisms.

The proposal for the incorporation of the joint ventures has been implemented for now, but it still requires further considerations. The government should, therefore, work closely with oil market experts to assess the efficiency of the IJVs and conduct a comparison between the oil market performance before and after the conversions. While further evaluation thereof should quickly be embarked upon, it is imperative that a detailed framework for its implementation be worked out. The earlier a decision is made, the better for the oil and gas sector and the Nigerian national economy.