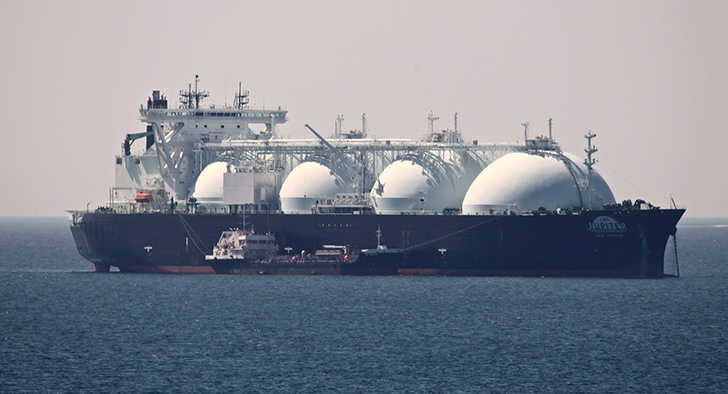 Tankers cruising the Mediterranean Sea have become a dilemma for shippers and oil and gas producers alike. They run on heavy fuel and marine diesel oil. Yet, it is liquefied natural gas (LNG) that is a safest bet for an environmentally friendly future and economic prospect in the region. Although initial conversion of ships to LNG requires construction of a complex bunkering infrastructure to power LNG ships in years to come, it makes for a sound economic investment, despite the challenge that will likely create for the oil industry.

Experts say that LNG is not only more stable and cheaper than other fuel sources, but engines that run on LNG fuel are 8%-9% more efficient. Until now, however, LNG is still not the main fuel used by ships in the Mediterranean Sea. The reason being that there is a major lack of LNG bunkering infrastructure and costs associated with equipping fleets to shift to liquefied gas require massive financial input. Some experts also indicate that other structural, technological, and legal issues hamper the process of introducing LNG as the main fuel source for maritime transportation.

The Scandinavian and the Baltic nations were first who enthusiastically embraced the LNG shift as the most viable option in Europe. Pilot projects in northern Europe have been developed with strong government support, while taking advantage of infrastructure that was already in place. Favorable environmental regulations have also helped to speed up the fuel conversion. Finally, low costs of LNG, compared to other variants of bunkering fuels, which are also compliant with the ECA Emission Control Areas (ECA) norms in Europe and North America, have skyrocketed demand for this fuel as a profitable investment commodity.

The Northern European success story unveils a huge potential of LNG fuel for shippers in other maritime regions. This option may become a new solution to industrial and domestic gas demand in the Mediterranean countries where there has been a growing demand for fuel alternatives in the last decade, in particular in subregions that are disconnected from national grids. Spain was the country in the Western Mediterranean that had the first experience with LNG bunkering schemes that supports viability of this fuel strategy.

Chances to introduce LNG fuelled cargo ships may become even more real as they come hand in hand with economic prospects for other sectors of the maritime transportation, mainly tourism.

As the first steps in the construction of the Western Mediterranean LNG bunkering infrastructure have come to light, Madrid has set for itself a target to converse from heavy to LNG fuel in line with a plan to diversify fuel sources. The Spanish Senate sees LNG as a realistic and viable source of maritime fuel for the future. Spain thus came to stand in the frontline of the initiative to implement LNG bunkering strategy in the Western Mediterranean waters, inspiring others in the eastern region to follow suit.

While European countries receive 86% of their gas through pipelines and the remaining 14% arrive in the form of LNG aboard tankers, Spain, in contrast, gains 53% of natural gas via pipelines and as much as 47% arrive as LNG by sea. What is more, the Spanish newspaper, Cinco Días, informed, the Iberian Peninsula receives LNG from 11 different destinations, including Algeria (55%), France (13%), or the Gulf nations (9%). Spanish government’s heavy investment in LNG imports thus bones well for country’s economic strategy to diversify its fuel sources. Unlike the rest of European countries that rely almost exclusively on Russian gas supplies, the Spanish model of LNG fuel prioritization may prove viable for other EU members in the future or for countries from the other side of the Mediterranean.

Spain operates 7 out of 22 regasification centers in Europe, which is 36.5% of the continent’s LNG storage capacity and 90% of tanker loading capacity. By 2025, 11 Spanish ports are required to build up LNG cargo infrastructure, according to a national plan.

Companies such as Enagas and Gas Natural have been involved in cooperation with state-controlled entities such as the Spanish State’s Ports. In February 2015, Spanish Port of Huelva announced that it was considering the development of LNG bunkering facilities, as well as other infrastructure improvements at the port. The bunkering facilities would be part of a proposed gas export terminal.

Meanwhile, the Gibraltar Port Authority (GPA) also issued an annual performance review, which shows that the total number of ships calling for bunkers at the port rose already during 2015. “Whilst [still in] early days, this trend reinforces Gibraltar’s position as the Mediterranean’s leading bunkering port and its resilience as a centre of maritime excellence,” said Bob Sanguinetti, CEO and Captain of the Port. In October 2015, Shell Gas and Power entered in negotiations with GPA to supply LNG to the western Mediterranean region, making Gibraltar into an LNG bunkering hub on the Sea.

It is estimated that the number of LNG tankers in Spanish ports that had undergone the so called ‘retrofitting process’ – engine and fuel modifications to run on gas – will increase to 46% by 2045, as a study conducted by Deloitte, the auditory firm, predicted. This change of trend is boosted by government’s financial incentives. Currently, there is a 50% reduction in port charges for ships using LNG, and some industry sources suggest that the Spanish government could consider a reduction in tolls charged on regasification of ships.

It appears that the success of LNG bunkering in the entire Mediterranean will rest on incentives that will help to construct necessary infrastructures, and modify vessel technological capacity as well as on environmental regulations.

The imperative need to invest in LNG conversion will not magic up the change on its own. LNG fuel success depends on ensuring that there are sufficient LNG bunkers available for tankers and ships so that those involved can rest assured that the bunkering facilities are well developed within a reasonable distance and with sufficient capacity, as their vessels often ply in the far flung corners of the world and are dependent on supportive structures.

Major investments are therefore needed to achieve required maritime sector transformation. Incentives in the form of tax credits should be expanded in order to make the numbers work out.

As LNG prices remain linked to oil’s fortunes, industry sources insist that the current global oil price slump can be exploited. Current global prices are the result of market surplus, and the situation is not due to change anytime soon. Oil supply will continue to be buoyant in the short term for as long as OPEC, and particularly Saudi Arabia, believes that defending their market share is more important than controlling supply and thus underpinning weak energy prices.

Environmental regulations and multilateral cooperation may also be needed to realize the conversion and introduce LNG fuelled ships at a reasonable pace. “There is huge potential to adopt LNG bunkering in the Mediterranean, but whether this happens will depend on the scope of environmental regulations, costs and cross-regional support to jointly develop projects,” Francesco Campanale, Financial Planning and Control Manager at Offshore LNG Toscana, told Gas Intelligence, stressing further structural advantages of pursuing this path.

LNG bunkering infrastructure will prove efficient, as “a lot of countries are not connected by pipelines to the grid [and would therefore] benefit from these facilities,” Campanale added.  Although currently “the European Commission is [currently] much more focused on developing the north and most of the finance will be diverted there,” according to Campanale,” there needs to be more support from Europe” in the Mediterranean region too. The lack of LNG fuelling infrastructure in major bunkering destinations in the Western and Eastern Mediterranean and high investment cost for newly built LNG fuelled ships is hampering progress, according to data based on a market research published by the Transparency Market Research.

To date, merely some Offshore Support Vessels and Container Vessels have adopted LNG as a preferred marine fuel. Currently, 21.3% of orders for new LNG-consuming vessels are for containers ships, according to data available from the Boston Consulting Group. In Europe, 48 vessels currently operate on LNG, with another 29 under construction. The projections are that by 2020 there will be up to 1,000 LNG fuelled vessels in Europe.

Optimistic outlook stems also from the adopted framework of environmental regulations. If the International Maritime Organization (IMO) enforces the envisioned 0.5% sulpHur limit on ships globally as of January 2020, there will be an additional incentive for Mediterranean ship owners to invest in LNG as a bunker fuel. According to market forecasts, by 2030, approximately 32% of the global cargo fleet will be fuelled by LNG.

As offshore support vessels and coastal and inland ferries seem to call for a conversion to LNG fuel, LNG bunkering demand is increasing. This recent trend may help to further augment the growth of the market.

The use of LNG requires delicate and complex infrastructures also throughout the chain of production. Therefore, incentives must come in bulks.

Fred Olsen shipping company has been granted an $8.3 million EU fund to pay for the modification of one of its ship engines. The goal is to see how quickly it can begin to use LNG, but the process is complex. LNG requires a greater amount of storage space on ships, as a liter of LNG is equivalent to 0.6 liters of other liquid fuels. Moreover, its use requires a specially trained crew.

It takes usually one to three years to build a ship, depending on its specifications. Modern shipyard capacities are equipped for new vessel construction and possible conversion, along with facilities and equipment for LNG supply. But the surge in demand for LNG fuelled propulsion is greater than the shipyards are currently able to meet, as explained in an analysis by The Hellenic Ships News. It is likely that many builders will take advantage of the demand to hike prices. Nonetheless, the fact that LNG is 50% cheaper than its compliant alternative – low sulphur Marine Diesel Oil – implies that diesel fuelled ships will no longer be capable of withstanding LNG vessels in economic terms.

Furthermore, LNG fuelled tankers and ships can give economic promises to other sectors of the transportation industry, namely tourism.

One example for all is Meyer Werft. The company announced plans to build two new, next-generation cruise ships for Carnival’s Costa Cruises in Papenburg, Germany. They will be the world’s first cruise vessels to run on LNG power in port and at the sea, with each vessel exceeding 180,000 tons. They will accommodate a total capacity of 6,600 guests, making them the largest guest capacity cruise ships in the world.

The European Union requires all ports within the trans-European transport network to have LNG supply points by 2020. As can be expected, the proposal has generated heated debates. In order to achieve this objective, an initial European Cross Border project is underway, with the specific objective of introducing LNG as the main fuel for the shipping industry. This policy will likely serve to develop concepts and infrastructure within the Mediterranean region as well, while inspiring other non-EU countries in the sea region to follow suit one way or another.

Ship owners will likely accept the LNG conversion strategy if there is sufficient infrastructure, efficient supply chain, respective government support and LNG prices are low enough to justify the capital investment needed in new ships. Improvements will also be pushed forward through imposed strict regulations that are currently being formulated in line with the global climate change responsible policies.

Ultimately, the timeline and strength of environmental regulations will determine whether the LNG bunkering sector in the Mediterranean will progress as fast as in northern Europe, and lead to an overhaul transformation of the industry. Yet, a loss of residual fuel in favor of LNG may present a new challenge to the entire oil industry.