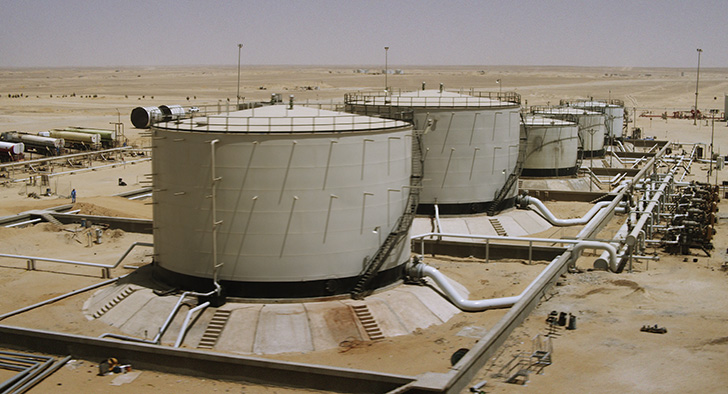 Tanmia Petroleum Company, under the supervision of Petrosannan Company, launched the Early Gas Production Facility Project at the AESE-6 Concession Area, in Alam El Shawish East, to boost daily gas output to around 20.8 million cubic feet per day, in addition to 800-900 billion barrels per day of condensate.

Petrosannan, a joint venture between the Egyptian General Petroleum Corporation (EGPC) and the Ukrainian Naftogaz, controls different areas within the Alam Al Shawish concession, while Tanmia Petroleum Company, the project’s contractor, is a young oil and gas fields development company fully owned by the Government of Egypt.

The Alam El Shawish East area, where the proposed activities have been progressing, is situated in the Egyptian Western Desert, between Shell’s Alam El Shawish West block and Apache’s prolific Abu Gharadig field. Naftogaz first signed a project for the extraction of hydrocarbons in the area in 2006. In 2009, the EGPC recognized a commercial discovery in Alam El Shawish East, which was a prerequisite for the creation of an operating company and commencing production.

Considering Egypt’s challenging energy shortages and the downturn in gas production – which turned the country into an importer of natural gas after experiencing a boom in exports – the project represents an extremely relevant step to boost the nation’s gas production and help remediate the disequilibrium in its trade balance.

As much as $12 million were invested in the Early Gas Production Facility Project. The project consisted of several stages. In the first, the companies aimed to complete the installation of dehydrated equipment and to pump only dry gases from the field’s X-area instead of the t-area.

The process included the extension of the main gas pipeline to X-area, the installation of the dehydration package, as well as the installation of a compressor to recover flared gases at Karima oil facility, which held around 2.5 million cubic feet per day. The operations were successfully completed within the period of four months.

In parallel to the investment in dehydrated equipment, another project was implemented to improve the infrastructure of the Alam El Shawish East area. The project’s contract was established between Naftogaz and the design contractor Al-Naft company, which is also controlled by the Ukrainian firm.

The Design Works for Permanent Facilities Project raised as much as $2.3 million of investments, and was divided in two different stages. The first one consisted of the Front End Engineering Design (FEED) works, which covered the basis of the design and the geological survey. The second one was projected to establish more detailed design works. Both stages were expected to be concluded within four months each.

In addition, the project also consisted of a FEED of internal flow lines between the field’s HG and AES-E6 stations, which included an oil pipeline of 19 kilometers of length and 6 inches of diameter, and another one with the same length and diameter for gas. Deloitte Engineering Company reviewed the FEED of the oil and gas pipelines work, as well as the FEED of the oil and gas stations work.

According to Naftogaz, the operational activities of the first phase of the project have been effectively completed since 2014. Following the FEED conclusion, the Detail Design works included in the second stage were supposed to start immediately. However, when the project was released, the budget of 2014/2015 did not include any item for permanent facilities, which happened to delay its second stage.

Petrosannan, the supervisor of the mentioned projects, and Naftogaz carried out many discussions through a contract and tender committee. At the meetings, Petrosannan and Naftogaz agreed on trying to accommodate part of permanent facilities in the budget of 2015/2016, which was still under preparation at the time.

Nevertheless, the Ukrainian firm exclusively told Egypt Oil&Gas that it was not possible to include the necessary operations in the 2015/2016 budget. As the company further explained, the second stage of the Design Works for Permanent Facilities Project remains on stand-by as Naftogaz still awaits to receive its pending dues, which amount to as much as $30 million.

Since infrastructure is the basic physical system of a national natural gas scheme, which is completely vital to a country’s economic development and prosperity, the investments in oil and gas pipelines and permanent facilities are important steps to improve the Egyptian petroleum sector. Accordingly, Egypt is most likely to receive a great positive impact when the second phase of the project is concluded and the permanent facility turns operational.

Wael El-Serag contributed to the report.