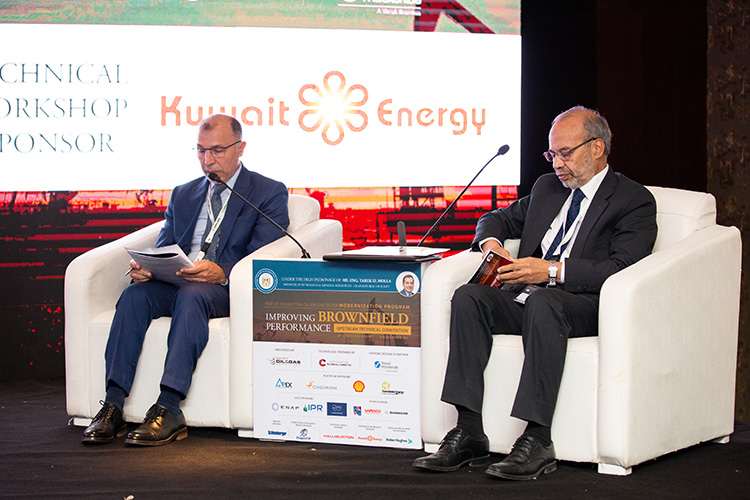 The third workshop on the second day of the Upstream Technical Convention, entitled HS&E Culture and Behavior, was chaired by Mahmoud Shawkat, Oil and Gas Consultant, and Samir Abdel Moaty, Country Manager, Egypt at Rockhopper Exploration, and it offered five presentations on Health, Safety and Environment (HSE).

Radwa Mourad Taman, Senior Chemical Engineer in the Operation Department at Gulf of Suez Petroleum (GUPCO), gave a presentation titled Separation of Oil in Water Emulsions using Integrated Membrane Technique. “The problem nowadays is that some petroleum companies – especially the oil companies – are suffering from the wastewater that accompanied the last final stage in the treating of this water, and that this water contains more than 15 parts per million (PPM) oil in water emulsions,” explained Taman.

The presentation’s objective included three stages; the first stage is preparing antifouling and antibacterial microfiltration membrane to separate the oil wastewater emulsions. The second stage is preparing the Reverse Osmosis membrane to reduce the salinity of the water so it can be re-injected to the wellheads as well; “it is like a double-advantaged project” commented Taman. The final stage is saving the environment from the oil quantity that is drained in sea water every year. During her presentation, she illustrated the different membrane types and that in order to separate oil in water emulsions; one should use micro filtration or ultra-filtrations membranes. Finally, she presented the cost calculations for this method, which turned out to be cost-effective.

The second presentation in the HS&E Culture and Behavior workshop was on Surge Analysis for Fire Protection System, and was presented by Mohamed El-Mehy, Senior Safety and Loss Prevention Engineer at Engineering for the Petroleum and Process Industries (ENPPI). “It is a transient positive pressure rise wave, that can easily exceed 50 barg, that propagates along the piping network of a firefighting system and bounces back, referred to as the scientific term Water Hammar,” El-Mehy defined his topic. He then proceeded to illustrate the causes of surge pressure wave in fire water network, which include sudden change in fire water flow direction or velocity when quick valve closure or opening occurs, or when single or multiple fire water pumps start up or shut down. El-Mehy also presented a case study of Assil and Karam Gas Development Project in the BED 3-Areas, Western Desert in Egypt, which is owned by Badr El Din Petroluem Company (BAPETCO). He concluded his presentation by asserting that the surge analysis study in the brownfields “is essential to eliminate or reduce any risk that may lead harm to personnel or damage to assets or environment.”

The third presentation was presented by Helge Hoeft, Area Manager Process Engineer at ILF Consulting Engineers, where he introduced Advancing Process Safety and Integrity Management Through Digitalization. He began by examining some incidents that “really changed the industry significantly”, which included The Langford, Australia Gas Plant Explosion in 1998 that resulted in the death of two people and made a staggering $1.3 billion damage to Australia’s economy. He defined Process Safety and Integrity Management (PSIM) in a very simple manner of “keeping it in the pipes, as long as we have everything in the pipes, then we are fine. That should be the key-target to us.”

Hoeft then illustrated the design and operating envelopes. “The key to all of this is that all personnel on an asset need to understand these envelopes. If there is only one person on the facility who does not understand the envelopes or does not understand the consequences of leaving these envelopes; you are already at risk,” noted Hoeft. He then introduced how to implement digitization in PSIM, concluding that digitization probably will not prevent another Langford, “but the likelihood of that happening again is probably minimal because data is everywhere and everybody has access to the data.”

The fourth presentation, titled Health and Safety in Brownfields, was presented by Ammar Hussein, Manager Director at Perform Safely (PERSAFE) UK. He explained the difference between HSE in brownfields and green-fields and presented several case studies including one on Pryor Trust Fatal Gas Well Blowout and one on Fire in Pittsburg. “When the investigation was done, they have found that the main problem is that they have not done the flow check,” explained Hussein on the aforementioned case study. He later on presented few ideas to reduce incidents occurring in brownfields. Such ideas include; creating emergency response plan that would be revised regularly and measuring the safety performance especially because “you cannot improve what you cannot measure,” Hussein commented. He suggested that companies should proactively approach how they measure safety through audits, inspections, and questionnaire. Finally, he presented a Safety Performance Measuring Model and concluded that “the low safety performance in one department affects the others.”

The fifth and final presentation on HS&E Culture and Behavior, titled An Innovative and Cost-Effective Solution to Gas Flaring in East Abu-Sennan, was presented by Mohamed Atwa, Senior Production Technology Manager in Kuwait Energy Egypt. During his presentation, Atwa discussed the details regarding the development and maximization of asset value, such as eliminating gas flaring to save the environment, capturing and processing associated gas as by-product, and increasing total field throughput and achieving production goals. He began by explaining how they initiated the project through screening the most optimum solution for their project. “We screened oil alternative for gas utilization or monetization techniques available,” he said, explaining that it turned out to be better for gas sale. He then spoke of the challenges that faced them during the project; these challenges varied from time-management, getting permits, and integrity related issues. “We have managed to increase our oil production -the main target of this project- by 1,700 barrels per day (b/d),” Atwa shared the results of their project and he then added “we have managed to extract about 180 b/d.” He concluded his presentation by encouraging other oil companies to benefit from this project and to look for alternatives instead of focusing on conventional methods.