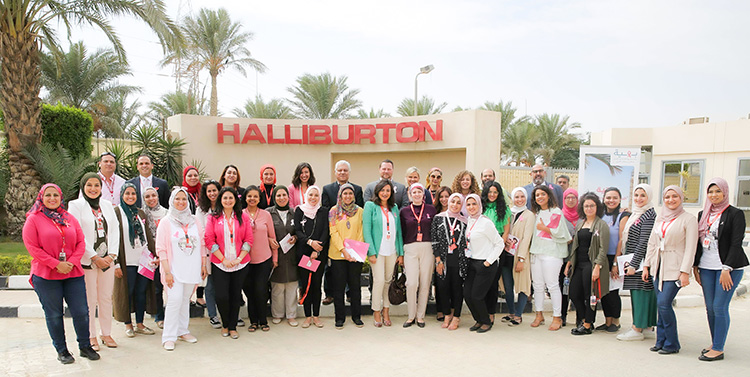 In honor of Breast Cancer Awareness Month, Halliburton employees around the world celebrated “Wear it Pink Day.” During that day, the employees shared photos and stories of their support in the fight against breast cancer.

Colby Fuser, Halliburton Vice President for Egypt and Libya, noted that Halliburton was always concerned to have an impactful role in the community. Launching these initiatives demonstrates that firsthand Halliburton supports important causes and is committed to improving the lives of people in the communities where they live and work.

Women Sharing Excellence (WSE) in Egypt, the first chapter in the Middle East and North Africa (MENA) region, has started its first year with a busy agenda of leadership, mentoring, and networking events aiming to promote the diversity and inclusion
in the oil and gas industry in Egypt and the MENA region.

As part of the Corporate Social Responsibility (CSR) policy of Halliburton WSE, and in light of Breast Cancer Awareness month, Halliburton held two seminars on
October 21, at Halliburton’s premises in Cairo.

Baheya Foundation for Early Detection and Treatment for Breast Cancer accepted the invitation presented by Fuser to organize these two seminars aiming to raise awareness on breast cancer as well as highlighting the importance of early detection under the title ‘Early Detection Awareness.’

The first seminar was presented to the female employees as well as the wives of the employees of Halliburton. The second one was for women from more than nine national and international oil companies.

It is worth mentioning that Halliburton is an American multinational corporation, which has operations in more than 70 countries and own hundreds of subsidiaries, affiliates, branches, brands, and divisions worldwide.

Baheya Foundation is a non-profit charity that treats women with breast cancer. The treatment is free and covers all stages, including early detection of the disease, surgeries, chemotherapy, radiation, psychological therapy, clinical nutrition,
and therapeutic therapy.