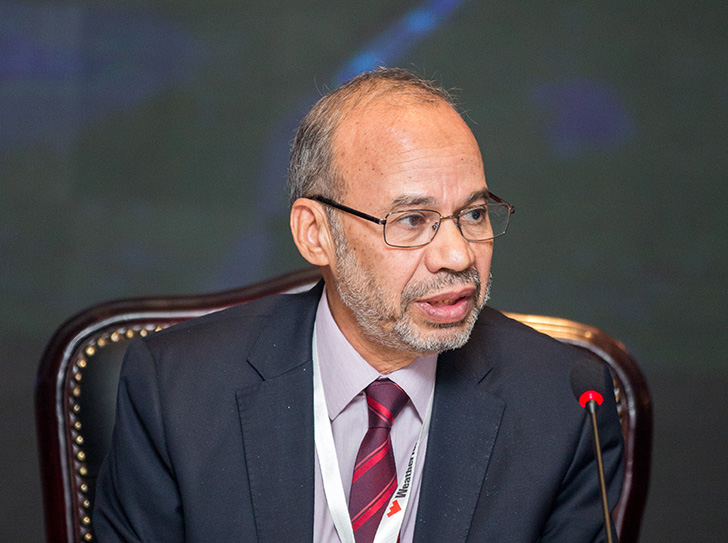 Country Manager of Rockhopper Exploration plc in Egypt, SAMIR ABDELMOATY, shared his views on the farmin/
farm-out agreements and revealed the challenges in the processes that the companies face in the existing
economic environment.

There are four mains reasons for companies to consider the reduction in the interest of their property through a farm-out option, according to Samir Abdelmoaty.

First reason is “the change of the company’s strategy,” that may revolve around a focus of business, explained Rockhopper’s Country Manager. For instance, if a company decides to invest in the domestic market, it would be divesting all international assets.

Another reason for a farm-out deal is that “some companies are trying to get rid of the tails of their portfolio; these are the smaller assets with a lower rate of return on investments, a limited scope of activities, or high cost assets.” An example of such a rationale is “what BP did in the North Sea and what they are also trying to do in the Gulf of Suez,” he added. “Major oil companies have huge portfolio and they have fields with high production levels, but, eventually, the fields turn mature and production is declining. Simultaneously, the cost of operation gets higher and the return on the investment drops.” As he further elaborated, “these types of fields also require greater attention from the company’s technical team that can be otherwise allocated to a more profitable concession. The company thus tries to replace the tails of its portfolio with more promising assets.” This is the point when a farm-out plan can materialize.

Third reason can be the fact that “some companies need a partner for technical expertise for their specific concessions and for the partners to share some of the risks with them,” Samir Abdelmoaty said. This will also “increase the number of experts in the field and bring in more advanced technologies into the field for a farmor.”

A possible fourth reason for companies to choose a farm-out path is that “some companies need financial assistance. In general, they have a good asset, but they do not have sufficient funds to continue its operation.”

Following a signing of such an agreement, “the involved players draft a Joint Operating Agreement (JOA), which further governs the relationship between the two companies, including the decision making processes, the voting rights for each party, budget approval mechanisms, individual operation approvals, decisions on drilling wells etc.”

While these processes seem rather straightforward, there are multiple complications that can threaten a profitable business plan. “The complications may be noticeable in relation to the farmor’s employees,” whom the company may request to accommodate by the farmee, after the farm-out process is completed, as Rockhopper Country Manager pointed out. Although the scope of involved obligations and commitments that stem from the farm-in/farm-out agreement necessarily depends on the percentage share the farmee is taking, and which of the parties will become the operator of the negotiated asset, the disputes are almost a daily routine. These relate to a variety of issues such as payment obligations, infrastructure and others.

“The payment obligations agreed upon between the farmor and farmee can come in different forms; either as a cash commitment or part in a work program and part in cash or at a later stage, once production commences,” shared Samir Abdelmoaty. Therefore, the disputes come to light less in relation to the finances that are precisely specified, and more often with regard to the situations when an asset comes with “a complicated infrastructure, mature areas, liabilities, or other legal issues.”

In order to minimize these potential disputes, “the farmor has to disclose all liabilities from third parties that would be tied to the asset and provide warranties for the farmee that there are no loans associated with the asset, no arbitration or no legal suits pending.” In fact, it is both the farmor and the farmee that have to declare to the other side their existing obligations and provide required warranties. Such a declaration by the two parties is a basic factor that should ensure a successful transaction.

As disputes may likely occur, especially after the drafting process of the farm-in/farm-out agreements is completed, possibly in cases when there is no alignment among the farm-in/farm-out partners, there is another defined safety net in the form of JOA. “That is why the JOA is an important agreement that will bring together any gaps in the farm-outs,” according to Abdelmoaty.  Nonetheless, he continued, “disputes may still surface especially when the parties interpret the terms of the JOA, which sometimes leads to arbitration.” However, arbitrations are lengthy and costly processes, therefore, the companies opt to resolve their disputes alone.

Beyond disputes, there are other challenges that the oil and gas companies face when farming in and out. As Country Manager Abdelmoaty elaborated in more details, the farmor should consider the following aspects: “the overall strategy, the number of partners, the timing, the target group of companies or a public tender, what percentage to be given away, the objectives such as technology, cash, financial strength, which can be achieved through a targeted selection of a partner etc.” Based on these objectives, “a company may identify a single partner or several partners in order to reduce competition in the market,” clarified Samir Abdelmoaty.

Furthermore, as he added, for a farmor, there is a need to “frame the farm-out carefully and in the right way.” This means that the overall objective is crucial to overcome a challenge in preserving the company’s reputation. It can be defined by “the relationship with the government” or “a possible previous failure in the concession.”

Another challenge relates to the framework of the agreements. Currently, in Egypt, “the farm-out is a long process,” mainly in terms of the bureaucracy, affirmed Samir Abdelmoaty. To ease this process, achieving clarity of the agreement is essential. That is why the farmor and farmee should require relevant declarations from one another before any preliminary deals are outlined.

Similarly, the timing of the deal can pose conundrums, most importantly, because this can be affected by economic, political, and industry factors, as Abdelmoaty noted. This also necessarily relates to the global oil prices and regional industry dynamics. For instance, “when the oil prices are low, the market turns into ‘a buyers’ market’,” however, the rationale behind the farm-outs in this environment is questionable, unless forced by the financial stability of the company. In Egypt, there have been cases of buyers in the oil and gas sector, as Abdelmoaty pointed out, who decided to purchase assets to add value to a concession, but only to then sell off the property to generate cash, not with an intention to produce oil in the country and contribute to the overall economic recovery.

Nonetheless, Rockhopper’s Country Manager is optimistic about Egypt’s oil and gas industry, farm-ins and farm-outs regardless.

As he said, “we still have to do more studies to find new hydrocarbon resources in new untouched basins like the Red Sea, the western side of the Mediterranean area and in Upper Egypt. Also, within the existing basins, we still have not explored and tested all the zones.” What is also optimistic, he continued, “we still find new oil in the Morgan field after sixty years of the drilling.” Continuous production from the mature fields in the country showcases a strong potential for the future.  Moreover, “there are a lot of unconventional fields in Egypt; both oil and gas, and we need to encourage companies to invest in the unconventional plays.”

In light of that, the current production sharing agreement seems to not be the best suitable model for the development of these plays. Therefore, Abdelmoaty explained, Egypt needs new agreement models to allow the unconventional resources to be developed and to compensate operators to make returns on their investments. Through these measures, the conditions for farming in and farming out will also likely promise improvements and encouragement for the private sector, especially, as the Petroleum Ministry is currently working on changing the agreement model under the umbrella of the comprehensive and complex Modernization Program.