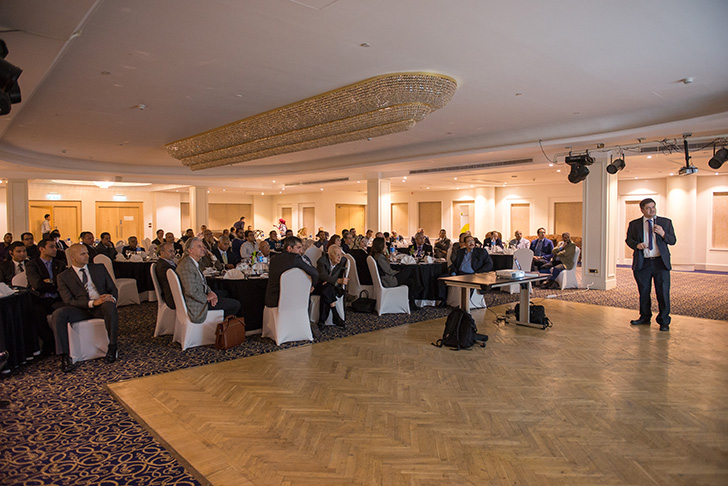 The Egyptian oil and gas sector took an important step to boost its status as an energy hub as it moves forward with drilling operations in unconventional gas fields. To promote valuable insights and help the petroleum industry in its way towards unconventional, the Egyptian branch of Chile’s Enap Sipetrol hosted a special event in partnership with the Egyptian Petroleum Exploration Society (EPEX) at Holiday Inn Cairo Maadi Hotel on April 4.

The event kicked off with a welcoming speech by EPEX’ Chairman, Ahmed Abdel-Fattah, and counted with the presence of prominent figures of the Egyptian oil and gas sector. It is worth mentioning that EPEX is a geological society of a public-spirited, nonprofit organization funded in 1982, whose mission is to spread knowledge, share best practices, and apply new exploration ideas for enhancing innovation and for the improvement of the oil and gas business in Egypt.

In line with EPEX’ vision, Enap Sipetrol’s Exploration and Reservoir Manager, Lisandro Rojas Galliani, led a presentation entitled the “Challenges in going from a ‘Conventional’ to an ‘Unconventional’ Business Model: Experiences and Lessons from the ZG Tight Gas Project in Southern Chile.”

In December 2013, Rojas, who has 37 years of experience in exploration projects in South and Central America and North Africa, presented in a conference held by EPEX the potential of Chile’s unconventional production. In the recent event held early April, the expert geologist had the pleasure to disclose Enap Sipetrol’s achievement in fulfilling Chile’s potential and revitalizing the Magallanes basin, which had produced gas through conventional operations for more than 70 years.

As stated by Lisandro Rojas, the first problem to be overcome in a new project is the lack of data. “You suddenly realize that there is no reservoir data, and you need months or years of data to determine the quantity of resources available in the field,” he explained.

In Egypt’s Apollonia field, the companies involved in the unconventional project – Schlumberger, EGPC, Apache, Shell, Khalda, and Bapetco – have already managed this issue and drilled two vertical wells to collect data to characterize the reservoir, as well as two additional horizontal wells. The technical team also received a new technology integrated group and a technical expert assimilated in technical domain who has a lot of experience in unconventional work.

The Economics of the Field

Since unconventional wells require more data, special technology and some kind of stimulation, they are naturally more expensive than the ones in conventional fields. Therefore, it was highlighted in the event that, when engaging in unconventional projects, the companies must develop a massive cost-reduction scheme. “In Chile, 70% of the investment went to drilling, so if you save every penny on drilling, you will be saving a lot of money,” Rojas noted.

In its transition, Chile succeeded in drastically reducing its drilling costs. At the beginning of the scheme, Enap Sipetrol used to spend $5 million to drill its wells, which was later reduced by 50%. Additionally, the company went from 32 drilling days down to only six days, another important achievement to maintain the unconventional project alive.

When Chile managed to reduce its drilling costs in half of the price, the company finally started to take profit from its activities. In the project’s early days, this profit did not exist. “Because the income of each well is modest, these [unconventional] schemes are very sensitive to price and contract conditions. In unconventional, you can come from positive to negative very rapidly,” Rojas noted.

Conventional fields produce a big quantity of gas; however, in unconventional ones, production is smaller, and the income, the portion to share in royalty and taxes are also modest, while drilling and production costs are higher.

Accordingly, the importance of establishing new contract terms and how much from the project’s budget will be available for shares to the government (royalties) was also pointed out during the presentation.

The solution presented to avoid having the project killed by economic struggle was the creation of a flexible government take that is adaptable to the project. “If the scheme is very profitable, the government takes a biggest share; if not, it takes a smaller one,” Rojas said.

He further mentioned that the duration of unconventional contracts must be very large by default, since production requires more time due to the big amount of questions that must be answered in the project’s early phases.

“This flexibility is the key to keep the project going. In Mexico, for example, there are no special contracts for unconventional gas. Despite having the potential and the resources, the price of gas is killing Mexico’s potential. Since the country imports gas for a cheaper price than the unconventional one, there is no way of making it economical and profitable,” Rojas explained.

Going from conventional to unconventional gas certainly grants a bigger amount of resources, which can really rejuvenate any basin. However, a country must go through a lot of effort to make it economical successful. “Unconventional represents a completely different business model. It requires dedicated teams just to deal with costs, logistics and supplies, as well as some kind of special treatment from the government for contracts and taxes,” he added.

Rojas stressed that what made the unconventional project in Chile successful was the possibility of modifying contracts. Instead of raising the gas prices abruptly, Chile managed to do it smoothly without severely affecting the economy with the business model transition. Moreover, the production increase was so significant and the economic environment so favorable that nowadays Chile is able to export its tight gas, and became a supplier to countries from which it originally used to import.

Each Country Has a Different Reality

Companies engaged in unconventional projects should not compare its costs with the ones in the United States, since no country has ever been able to duplicate the cheap way the US drill unconventional. Hence, different fields throughout the world are going to have their own reality of costs, but the American scheme should not be used as parameter to the oil and gas firms worldwide.

“There [the US], they drill really big wells for $5 million; in Mexico, in the other side of the river, the same wells were costing more than $10 million, according to Petróleos Mexicanos (PEMEX),” Rojas exemplified.

Egypt Is a Fruitful Land

Egypt’s potential for unconventional gas represents a significant asset to remediate the country’s current energy struggle and boost its status in the energy market. However, the Arab nation must adapt its conventional regulations to welcome the prospects of unconventional production.

“There are no agreements or contract models for unconventional in Egypt. It should be created and for a long duration,” EPEX’ Chairman, Ahmed Abdel-Fattah, stated to Egypt Oil&Gas in the sidelines of the event.

The successful model applied in Chile served as an inspiration to the Egyptian petroleum experts attending to EPEX’ event. Commenting on the projects being developed in Egypt, Rojas affirmed that “the main point is that each country will have its own particular situations and will have to develop its own particular solutions. However, if the unconventional potential is there, the project will need some help, otherwise the gas will stay in the ground.”