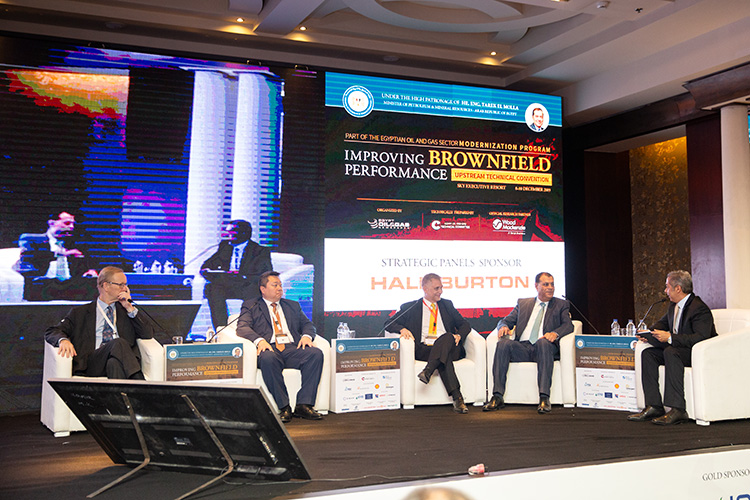 As the Technical Upstream Convention held various panels on brownfield efficiency, industry experts came to be a part of edifying discussions. The second panel of the first day, which was moderated by Mohamed Fouad, Managing Director of Egypt Oil & Gas, was dedicated to enhancing focus on brownfield technology.

Panelists included the Egyptian General Petroleum Corporation’s (EGPC) CEO, Abed Ezz El Regal; Senior Vice President of Halliburton, Ahmed Kenawi; the Vice President and General Manager of Apache, David Chi; and the President of Gaffney, Cline & Associates, Nathan Meehan. As Fouad introduced the panelists, he emphasized the need to discuss technology as it is one of the most important aspects in terms of production optimization when it comes to brownfields.

Technology as a Key Enabler for the Sector

According to Ezz El Regal, drilling is opening the door for many new opportunities on the horizon and many new technologies to be used in the ground. One of those opportunities that he stressed on is the digitalization of all drilling activities, explaining that with the latest data, it is inevitable to have better management, better efficiency, and higher economic return. This will also pave the way for big projects, utilizing the best technologies for different locations and leveraging seismic surveys accordingly, he said.

To make this in an economic way, the needed personnel should be developed for such technology, and to make use of the latest updates, training and evaluation are required. Through seismic, drilling, and development, the new technology is not limited to reservoir management, Ezz El Regal elaborated, adding that “the best utilization of the existing facilities and infrastructure [will facilitate maximizing production].

Moreover, the CEO suggested that in order for such technologies to thrive, the government must sit together with international oil companies (IOCs) to discuss the best fiscal regime before proceeding with such technology. “I think, together with our partners, we can hire more people for research in companies,” Ezz El Regal noted, mentioning that this will help in flourishing Egypt’s future.

Nevertheless, it is important to note that there was a general consensus by the panel that technology does not necessarily mean high cost. As a matter of fact, Kenawi said, “the latest technology is meant to improve cost efficiency. I am very intrigued when we talk about technology; in my opinion, the key is how you can use the technology to lower the cost per barrel equivalent. The key is to bring technology that can increase your production or lower the cost. So, if we put a lot of budgets in increasing the reliability of the tool, then you can increase the efficiency and you can make a better lower cost per barrels of oil equivalent (boe), or you can increase as well the production.”

Chi focused on the brownfield solutions that can be introduced to the table. “Basically, trying to enhance recovery really changes the picture of oil production for Egypt,” he said, explaining that from the government to service providers to operators, all sectors should be working together towards a common goal.

On the other hand, Meehan shared his opinion regarding mature field optimization and the risk it can bring along with it. “If you look at the risk reward range of opportunities, clearly the highest risk reward is in the exploration world, and mature fields tend to relatively [have] high risk and high reward,” Meehan thought.

Meehan recounted a previous debate he had on how the budget of large mature field projects should be allocated. What he came up with was that large capital spending on mature fields is almost always justifiable, as it rarely ever fails. According to Meehan, any effort or capital spent on mature field optimization is never lost because the field’s production always exceeds its level. Thus, one has to put the work in and analyze the process carefully to achieve targeted results, he said.

“The one thing I can assure you from any industrial manufacturer process is that the more you make of the same thing, the lower your well costs,” Meehan remarked.

“You can always be faster when you look at the kind of analysis that you can optimize via frac, which is almost always integral to optimizing old fields. The blocking attack, as we say in American football, of mature field optimization is how you get the most out of your assets,” Meehan explained.

Ezz El Regal weighed in on the technological environment in Egypt and how it can be improved, saying that it all starts with having a robust education system which will be a continuous source of information for not just students, but engineers as well. “All of this should be transferred from academic study with technology application,” he said, stressing that this is not solely restricted for academia, but for research as well.

These research centers should develop human resources with a diverse set of skills, Ezz El Regal added. He also said that this should be supported and backed up by the Ministry of Petroleum and Mineral Resources, headed by the minister himself, in addition to the ministry’s partners and IOCs. “There is always a continuous dialogue between us, foreign partners and IOCs,” he said.

Besides, the technical and economic model should be ever-changing as the oil sector has continuous nature to evolve. Ezz El Regal further elaborated, saying that this changes the mood from one investment to another.

Ezz El Regal stressed that with Egypt’s qualified human resources, coupled with technology innovations, “I think the potential is here,” he said, adding that “we just need to look at the tendering process.” According to the CEO, targeting human resources is a way to talk to different people and let them actively participate in bid round. Thus, “we should empower them to make the right decision,” he added.

As technology is another enabler, he further said that it is not just about technology but how to run your business, analyses, and how to make resources economic.

Chi, on the other hand, noted that improving safety and efficiency should come as a top priority for service providers in Egypt as well as operators. “You need to look at value creation,” he pointed out, indicating that it is one way to improve safety and efficiency, and thus, improve the whole technological environment.

Chi also added that working with IOCs will facilitate operations, especially in the upstream as it depends on diverse roles. “If we work with IOCs [for opportunities], I think we have a lot to do with them and all of us will win,” he added, noting that there is a need to go in a full collaboration with IOCs, where one can work hand in hand with an operator.

Brownfields within the Market

Speaking of technological evolution, Kenawi shared his insights on today’s evolving technologies, saying that one can look sideways and see the different kinds of advancements everywhere; one technology can go up to 100 feet (ft) in depth one way while another can go 50 ft in depth the other way as there are a lot of new technologies in the Electric Submersible Pump (ESP).

Kenawi also recommended that we should apply the technology needed for a specific challenge, which might not necessarily be a new technology. “You need to understand what is the challenge exactly and you can apply the technology,” he said, giving an example of the unconventionals in the US, which accounts for 10% of the global market and require a very specific kind of technology.

Nevertheless, there should also be an endeavor to reduce the amount of equipment on the challenge/site, Kenawi said. Although this is not a new technology, but it can either lead to creating a new opportunity or a new challenge. “I think we are in a very good era that the technology now is focused again on either increasing production or lowering cost. And Egypt has a fundamental, very good reservoir in the brownfield,” he said.

On the Upstream Modernization Project

“Working with IOCs, different cultures, different technologies, all this is collectively going to help have a transparent technology, better solution, and better vision for the existing [facilities] to transfer the success story and to avoid failure,” Ezz El Regal concluded.

Giving one last piece of advice to the audience, Meehan said, “taking risks sometimes is going to involve some failures, but if you do not have a system that encourages that, then you do not have successes to go on.”

Chi said, “You have to analyze and prioritize each project,” emphasizing that with digital capabilities, operators should seize the chance to keep on expanding day by day.