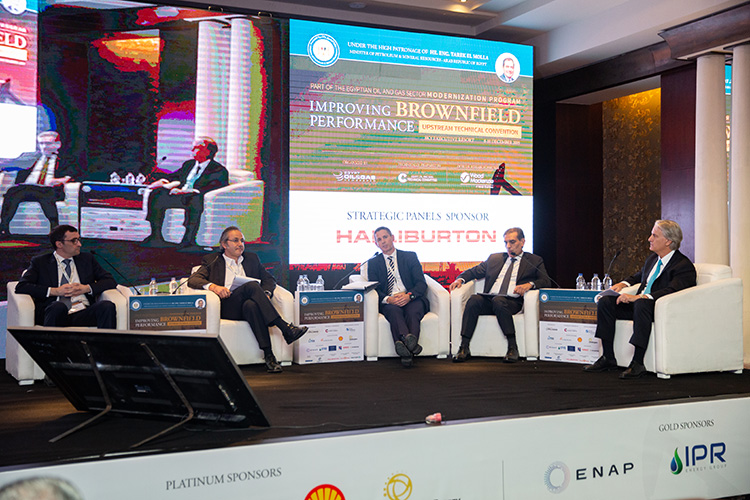 In the presence of the Minister of Petroleum and Mineral Resources, Tarek El Molla, the Upstream Technical Convention’s kick-off panel saw four major experts in the oil and gas sector giving insights into enhancing competitiveness and business models in one of the sector’s puzzles, which is brownfields.

The panel was moderated by Thomas Maher, President and COO at Apex Energy, and Chairman of the EOG Technical Committee. Panelists included representatives from two major international oil companies (IOCS) operating in Egypt; Randy Neely, TransGlobe CEO; and Tawfik Diab, Cheiron Chairman, in addition to a representative from the Ministry of Petroleum and Mineral Resources Ashraf Farag, First Undersecretary for Agreements and Exploration, and Ian Thom, Research Director Middle East at Wood Mackenzie.

Before the discussion, Thom delivered a presentation on improving brownfields production, as well as showcased some case studies on brownfields redevelopment.

During his presentation, Thom clarified that the global upstream capital expenditure (CAPEX) increased in 2004, yet, between 2015 and 2016, the world entered a surviving urgent stage, and moved to a stage of stabilization in 2016. Afterwards, companies began planning for their future by paying attention to the capital efficiency of resources in order to be able to fulfill long-term demand and remain competitive.

When it comes to the upstream in Egypt and the Middle East and North Africa (MENA), Thom explained that production activities were held up in the region since 2014. However, “Saudi Arabia, UAE, Iraq and Kuwait are committed to long-term oil projects and continue to invest,” Thom said, adding that “Egypt is ranked the sixth for regional upstream CAPEX.”

Focusing on Egypt’s upstream CAPEX, Thom referred to the decline in oil investments by 15-20% per annum since 2014. However, Zohr field was the game-changer discovery, attracting more investments between 2016-2019. “The massive impact the big offshore gas project had [helped] Egypt maintain its position among the top investors in the region,” Thom commented.

With an eye on the oil and gas production in Egypt, Thom said, “we look at production since the year [at which] the field started production. So, you can see how much oil production comes from fields started up many years ago.” adding that “mature fields have a large [segment in] shaping oil production.” It is worth mentioning that around 40% of oil production comes from mature fields; hence, production needs to be sustained to avoid any change that may occur. Thom pointed out that when Egypt is compared with other countries in the region, it is found that “one of the core indicators [in Egypt] is the large number of companies that are active in the country.”

Continuing his presentation, Thom mentioned a UK case study, where “the UK had a real crisis in 2014 as the production had fallen by two-thirds,” he said, adding that after this crisis, the government changed its strategies to deal with such an issue and maximize its economic recovery. Accordingly, the country created new regulator with new powers to drive stewardship, regulation and collaboration.

Thom brought up another case study in Oman. “In Oman, there has been a huge focus on enhanced oil recovery (EOR),” Thom said, noting that “if you look at the production between Egypt and Oman, I think Oman has extended and maintained its [Petroleum Development] PDO. It is looking to generate 25% of its production from EOR and with that comes some challenges.” Moreover, Thom stressed that providing companies with a suitable framework and business models are essential to ensure success in brownfield redevelopment.

Following the presentation, Maher initiated the discussion by asking Farag about his opinion on reinforcing competitiveness as a vital way for stirring up investment opportunities to develop the Egyptian oil and gas sector. Farag stressed that the Ministry of Petroleum and Mineral Resources, under El Molla’s leadership, spares no effort in implementing development strategies to promote the oil and gas sector in Egypt. He continued illustrating that one of the strategies Egypt has implemented is the economic reform program. “The economic reforms, supported by the Egyptian President Abdel Fattah El Sisi, has started [its] influence on the dynamics and the business development of our sector. Additionally, this is vital for attracting more global investments,” Farag clarified.

Farag pointed out that the ministry began its promotion plans from 2016, bolstering opportunities in the Egyptian oil and gas sector, asserting that “the Ministry of Petroleum plays a central role in attracting investments by presenting Egypt’s opportunities in international conferences and forums.” Farag praised the presence of IOCs in Egypt, bringing their new technologies to help the Egyptian sector achieve its goals. Building on that, Farag mentioned the ministry’s endeavors to attract IOCs including the huge decline in arrears in a record time of two years, the regional projects initiated in the Mediterranean Sea, the Red Sea, and the Western Desert, in addition to implementing a new gas pricing formula.

Speaking of the best practices to operate Egyptian brownfields, Neely commented that the deployment of new technologies is the dominating trend in our world today. He clarified that these technologies can improve the ability of the Egyptian sector in operating brownfields.

Furthermore, Neely pointed out that “from a commercial perspective, we also look at new ways that enhance production, enhance development, something for us that we look at,” illustrating that “it all goes back to economics, fiscal regimes, and whether we can employ technology to make that work better for us or not.” Neely stressed the impact of new technologies on improving brownfields production.

Speaking about Cheiron as an IOC operating in the Mediterranean, the Gulf of Suez, and the Western Desert with many successes and discoveries in the recent years, Maher asked Diab about the main elements considered in the selection of an appropriate business model. Answering this, Diab agreed with what Thom mentioned in his presentation about the importance of investments in enhancing competitiveness, as well as highlighting Egypt’s position in the world map. Diab remarked that “I think the key process is just to focus on our home. What we do is that we focus on the mature oil fields of the Gulf of Suez.”

Additionally, Diab stressed on an important criterion while selecting a business model, which is “to make sure that you have specific competencies that fit [this business model],” adding that the business framework has to cope with the selected business model to achieve the targeted results. Supporting his opinion, Diab mentioned an example about Colombia, which suffered in 2003 from a low production capacity of around 600,000 barrels per day (b/d). Within five years, the country’s production boosted to around a million b/d.

Moreover, Diab agreed with what Farag mentioned on the importance of technology, saying “the implement of technologies and Artificial Intelligence (AI) is critical. The oil and gas sector has been left behind in the application of AI, the application of big data, data science and machine learning. This is something that is applied in many areas and on many factors. I think if you incorporate this with the business model, it is going to be critical for the sector.”

Asking about the main drivers to bolster competitiveness, especially in brownfields, Thom explained that these drivers will mainly depend on what we need to address and develop. However, these drivers are mainly about technical progress, collaboration, having an access to infrastructure, benchmarking, and sharing best practices.

Additionally, Thom stressed the importance of having business models with an appropriate framework for the business success, especially in brownfields. Investing in brownfields means facing new risks and challenges that do not exist during early stages of production. Hence, a suitable framework and business models have a great impact on the sector’s success.

With an eye on Cheiron’s recent strides to manage and unlock brownfields’ potential, Diab clarified that “[in Cheiron,] we have a focused approach. So, we have to know what we are doing… to remain more competitive than anyone else.” Furthermore, Diab agreed with what Farag mentioned on the cruciality of attracting more investments to optimize production.

Additionally, Diab pointed out that Cheiron focuses on investing in stirring up production in the Gulf of Suez’s mature fields, noting that “I think we are in an area where we are building our expertise and competencies.” Furthermore, Diab referred to Cheiron’s investments in the Western Desert, in collaboration with the North Bahariya Petroleum Company (Norptco), in addition to its activities in the shallow Mediterranean, where Cheiron works mainly in West Burullus.

Maher discussed the different endeavors of TransGlobe to maximize developing and recovering resources in the West Bakr, West Gharib, and North West Gharib. Neely commented that through the application of the right techniques, the company managed to adopt unconventional approaches, which resulted in achieving a 10% recovery of the reservoir. “So, we are talking about [achieving] around 25-26 million potential reserves,” Neely added, highlighting TransGlobe’s strategy to boost their production in West Bakr to reach 9,000 b/d.

Neely stressed on the vital role of implementing the new technologies to increase the company’s production and reserves, noting that “if we have the right framework and the right timeline, the opportunity is there.”

Closing out the panel discussion, Maher stressed the importance of sustaining competitive business models to enhance production, particularly from brownfields. Farag commented on the ministry’s process to improve the Egyptian sector, “this process is based on transparency and consultation with our partners,” explaining that “the ministry established an open dialogue with operators, service sector, [the Egyptian General Petroleum Corporation] EGPC, and Egyptian holding companies to [adopt] a strategy to reverse the production decline.”