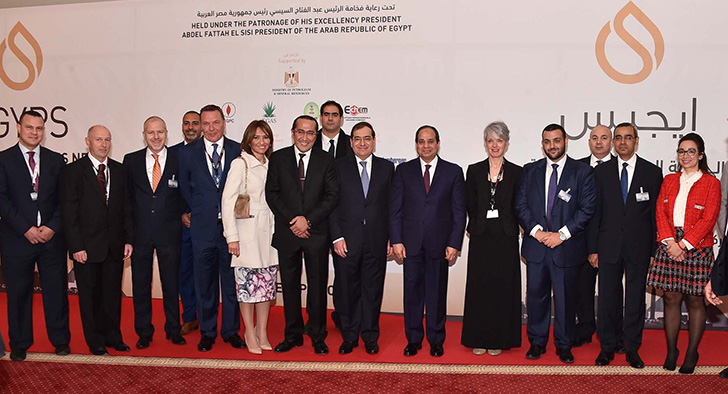 The Egyptian oil and gas industry eyed a memorable day with the kick off of Egypt Petroleum Show that expands a spotlight on the entire energy sector with the presence of political figures, key industry leaders, delegates, and visitors.

His Excellency President, Abdel Fattah El Sisi, who holds the patronage over the event, has expressed his dedication to the development of the oil and gas sector by attending the official opening ceremony of EGYPS Conference and Exhibition. His Excellency Prime Minister, Sherif Ismail, and His Excellency Minister of Petroleum and Mineral Resources, Tarek Molla, presented their opening speeches in Nefertiti Hall, followed by a keynote speech to open the Ministerial Dialogues panel of the Strategic Conference.

His Excellency Minister Tarek El Molla confidently pointed to the remarkable progress that the oil and gas industry in Egypt has achieved. “We have taken serious action to stop big decline and encourage our partners to put their efforts in bringing up the gas discoveries that they have and develop them. After the serious reforms that we have adopted, we were able to sit together with our partners and readjust our agreements to make the adequate economic balance between both parties.”

Furthermore, the Minister highlighted Egypt’s success in accelerating the work across the entire sector with a specific focus on super giant Zohr gas field. “We were able to put on stream different projects, and as a result, we have been able to talk about Zohr,” which Egypt has tried to materialize in a record time, “by bringing the gas on stream in two years from the day of discovery.”

As he then concluded, “what we are doing currently is accelerating to bring all the resources that we have together on stream as fast as possible. We are achieving self sufficiency of gas, hopefully, by the end of 2018. Hence, afterwards, by 2019 and beyond we will be able to restore our export facilities and resume the export of gas but it needs to have proper added value industry expanded to ensure the proper revenues to our economy.”

“We have proven that we can do amendments of concession agreements if needed and adjustments of pricing if needed. We have a really attractive investment environment in the oil and gas business,” affirmed the Minister.

A distinguished guest of the event, His Excellency Dr. Sultan Ahmed Al Jaber, Minister of State of the United Arab Emirates, and ADNOC Group CEO, delivered an inspiring keynote address to the top industry leaders and government officials.

“Studies and researches show that the demand on energy will continue to increase at a rate not less than 25% by 2040. In order to meet the rising demand, an amount of $25 trillion should be secured in the coming time, according to the EIA estimates. To secure this supply, there is a necessity to establish new creative and fruitful partnerships among the governments, the IOCs and the funding bodies in this sector,” Dr. Al Jaber noted.

Giving an overview on the global energy scene, he further commented on the recent positive development accomplished by the industry in Egypt. “Egypt has proved it is a trustful partner in the energy sector through enforcing suitable financial policies and applying convenient legal and organizational frameworks that encourage IOCs such as BP, ENI, Shell, ExxonMobil, Dana Gas, and many other to be listed for investing in the oil and gas sector in Egypt.”

And “these rational policies began to pay off with important discoveries of hydrocarbon resources,” UAE’s Minister of State further noted. In 2015, the biggest gas field in the Mediterranean Sea has been discovered with reserves of around 30 tcf. Adding to these major discoveries in the Western Desert, Egypt will be able to attain energy self-sufficiency and even more so become a gas exporter.

“The richness in hydrocarbon resources along with the convenient economic policies are the major factors that boost the confidence of the foreign IOCs” in Egypt as well as “the confidence of the global and international institutions including the International Monetary Fund,” which will help to “further reconsolidate the sustainable and deserved future development for Egypt.”

Dr. Al Jaber stated: “This is the right and the ideal time to pump investment in Egypt to secure sustainability of the progress. Holding EGYPS comes in line with the diverse and important developments and discoveries the Egyptian energy sector has been eyeing.”

The Ministerial Panel further introduced His Excellency Dr. Ibrahim Saif, the Jordanian Minister of Energy and Mineral Resources, who contributed to the debate by drawing attention to untraditional methods of strategizing. He stated that “we really need to embark upon a strategy to diversify our sources of supply.”

On this account, First Undersecretary at Egypt’s Ministry of Electricity and Renewable Resources, Dr. Mousa Omran, added that the country has progressive plans in adding “more than 37% of energy from renewable sources by up to 2035.”

As for Jordan, according to Dr. Ibrahim Saif, the kingdom is also looking into possible cooperation scenarios across the region and with the private sector aimed at exploration of the kingdom’s resources.

Both regional cooperation and exploration for new resources are standing in the centre of attention also of Cyprus. As Dr. Stelios Himonas, Permanent Secretary of the Cypriot Ministry of Energy, Commerce, Industry and Tourism, noted at the panel regarding the exploration needs: “We have been fortunate enough to have hydrocarbon discoveries in the Exclusive Economic Zone (EEZ) of Cyprus. We are promoting exploration in EEZ, as we all know that we need discoveries to achieve our goals, and the potential seems to be there. We have licensed 4 blocks so far, and we are now negotiating to license another 3 blocks.”

This implies to build strong ties with a variety of partners and achieve progress in multiple sectors. “We need to build infrastructures, we need to create an investment-friendly environment, we need to exploit synergies and cooperate with others. We are putting a lot of emphasis in cooperation,” Dr. Himonas concluded and thus symbolically defined the parameters of future success for all involved parties in the region.

EGYPS 2017 Exhibition turned the three halls into a rich environment for companies that were looking to expand relations with Egypt and maximize the return on investments. The exhibitors have been enthusiastic and positive having reached optimistic business partnerships.

For the exhibitors, EGYPS presented great prospects to generate new sales leads, increase brand awareness, meet with and sell to existing and new clients, gain entry into new markets, find regional agents to represent the company, launch new products, and be part of the growth in Egypt’s oil and gas market.

“We are here to open the market in Egypt and find more projects to participate in the Egyptian oil and gas sector. Egypt is developing faster and faster, especially for the oil and gas industry, we came seeking more opportunities,” said Lyu Qihui,  International Business Department Project Manager from Jiangsu Seagull Cooling Tower Co. Ltd. “EGYPS Exhibition let us relate more with people from the Egyptian market and also from other countries, which gives us great prospects for the future,” he added.

“EGYPS is a good opportunity to see how attractive Egypt really is. We look forward to doing some business in Egypt and we seek alliances with Egyptian companies,” John Shand from Scotland Engineering Manufacture (SEM) stated.

“The technical challenges of Egypt are interesting for us. We are coming from the North Sea, and Egypt has many similar technical challenges, such as drilling. We believe the solutions we have are very relevant for Egypt,” noted Tom Donnelly, Aberdeen Drilling School’s Business Development Manager.

EGYPS 2017 Exhibition has successfully introduced Egypt’s resources and potential to the world and it has served as a channel for future collaborations to develop the prominent industry in the country.

“The fact that this event is so large and supported, having the President and the Prime Minister open up EGYPS 2017 is a sign that the country is ready to embrace on oil and gas. And they are looking for foreign investments and technology to move the industry forward. I think this is a very bright day for Egypt and for the oil and gas industry here,” concluded Wes Scott, Executive Vice President, Energy, dmg events.

The picture in Egypt is bright with the recent discovery of the offshore Zohr gas field, the largest proven gas field in the Mediterranean, and, in the recent years, over 86 oil and gas discoveries were made. EGYPS 2017 has paved the path for a new prosperous future for the country’s industry.