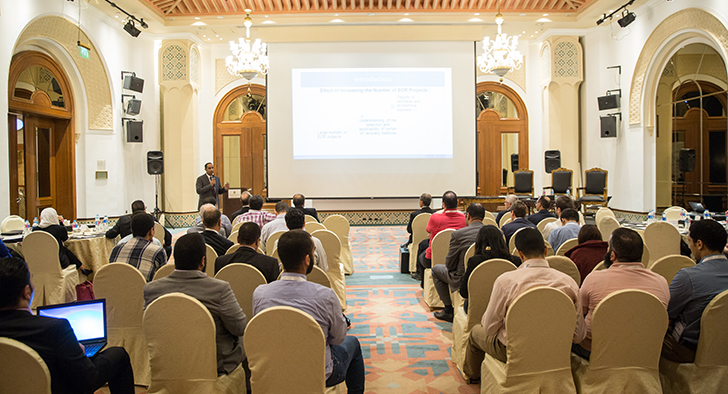 The EOR/ Water Flooding Technical Convention dedicated a day to a series of technical workshops bringing together experts in the oil and gas field to discuss new ideas and newly implemented techniques, as well as to learn from success stories.

While the first two days of the technical convention provided a unique opportunity to hold a dis-cussion about EOR investments, the workshops was an opportunity for audience to divide into smaller groups for evaluation of innovative ideas.

Well stimulation techniques are designed to restore and enhance well productivity. Introducing the techniques, which include acid or solvent jobs, and hydro fracturing, Ahmed Abdel Hamid, Pe-troleum Engineer at Qarun Petroleum Company (QPC), explained the benefits. According to Abdel Hamid, having applied re-fracking technologies, QPC has improved waterflood performance as it successfully increased well productivity by 25% and doubled water injection. “Re-fracking is proved to be one of the effective and economical solutions to enhance or regain well’s productivi-ty or injectivity, and to considerably prolong well’s life,” Abdel Hamid concluded.

In another presentation on fractured reservoirs, Saber Moustafa Selim, Former Exploration Gen-eral Manager at SUCO, talked about the role and contribution of 3D fracture trends of basement on EOR. On the case of the Zeit Bay field, located at southwest offshore part of Gulf of Suez, Moustafa Selim stressed that fractured basement is included in the category of un-conventional reservoirs and its performance needs better understanding and characterization to optimize the drainage and EOR. The most important issue is to define fracture trends, where 3D fracture trends can be built and calibrated against fracture density or well test permeability values.

Addressing the issue of cross flow in a multilayer producing well, which is a common problem of highly depleted mature fields, Colin Cranfield, Principal Reservoir Engineer, Baker Hughes pointed to the challenge of the communication between injectors and producers. Cranfield introduced ad-vanced communication analysis technology, provided by the company that serves to optimize wa-terflooding. The SweepSCAN™ technology is “based on mathematical analysis that matches the similarity in shape between different signals about oil rate, water rate, and applied pressure.”

Another strategy related to the stimulation is the zonal isolation of depleted zone by using organic crosslinked polymer, Alaa Epead, Coiled Tubing & Stimulation Engineer, Technical Advisor in Halli-burton, explained. He mentioned some of the most common well problems such as the cross flow, the flow behind pipe and casing leaks, or the coning/cusping, that the company encountered in the Meleiha field. Epead then introduced Halliburton’s Organic Cross-Linked Polymer Technolo-gy (OCP) as a solution to tackle these difficulties, which has proven to maximize production from high pressure zone and prevent cross flow. The OCP allows to “permanently seal the target zone by forming a three dimensional rigid gel which is proven to be stable up to 400 degree Fahren-heit,” Halliburton’s Engineer added.

Eslam Hamed and Mohamed Abass, Senior Reservoir Engineers, Qarun Petroleum Company (QPC), presented hard challenges and proper solutions that have been implemented during the company’s Western Desert field development phases. They introduced the stimulation technique deployed in the El Diyur mature black oil field to unlock the reservoir oil potentials. The engineers said that after a decline in the oil production in 2007, a water-flooding project was implemented, and hydraulic fracturing was identified as the optimum stimulation technique in this case.

The majority of mature fields in Egypt are operating under water flood to maintain reservoir pres-sure and enhance hydrocarbon production. In mature water floods, oil is usually co-produced with large volumes of water – water cut larger than 75%; however, a significant amount of unswept oil remains in the reservoir as floods are operated at less optimal conditions over many years, partic-ularly as the oil production gradually declines over time and the incentives for investments wane.

Mohammed Ismael, Enap Sipetrol International, Senior Simulation Engineer, presented a water management method – streamline-based flow simulation. The technique is to manage water and miscible flooding, which requires an understanding of how injectors displace the fluid to the pro-ducers. A key element to a successful flood is good sweep efficiency, which can be significantly impacted by reservoir heterogeneity resulting in areas of water cycling and poor sweep as flood become mature. Case studies on areas in which the technology has proved valuable show that the method provides “a very quick tool to study and evaluate the connectivity any group of wells,” he said.

Another challenge of waterflooding in offshore fields related to the question about the location for water injection in the wells. This requires constructing long pipelines, drilling water source wells – aquifer water, and using the sea water which needs a pumping system on the platform. All of the mentioned methods are time and cost demanding. The dumpflooding, or gravity water-flooding was presented as a viable solution, as Mahmoud Hamdy, and Ibrahim Ali, Reservoir Engi-neers in GUPCO presented. The engineers said that the technique is also “economically attractive” as there is no need for injection surface facilities and injection fluid costs.

Surveillance and Monitoring is the key to understand the reservoir performance and identify the opportunities that will improve the ultimate oil recovery and make it more efficient with less as-sociated cost. Surveillance includes surveys related to injection wells – SRT, PFOT, injectivity moni-toring, injection logging.

GUPCO’s Reservoir Engineer, Peter Magdy, emphasized the importance of surveillance for water flooding projects. Surveillance tools such as chemical tracer surveys, saturation logs, and step rate tests help in taking corrective decisions and actions, he explained. In addition, they can be used to identify poorly swept regions, less supported regions, optimize injection targets to maximize the recovery efficiency, and detect early water breakthrough. As a reliable monitoring tool, Magdy fur-ther clarified the importance of the step rate test, explaining that its objective is to obtain for-mation fracture pressure. “Surveillance is the key to understand reservoir performance,” he add-ed. Magdy further presented the “Hall Plot” analysis for assessing the performance of the injector through detecting water injectivity changes that occur over the injection period.

Petrobel shared its experience in maximizing oil recovery in mature fields through integrated studies. Alberto Boccardi, company’s Production Manager, revealed progress of Petrobel in maximizing oil recovery in Belayim Land field when all three EOR Pilots will be completed during 2016 to produce first results for assessment next year. Boccardi added that on-going development of Real Time Data Acquisition and Monitoring system is to help introduce new technology in the field. “The success was mainly achieved due to the accurate and continuous monitoring of field performances,” Boccardi noted.

Several companies presented their experience and achievements on reservoir characterization.

Saber Mostafa Selim, Former Exploration General Manager at Suez Oil Company (SUCO), dis-cussed the importance of the reservoir characterization model used to enhance oil recovery from Nubian Sandstone Reservoir and Ras Budran Field. As he said, it requires a multi-disciplinary ap-proach and effective management of a large amount of data. The results revealed that reservoir and non-reservoir zones should be separated from sedimentary cycles as mappable micro-zones, but some of the thicker micro-zones require further subdivisions.

Similarly, Osama Ahmed Nour, Senior Reservoir Engineer, EGPC, shared the company’s experience on five oil fields in the Kharita formation, in the Western Desert. Eng. Nour explained that deter-mining the best EOR method for the mature fields was the real challenge, and he gave some rec-ommendations for future EOR technology application. In addition, he recommended starting the EOR techniques in Kharita as early as possible, since reservoirs of this formation are almost de-pleted and suffer from sharp decline in oil production.

The final presentation disclosed rejuvenation mechanism in mature fields through STOIIP valida-tion for multi-layered reservoirs, with reference to the complex reservoirs of the Nezzazat group in the Gulf of Suez, Mostafa Mamdouh, Reservoir Engineer in GUPCO showed. The Big Loop simu-lation approach was used to cover all the existing geological uncertainties over reviewing the Nezzazzat Field through a competent model. The history matched model in layer basis has suc-cessfully proved that the dynamic STOIIP is higher than the pre-Study volumetric STOIIP with ± 5 MMBO, which opened a room for a new drill. This has increased the current recovery factor.

The theme of integrated studies was launched with a presentation by Mohamed Fahmy, Senior Reservoir Engineer at Bapetco, who talked about the integrated petrophysical geological approach to model water injection split in multi layering water injection. The case study of the Bahariya formation in NEAG-1 Field, in the Western Desert started in 2010 with the development of a split ration – water injection allocation factor. As of today, as the engineer explained, its margin error is less than 10% and by using this calculation method, a total of expected cost saving is about $500,000.

Colin Cranfield from Baker Hughes also stressed the importance of having an integrated approach to deliver successful EOR projects. He said that “collaboration between oil companies, government, and the service sector through shared logistics and facilities, and commercial alignment is needed.”

Several chemical EOR (CEOR) processes were investigated to increase oil production and maximize ultimate recovery. Among them, Nano-fluid technique, Thermally Activated Particles (TAP), and polymer flooding applications were introduced in the last session of the workshop to increase oil recovery.

Eng. Mohamed Tarek from Cairo University, conducted a comparative study on the application of the Nano-fluid mixture and the conventional EOR. Nano-fluid is the technique, in which Nano-particles are suspended in traditional heat and transfer fluid as water and oil. In this study, Eng. Tarek found out that Nano increases oil recovery factor. In addition, Iron Oxide can increase the injected water viscosity, while Aluminum Oxide and Nickel (II) Nitrates can decrease oil viscosity.

The TAP technique used for improving sweep efficiency in mature fields such as the Belayim Land field of Eni/Petrobel was explored. Massimiliano Mattei presented positive results indicated in the 2009 pilot. In addition, five promising candidates have been selected for a new TAP theory implementation to advance the technology.

Eng. Mostafa Kortam from Petrobel, discussed the polymer flooding application. He explained that key factors that may influence polymer stability and performance such as high reservoir temperature, high brine salinity, and hardness, mechanical degradation and absorption, were all considered. Tertiary corefloods with polymer solution were executed to assess the EOR effect at the core-scale. In the presentation, the results showed a significant additional oil recovery, up to 8% compared to seawater injection.

Waterflooding was discussed by Kuwait Energy, GUPCO, and Petrosilah. Ahmed Rabie, Kuwait En-ergy’s Reservoir Engineer, described a successful application of water injection in the Rudeis IB Reservoir, in the Umm El Yusr Field, Area “A”, in the Eastern Desert. As he explained, the field was producing for over 40 years without pressure support, until April 2013, when after rented a water flood facility the company started the pilot water injection flood with incremental oil gains.

Petrosilah’s Senior Reservoir Engineers, Omer Badawy, and Youssuf Kamal, showed the results of their water flood projects in two major fields – N. Silah and N. Silah Deep. – in the El Fayum con-cession, and their effect on the production profile. PetroSilah’s engineers highlighted cost optimi-zation and a cross-disciplinary cooperation between engineers and geologists, as a key to positive achievements.

Lastly, the challenge of economic trade-offs during the design phase of a waterflooding project was raised. Indeed, often the most impactful and difficult of these decisions involve the modifica-tion of the composition of water injection.