Consolidating the Egyptian-Cypriot Strategic Relations: An Interview with The Cypriot Minister of Energy, Commerce and Industry, Georgios Lakkotrypis 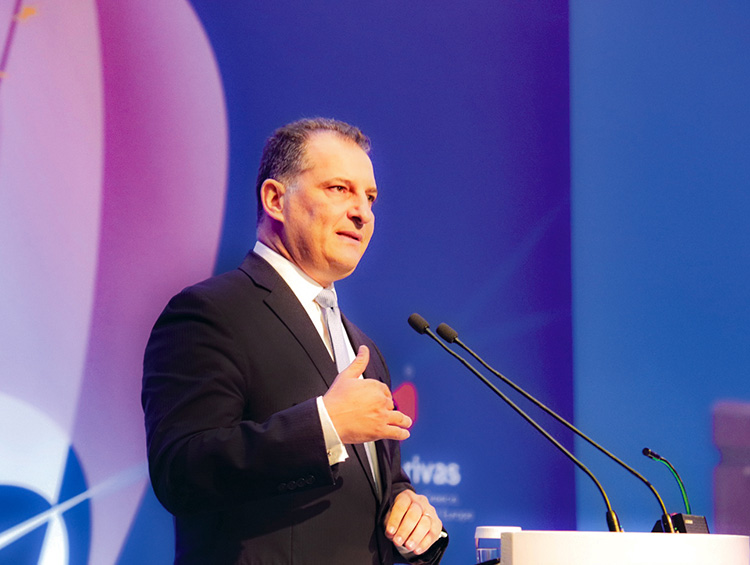 The solid bilateral relations between Egypt and Cyprus, especially under the umbrella of the East Mediterranean Gas Forum (EMGF) held in Egypt in July, represent a cornerstone for developing the natural gas potential in the East Mediterranean region. Egypt Oil & Gas was honoured to conduct an exclusive interview with the Cypriot Minister of Energy, Commerce and Industry, Georgios Lakkotrypis.

In light of EMGF, to what extent do you believe the forum will help deepen the relations between Egypt and Cyprus, specifically, and among the East Mediterranean countries in general?

Egypt and Cyprus already enjoy excellent bilateral relations, with our two nations’ partnership constantly expanding in all areas, including energy. This, of course, is not something new, although our joint efforts have now intensified – a delimitation agreement of our respective Exclusive Economic Zones (EEZs) was signed back in February 2003, whereas a unitisation agreement on the joint exploitation of hydrocarbon reserves was signed in December 2013. More recently, in September 2018, an intergovernmental agreement has been signed between the two countries concerning a direct submarine natural gas pipeline.

As such, Egypt’s initiative to establish in Cairo the EMGF, a platform for energy collaboration that could eventually be elevated into becoming an international organization, certainly adds further value to our energy partnership. At the same time, it has succeeded in bringing together, for the first time ever, the Cypriot, Egyptian, Greek, Israeli, Italian, Jordanian, and Palestinian ministers of energy. As you know, such a gathering would have been unthinkable a mere few years ago and yet today the countries of the Eastern Mediterranean, as well as others who may join in the future, can utilize the EMGF to work together and coordinate efforts, with a view to efficiently exploit the region’s gas potential.

In fact, the EMGF has already attracted great interest and support by individual countries such as the US and France, as well as the European Union (EU) itself.

One of the main targets of the EMGF is to establish an intergovernmental regional gas market. From your point of view, what are the steps needed to achieve that target?

The EMGF, which as I have already mentioned is strongly supported by the EU and the US, is intended to facilitate structured dialogue on technical and commercial cooperation, between producers, consumers, and transit countries in the region.

Admittedly, the Eastern Mediterranean is not the easiest place to do business in, but to cope with increased competition for gas markets from both traditional producers such as Russia and emerging ones such as the US, our region’s countries need to collaborate closely in order to find the optimal export options and create a stable and predictable investment environment. To this end, it is essential that all countries fully respect each other’s sovereignty and sovereign rights in their respective Maritime Zones, in accordance with international law and the United Nations (UN) Convention on the Law of the Sea, as we engage in energy diplomacy to align interests, integrate and optimize infrastructure and, consequently, create the conditions for regional stability and peace.

Currently, a number of export options are under consideration, all adding up to our common goal of creating the EastMed Natural Gas Corridor to European markets. Principal among them is utilizing the region’s existing infrastructure capacity, like the liquefied natural gas (LNG) plants in Egypt, the Arab Gas Pipeline and the regasification units in Greece. At the same time, new infrastructure is also being examined, such as LNG plant in Cyprus, the EastMed Pipeline, and Floating LNG.

All founding members of the EMGF agree that private sector participation is crucial both in the workings of the forum itself, as well as in the regional gas market envisaged by our countries. In this regard, we have decided, during our second ministerial meeting, to establish a dedicated Gas Industry Advisory Committee that will be a permanent platform within the EMGF, supporting its activities. Soon, the first meeting of the Committee will be held in Cairo with the participation of the state-owned entities, international oil companies (IOCs), and financial institutions – in fact, a large number of companies have expressed their interest to take part in the meeting.

The point is that to facilitate our ongoing energy cooperation, there is a need to leverage private sector expertise, funding, and resources. Obviously, this involves the contribution of the oil and gas industry, investors, traders, financing entities, and other stakeholders.

In light of your with meeting the Egyptian Minister of Petroleum and Mineral Resources, Tarek El Molla, what are the future cooperation opportunities that could be created to develop the bilateral ties between the two countries, especially under the umbrella of the EMGF?

During our meeting with the Egyptian Minister of Petroleum Tarek El Molla in Cairo, in the context of October’s Cyprus, Greece, and Egypt Trilateral Summit, we had an opportunity to discuss all areas of cooperation, stressing in particular the need to proceed with establishment of the EMGF. Moreover, we went over our plans to transport “Aphrodite” natural gas to Egypt for liquefaction and also agreed on the importance, for our respective countries’ energy security, of creating an electrical grid between Egypt, Cyprus, and Greece based on the framework agreement signed by the Egyptian Electricity Holding Company and the EuroAfrica Interconnector Company, on May 22, 2019.

The next EMGF Ministerial Meeting will be held in Cairo during the second half of January 2020. What are your expectations for the meeting?

At present, all EMGF member countries are in the process of discussing internally the forum’s proposed statute. Hopefully, an agreement on the final statute can be reached during our third meeting, bringing us another step closer to concluding discussions on the EMGF’s establishment.

In addition, we expect that by then the new Gas Industry Advisory Committee will also be in operation, thus advancing further the founding members’ cooperation.

In your opinion, what are the major footprints Cyprus intends to do to enhance its position among the member countries, generally, and with Egypt, specifically?

Egypt and Cyprus are currently spearheading our regional cooperation efforts, constantly taking initiatives for bilateral, trilateral, and multilateral meetings. EMGF is one such very important initiative undertaken by Egypt. Cyprus on its part, will be hosting a Permanent Secretariat for promoting our various regional cooperation mechanisms.

There is no doubt that as the countries of the Eastern Mediterranean progress their hydrocarbons activities, we all need to work closely together to take advantage of synergies and create the conditions conducive to attracting the necessary multibillion-euro investments. After all, to invest and become active in any region, the first thing sought after by the oil and gas industry is stability.

In this equation, Cyprus is a key parameter, traditionally maintaining excellent relations with the region’s countries, whilst also enjoying access to European stakeholders and decision centers through our EU and eurozone membership.

Egyptian President Abdel Fattah El Sisi approved the governmental agreement between Egypt and Cyprus to establish a direct natural gas subsea pipeline. How will having such a bilateral agreement help deepen the ties between the two countries?

The agreement, signed in Nicosia on September 19, 2018, is in fact the first of its kind in the Eastern Mediterranean. It aims to promote the transport of natural gas from Cyprus’ “Aphrodite” field to Egypt, by safeguarding the secure and timely development, construction, and operation of a direct submarine pipeline across our respective EEZs. Ultimately, through re-exporting “Aphrodite” gas in the form of LNG, the pipeline will allow for the transport of the first molecules of EastMed gas to the EU, thus contributing to the Union’s much sought-after security of supply and diversification of sources and routes.

The agreement itself, of course, is the product of close cooperation between Cypriot and Egyptian authorities, including the two ministries of energy and the Egyptian Natural Gas Company, whilst its implementation will be overseen by a joint monitoring committee that has been established. As such, its drafting and signing have definitely reaffirmed the close traditional ties between Cyprus and Egypt, establishing, in the most formal way, our two nations’ strategic partnership in the energy sector.