COGENERATION IN REFINERIES: A STEP FORWARD FOR ENERGY EFFICIENCY 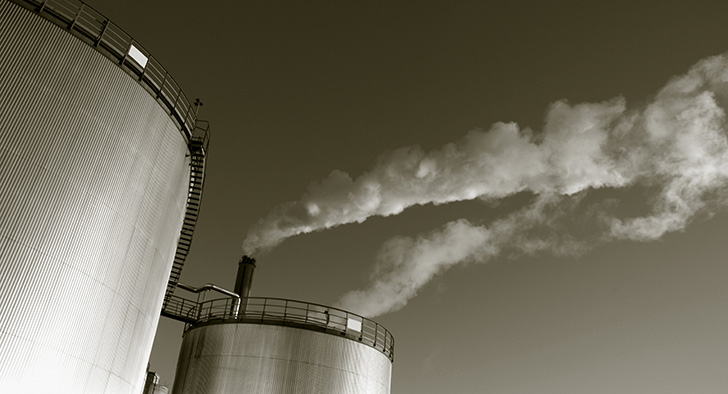 Population growth and rising living standards have continuously increased Egypt’s energy demand faster than the capacity of supply. Since the country’s main source of electricity is natural gas, improving efficiency in the oil and gas power generation is extremely important to overcome Egypt’s ongoing energy shortages and preserve its natural resources.

A highly effective approach to improve energy output is cogeneration; combined heat and power (CHP). Cogeneration takes the wasted energy from the industrial processes and reuses it for electricity and heat from a single fuel source. Refineries worldwide have shown successful results in energy efficiency when combined with cogeneration. When crude oil is refined into lighter products, the refining facility produces a great amount of heat and gases. CHP generators use the wasted heat and industrial gases released to produce electricity and steam to cover its demands onsite. Produced electricity can also be added to the national grid.

Given its importance, CHP will be part of the topics discussed by specialists at the Egypt Petroleum Show (EGYPS), which will be held in Cairo.

Egypt has a great number of refining facilities, which ranks the country the second biggest in Africa. The efficient application of CHP in the Egyptian refineries thus displays a high potential for the technology to play a remarkable role in the oil and gas power generation. Through CHP, the country can benefit not only from energy improvements, but also from cost and fuel savings.

A research by the Microgrid Institute suggested that CHP provides simultaneous thermal and electricity generation, which could cut energy consumption by 35% when compared to having the two tasks done separately. Another research by the Pew Environment Group showed that doubling CHP generation in the United States by 2020 would also eliminate the need for over 200 mid-sized power plants. “When compared to large baseload plants, CHP is a step forward in efficiency gains” and in how energy is produced, according to the US Fresh Energy Organization’s Energy Performance Director, Will Nissen, cited by Mid West Energy News.

ExxonMobil is one of the major oil and gas companies that have adopted CHP as a standard feature in many of its facilities throughout the world. The company has interests in approximately 5,500 MW of cogeneration capacity at more than 100 installations, which is an equivalent to the annual energy needed to power 2.5 million US homes.

In Egypt, electricity is mostly generated from natural gas. Ministerial data of 2013/2014 pointed that natural gas accounts for 77.8% of total fuel consumed in the country, from which 75.2% correspond to the fuel consumed by the power plants connected to the gas network.

Therefore, applying cogeneration to the vast refining field in Egypt would directly affect and reduce the natural gas consumption, since it would add another significant source of electricity.

Decreasing the amount of natural gas used in power generation is extremely important for a nation that has been struggling to stabilize its oil and gas trade balance. With reserves greater than that of Norway or Canada, Egypt began to export gas in the early 2000s. However, the production downturn made it go from being a booming exporter to an importer a decade later. Even with massive discoveries, such as the Zohr offshore field, the largest findings in the region, the trade balance is still a center of attention since the country’s population is growing considerably and power consumption rapidly increases also due to low subsidized energy prices.

Egypt requires an action to reduce imports and help rebalance its trade budget. The extra electricity production from the CHP generator in refineries can assist this reduction, which would not only save finances that cover costly import, but also assure the country’s natural gas resources last for longer.

To date, Egypt’s full energy capacity has been barely enough to accommodate the demand. According to the Middle East Economic Survey, in 2015 the country’s supply was 31.45 GW, which was slightly higher than the peak demand of 30 GW. However, the country has been unable to make full use of its total installed capacity due to energy losses.

The Egyptian Electricity Holding Company (EEHC) pointed out that electricity is being lost during distribution because of considerably aging network. Therefore, connecting cogeneration facilities to the refining plants can significantly reduce this waste, since the energy used onsite would not need to be distributed from the grid.

Moreover, decentralizing forms of electricity generation, with the use of CHP, increase flexibility of system use. Employing CHP is an opportunity to diversify generation, which results in a more robust system that allows more reliable, efficient, and cost-effective use of steam and electricity onsite. Such decentralization also improves local and general security of supply, which minimizes the risk of refineries being left without supplies of electricity and/or heating during operation.

All the energy benefits of cogeneration previously mentioned also provide an enormous positive impact on the environment. As stated by the European Association for the Promotion of Cogeneration (COGEN Europe), CHP is the single biggest solution to the Kyoto’s targets.

In gas-turbine-based cogeneration, there is a very high excess of air – compared with only 15% for the boiler. This high excess air ensures complete combustion, which considerably decreases some harmful emissions, such as carbon monoxide and unburned hydrocarbons. The emissions of carbon dioxide (CO2) are also drastically reduced due to lower consumption of fossil fuels.

The Climate Investment Funds reported that Egypt is among the 11 fastest growing greenhouse gas (GHG) emitting countries in the world, and 70% of GHG are generated from electricity and transport. In 2013, the emissions of CO2 reached 2.4 metric tons, according to the World Bank data, and an increase of 300% in emissions is expected in 2017.

It is therefore important to remember that Egypt’s population is growing quickly, which means that the quality of life in the country can be extremely compromised by the equally fast growing polluting emissions. CHP generators at the refineries would, once again, help Egypt remediate this problem and assure the oil and gas sector meets its environmental responsibilities.

ExxonMobil, for instance, stated it has been reducing CO2 emissions through cogeneration by about 9 million tons a year compared to traditional methods and buying electricity from the market. Similarly, in January 2016, Mexico’s state-owned oil giant, PetroleosMexicanos (Pemex), also announced its plans to invest $3 billion in cogeneration for refineries. The initiative was part of an overall spending of $23 billion in downstream projects to enable the reduction of 7 million tons of CO2 emission a year the country produced.

Even though CHP generators are promising facilities for the Egyptian refineries, some important aspects must be taken into consideration in order to overcome the barriers in the implementation.

In the early 2000’s, Ihab El Massry, who has specialized in studying, developing, and implementing Clean Development Mechanism (CDM) projects in Middle East and North Africa (MENA) and South Asia, published a detailed study on the application of cogeneration in Egypt, and highlighted the main adaptations to be made to apply CHP technology, which still needs to be considered nowadays.

According to El Massry, cogeneration projects are usually complex and require a high level of research, design, installation, and operation. Aiming to meet these requirements, Egypt would have to improve the available assistance for project identification, installation, financing, and implementation. Since the majority of end-users do not have the engineering capability to design and/or install cogeneration systems, the country would have to invest in professionals with cogeneration specialization and updated technology. In the long term, this investment would not only enable CHP application, but would also result in a more developed engineering field.

Another aspect that might discourage betting on cogeneration at refineries is the considerable cost of the facility in its initial phases. However, the fear of investing in cogeneration highlights a lack of end-user awareness on the prospects of the system. In his study, El Massry defends the notion that to attract end-users, “there must be a wide dissemination of the saving results that cogeneration can achieve, so that the idea that it is not cost-effective can be overcome.” As mentioned before, cogeneration provides electricity and fuel savings, which results in significant cost savings. This would translate in Egypt to savings in power generation and natural gas imports.

Furthermore, the North African country would also have to improve its system organization. Communication channels between company management and plant engineers are currently insufficient, and the maintenance of this dialogue is extremely important to assure that potential gains in efficiency are not lost.

Moreover, CHP units would have to be allowed to operate in parallel with the national electric grid and sell back the excess power to the grid. However, there is a risk that sell-back price will be lower than the actual cogeneration system fuel cost. Industrial end-users normally pay an energy charge and a maximum demand charge in case of selling-backs. In case of running the cogeneration plant in parallel with the grid and using the grid as a back-up source, in addition to the previous two charges, end-users would also have to pay a stand-by charge.

El Massry, however, stressed that the biggest challenge remains the tariff subsidy in Egypt. Egyptians enjoy energy tariffs that are bellow the world market levels. The subsidized scheme makes CHP projects harder to be applied, since the actual value of the energy produced would not be reflected in the price currently paid by consumers.

Briefly, Egypt must go through five points to successfully propose CHP projects for its refineries: the project financing, sell-back price, stand-by charge, utility price – which consists of electricity and natural gas, and the environmental concepts to make it more attractive.

Although the mentioned adaptations required might make the implementation of CHP generators in refineries seem a little daring, Egypt would end up losing many investments in the energy sector if it does not upgrade its technology and energy market in the long-term. The aging distribution networks, which have been causing energy losses, are a clear example of how the lack of innovation can affect the country in the future.

All the benefits of cogeneration turned the technology into a growing feature in the oil and gas sector. Concisely, from the industry perspective, cogeneration would enable fuel and energy savings, which can also significantly reduce costs. From the national perspective, the method can remediate Egypt’s distribution losses as CHP is more cost-effective than a central power station, reduces the grid peak demand, and results in a more robust and reliable electricity system. Additionally, it represents a great improvement for the environment, since it considerably reduces polluting emissions.