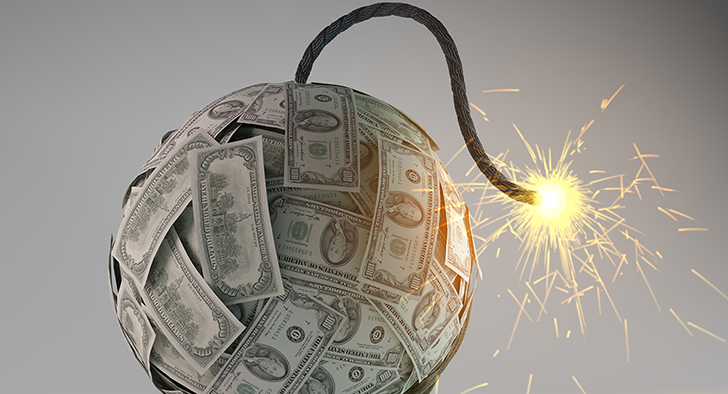 For a country that is already juggling several economic problems, the prospect of saving an additional $300m per year is an exciting piece of news. The amount corresponds with annual losses that Egypt suffers from as a result of 2.5bcm of gas being flared in the country every year, according to preliminary findings of a study conducted by the European Bank for Reconstruction and Development (EBRD).

The gas flaring practice in Egypt resonates with a case study conducted by the Canadian oil field technology company, Berg, which described gas flaring as “literally burning money.” But it is not just the economy that gas flaring is taking a toll on. The practice has unrecoverable implications for the environment and for human health. More gas flaring means more anthropogenic green house gas (GHG) emissions. It poses a threat to human health and ecosystems not only at adjacent flaring sites. In Egypt, flaring leads to more that 3.5 million tons of CO2, or 2% of total annual national emissions. “Further reduction of gas flaring in Egypt can have not only significant economic benefits but will also contribute to meeting the best international environmental standards,” said Philip terWoort, Director of EBRD Operations in Egypt following a thematic workshop in Cairo in March 2016, the Bank informed in a press release.

The elimination of gas flaring can do more than provide additional money to the ailing Egyptian economy. Egypt has 1.8 trillion tons of natural gas reserves, in addition to the newly discovered Zohr. Demand for energy resources is on the rise. If gas reserves are properly utilized, they can satisfactorily supply country’s growing need for energy, as capturing flared gas could provide the country with additional 5% of natural energy needs.

As the oil sector has experienced in the past, international institutions and partners are interested to contribute to industrial improvements in Egypt. The objectives of the EBRD was to assess the extent of gas flaring in the country, demonstrate the business case for associated petroleum gas (APG) recovery, and achieve zero flaring. To date, the Bank has financed over $200 million in projects to reduce flaring in Egypt and is committed to looking into further projects.

Each of those projects has demonstrated commercial viability of APG recovery with different methods and in different geographical/gas flaring areas.

If gas flaring has been dubbed the practice of burning money, it only makes sense that elimination of flaring would boost the economies of oil companies that choose to invest in using associated gas, a by-product of oil extraction, instead of flaring.

Kuwait Energy has received $40 million in EBRD financing to utilize APG methods in its Abu Sennan Concession, located in the Western Desert. To make the most of associated gas, Kuwait Energy opted for a strategy to optimize utilization of hydrocarbons in order to maximize its asset value, Mohamed Atwa, Kuwait Energy’s Senior Production Technology Engineer, stated in a presentation at the Cairo EBRD workshop in March 2016. The company was to focus on capturing and processing associated gas with an aim to supply natural gas to the national power grid and utilize gas as a by-product, which would eliminate gas flaring. According to Atwa, Kuwait Energy’s aim is to increase oil production through the expansion of new fields and meet production targets.

Initially in 2012, the company was awarded five 20-year development licenses in the concession area with four wells drilled. At the time, gas flaring limits at 1mscf/d per license had constrained oil production targets, as there were no gas processing facilities that could have treated associated petroleum gas. Production from those wells was lower than planned, even though the wells had a larger production capacity, but Kuwait Energy was unable to utilize it. The company started searching for ways, in which it could optimize oil production output without exceeding permitted gas flaring levels, and the options were clear. The company simply decided to minimize or eliminate gas flaring, which would translate into higher profits.

Kuwait Energy prepared plans for a project that would utilize APG better. Since calculations for the construction of a brand new gas plant together with the pipeline were estimated to amount to around $45m and work would have taken at least two years, it was evident that this was not a suitable choice.

Therefore, the company opted for an alternative solution. The plan was to use the already existing, but non-operational EGPC gas plant with the capacity of 24mscf/d of gas and a 250km long desert pipeline to transport associated gas from the fields between 2014 and 2015. It approached the EGPC to be allowed using the idle Qarun gas plant, which was constructed about 15 years ago, but left unused since and isolated for the previous eight years.

After the project was implemented, Kuwait Energy has begun seeing the benefits. In 2014, the daily average production from the concession area was 1,864boep/d. With the commissioning of the gas processing plant in April 2015, the production rate increased to 5,988boep/d.

The cost optimization, operational excellence, gas flaring reduction, and oil production boost was achieved. This evidently showed that the optimum utilization of hydrocarbon sources maximized the value of the company’s assets in a long term.

Merlon is another company that the EBRD has supported with funds to reduce the flaring of associated gas. The Bank received $40 million to invest in the commercial recovery of APG in its three fields – Silah, North Silah, and North Silah Deep – located in El Fayoum.

As Carbon Limits stated in a study, presented by TorleifHaugland at a gas flaring workshop in Cairo, the gas utilization in the three oil fields focused on power generation and liquids extraction. The specificity of the locations is water flooding, which had to be calculated in the estimates of power demand at the sites. Carbon Limits’ study concluded that the on-site use of associated gas would be highly profitable for the company as there was an increased demand on power supply due to water wells.

The presented study estimated that production of APG in the three locations was over 1mscf/d in 2015, while local demand for gas reached below 200,000scf/d last year. This means that only some 12% of total associated gas volume was to be consumed. As larger facilities, similar to the Merlon’s fields, tend to have more associated gas than they in reality need for powering their operations, this opens up additional channels for associated gas utilization instead of flaring; such as NGL recovery, transfer of gas for power generation in the national power grid, and export of gas as CNG.

According to Carbon Limits, Merlon’s prospect for the utilization of APG in the sites will increase in the coming years. But the consumption of gas for powering operations in the fields will hardly reach some 30% of produced associated gas until 2020. In 2016, Haugland explained, Merlon’s three sites are estimated to produce 1.3mscf/d, while consume 15% of it, whereby in the future the difference between the amounts of produced and on the sites consumed APG will slowly shrink.

Another majorly available APG utilization option appeared to be NGL recovery in the Merlon’s oil fields. In combination with export of gas as CNG, Carbon Limits calculated that the company will be able to recover up to 80% of associated gas with 262.6kt CO2 emission reduction in the next ten years. In comparison with another utilization mix, when the company would recover associated gas for NGL and electric generation together, the levels of energy recovered would go up as much as 50% and eliminate emissions by 228.1ktCO2 in the same period. In case Merlon would opt merely for substituting diesel with gas, this option promises least considerable results – with as little as 21% of recovered APG and 79.1kt CO2 reduction in emissions. Yet, Carbon Limits concluded that the highest IRR of 253% would actually come from this last mentioned option.

After these companies implemented specific measures to eliminate flaring generating economic benefits, it is also expected that this success would lead to improvements in the environmental segment. Kuwait Energy has managed not only to increase oil production from its existing wells, but also to reduce GHG emissions, company’s Senior Engineer Atwa added at the March workshop. Similarly, Merlon has been aiming for the same target. The EBRD’s website clarifies that the replacement of diesel with gas generators at the sites is expected to reduce the flaring of APG and diesel fuel consumption, which will cause GHG emissions to drop by approximately 15,000 tCO2e per year, once the project is completed.

PICO Petroleum and IPR are two other companies with operations in Egypt that have received financial assistance from the EBRD, each with a loan of $50 million for gas flaring elimination projects, as Gabriel de Lastours, Senior Banker, said at a Egyptian Gas Association’s roundtable in February 2016.

Although the economics and environmental benefits are rather self-explanatory, complex technological requirements for gas flare elimination strategies vary from site to site, which further impacts the selection of viable options.

Utilizing associated gas for the production of condensate through Low Temperature System (LTS) units to separate heavy components from the gas, power generation via 4 MW gas generators, and liquefaction and transportation with the use of 250 tons capacity storage tanks were implemented by the Tanmia Petroleum Company at its ESHPETCO project, explained a company’s representative, AtefKhattab, at the March workshop.

In addition, the reinjection approach was adopted by the General Petroleum Company aiming at gas flaring reduction at its 13 oil gathering sites in Eastern Desert concession fields, which produced 17mscf/d of associated gas. The company applied gas utilization project focusing on reinjecting 9mscf/d of associated gas into oil fields to preserve reservoirs’ capacity, as company’s Gas GM, Engineer Ehab M. El Sherbini, said at the thematic gas flaring workshop. Additional 2mscf/d were used as fuel gas for crude oil processing heaters. GPC aims at further decreasing the flare levels and maximizing the added value of APG by utilizing up to 15mscf/d of total associated gas through LNG, propane, condensate, and pure sulphur production, before the residue gas is reinjected into the field, El Sherbini elaborated. The project thus seeks to reduce gas flare by more than 50%.

For the companies, utilizing flared gas would not only save money but in certain cases also lead to increasing field output. Efficient utilization of APG can provide enough energy to run the fields, while saving liquid fuels such as diesel for other uses. The companies will be major beneficiaries of flaring reduction, but it has to be kept in mind that flaring elimination will have an impact on the environment, and protecting eco-systems as well.

For Egypt, these projects represent merely a starting point to solving the gas flaring conundrum. Therefore, in these days, the government needs to encourage investments in the sector through improving regulations. This could be achieved in different ways, concluded experts, for instance by introducing “gas clauses” in all existing permits.